I wish that my dogs could participate at my synagogue. Yes, Cricket is obstreperous and barky and disruptive, but I’d like to believe that there is something in the music of prayer and the solemnity of the service that would help calm her and give her some relief, the way it does for me. The Rabbi and Cantor at my synagogue like to sing harmonies. I think that was the clincher for me when we visited the synagogue last year and decided to join, the way the music was like a conversation between the two of them.

It would be nice to have an acknowledgment that dogs are members of our families, especially for people like me who don’t have children, or husbands or wives. We get left out of community rituals that would allow us to feel more whole and welcome.

And sometimes, I just feel like I want Butterfly to be sitting on my lap, so I won’t feel so strange to myself in this strange place that isn’t home. She would be my therapy dog, for when I start to twitch and shake and feel self conscious about being in public.

Butterfly’s presence would calm and relax the people around her, except for the occasional stress peeing. And then there would be one less place my dogs would be barred from going. It’s already painful for them that they can’t go to the supermarket.

My synagogue is Reconstructionist and one of their prime directives is to be inclusive of all kinds of people. People, but not dogs? They’ve broken down barriers for intermarried couples and gay couples and women in leadership. Shouldn’t there be some way to break the prejudice against my dogs?

At Friday night services, people wear casual clothes. I started out wearing black dress pants and high heeled boots, because I thought I should, but now I wear jeans and sneakers. There is an aging population at services and they are very accepting of each other’s limitations. They understand the need to be there instead of alone. This is the kind of place that could welcome dogs.

I would have loved there to be a service to welcome Butterfly into our family. I picture something like the Lion King scene where Simba is introduced to the community, raised up high. I would have liked the Rabbi to hold Butterfly up on the pulpit and say a blessing over her and announce her name to the congregation.

When Cricket is sick, it would be nice to be able to go to synagogue and say a public prayer for her recovery. There’s something powerful about putting aside privacy to ask for help from the community, as if we are tapping into an electrical system where everyone’s energy is pooled together. 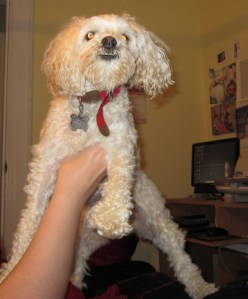 Cricket is less amenable to being raised in the air

On Purim, when we read the story of Esther and use a noise maker, called a grogger, to blot out the name of the bad guy in the story, Haman, the dogs could participate. My dogs, especially Cricket, could be living noisemakers. There could be a whole Hebrew school class for the dogs, to train them for their big day, when they can stand up as a barking choir, and blot out the name of the enemy who tried to harm their humans.

But most of all, I think dogs could bring something unique to a house of worship, because they are not of any particular religious or ethnic persuasion. A Golden Retriever could just as easily, and happily, live with Jews or Muslims or Christians or Buddhists. Dogs are not biased towards one religious group or another. A dog’s presence in the synagogue could be a reminder of the basic spirituality we all share, the God-sense we are all trying to tap into, rather than the specific religion we use to get us there.

I am a fiction writer, a writing coach, and an obsessive chronicler of my dogs' lives.
View all posts by rachelmankowitz »
← DSM Puppy
Shy People Need Dogs →