I took a class in Abnormal Psychology this past semester, and we learned about the Diagnostic and Statistical manual of Mental Disorders, published by the American Psychiatric Association. The DSM is similar to a field guide to birds, without the map to tell you where to find each colorful creature.

There was a lot of excitement, from the teacher, about the new DSM 5 arriving in May, and I began to think, what would a DSM for dogs include?

Hyperbarkia – a disorder in the quantity of the barking and/or the level of hysteria. An occasional woof-woof to mark the passing of a neighbor, or a more persistent bark to note a stranger at the door, can both be within the normal range. Whereas an unending barking spree, lasting twenty minutes or more, or rising to operatic levels, can be a sign that the need-to-bark meter has jammed. 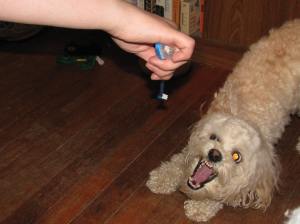 Cricket, a case in point

Foreign object eating disorder – eating rocks and sticks and plastic toys, because those trips to the vet are just so much fun!

Vacuum phobia – when dogs believe that the vacuum cleaner is a giant roaring monster, ready to devour every toy, treat, and dog in its way.

Mailman paranoia is the belief that the mail delivery person is coming to massacre the family, and the only thing standing in his or her way is a tiny barking dog. (I worry that this puts undue stress on Cricket’s heart.) 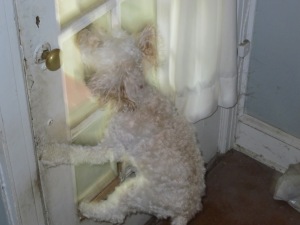 Scratching Addiction is when a dog can get hours of scratchies at a time and never feel like it’s enough. Having an endless void inside of you, that no amount of scratchies can fill, may lead to other addictions, like chicken. Not to be confused with a genuine allergic skin condition. 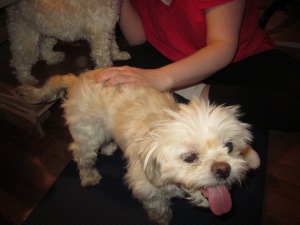 Bone hiding disorder – this can be a normal reaction to a sibling who steals bones, or it can be a miscalculation on the dog’s part, imagining that the humans would steal that dirty, spit covered nylabone, if only they could find it.

PGSD or Post-Grooming Stress Disorder results in flashbacks and tremors at the sign of clippers and the sound of bath water. This can be incredibly disabling and creates the false impression that dogs prefer to be dirty. They do not. They just believe that the process of becoming clean will kill them. 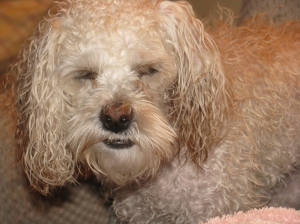 Overly Selfless Dog Disorder is common in Golden Retrievers and other therapy dogs. This disorder can result when a dog is so focused on pleasing her humans, or other dog siblings, that she doesn’t stand up for herself. These dogs can be so good natured and non-confrontational that others take advantage of them or ignore their needs. (Butterfly started out this way, refusing to fight with Cricket over food or leashes or toys. If Cricket wanted something, Butterfly would stand back and leave it to her sister. But she’s getting better at elbowing her way to the food and speaking up when she wants to go outside or eat Grandma’s chicken wings.) 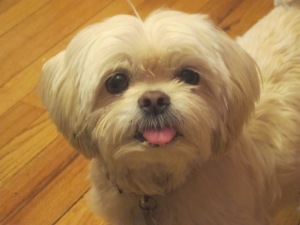 Jumping Bean Disorder – Some dogs have this need to bounce that can’t be repressed. Jack Russells are known for springing so high into the air that they greet human visitors at eye level. (Butterfly has not managed this feat, but she is trying.) 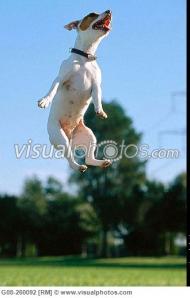 a serious case (not my picture)

Fear of Thunderstorms is very common. I imagine thunder sounds like a huge, unnaturally ferocious, dog standing outside of the house and barking to get in. (Butterfly gets very anxious. Usually she sleeps on her side of the bed, with maybe a paw stretched out to touch me. But during thunderstorms, she climbs on my chest and shakes. Cricket has no fear of the sound of thunder, but she doesn’t like to be out in the rain and get plinked on the head by rain drops.)

Flibbertigibbet Disorder is an unrelentingly positive attitude towards going outside for walks that causes the body to hop and twirl and race around in aimless circles, preventing the attachment of the leash.

Small Dog Syndrome is when dogs under fifteen pounds believe they can intimidate full sized humans, by growling. This is also assumed to work on Fed Ex drivers.

This is my incomplete list of disorders. Clearly further revisions and additions will be needed. This shouldn’t take more than twenty years.

I am a fiction writer, a writing coach, and an obsessive chronicler of my dogs' lives.
View all posts by rachelmankowitz »
← Cricket, the Town Sheriff
Synagogue Dogs →