RSS Feed
← The Grandma Addicts
Listening Like A Dog →

Floracide, or Killing Your Dahlias

My mom takes her gardening so seriously that when the dahlia specialist in the next plot over from her at the community garden started killing off his less than perfect dahlias, she felt like he was killing living things, like small animals, maybe fish. She didn’t fall on the floor crying, or run at him with a gardening fork, which she would have done if he was slicing off the heads of small puppies instead of flowers, but she did feel the flower deaths in her gut, like a punch.

An imperfect Dahlia, on the chopping block.

A bucket of imperfect Dahlias, saved from the compost pile.

This dahlia man clearly believes in killing off anything that is not competition worthy or perfect, even if it is beautiful. And my mom would prefer to keep everything, no matter how imperfect, even if the whole becomes chaotic as a result. I don’t know where I fall on this spectrum.

I’ve recently discovered dead heading. When the marigolds in our home garden were still flourishing, Mom told me to pluck off the dead and dying flowers, to make it possible for more to grow. There’s a satisfying snap to the decapitation of these flowers – like snapping off the end of a piece of asparagus. I was in danger of snapping off the heads of healthy flowers, just to feel the satisfaction of it, when there were no more dead ones left. I can get a little bit carried away. I was saved from becoming a flower killer by the overnight frost that knocked all of the flowers out in one shot. 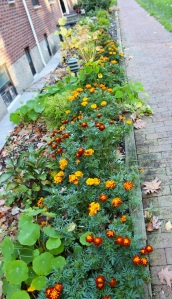 The Marigolds, before the frost.

Snapping the head off of this one would be bad, right?

There’s a piece of writing advice that’s often quoted, that you have to be willing to “kill your darlings” in order to make the whole piece of writing work. You shouldn’t hold on so tightly to the perfect sentence, or the scene you love, or the character who inspired you to write the book, if the book would work better without it. But I’m not sure. Sometimes, if you remove the thing you love most, the whole thing falls apart. I’ve been known to keep the one line I love in a piece, and trash the rest, because the heart of the thing is the most important part.

Cricket has been known to kill flowers. She doesn’t mean to, any more than she means to harm a cat or squirrel who runs past her. She wants to catch it and subdue it and then play with it. With plants, she wants to dig them up, and chew on them, and toss them in the air, and run after them. She likes their taste of green and dirt and bugs. She likes their crunch, and the different textures on her tongue. She plays with cherry tomatoes the way I used to play with a tiny bouncing ball from the treasure chest in the dentist’s office. 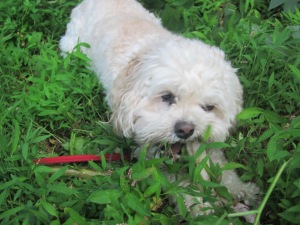 “Play with me, green thing!” 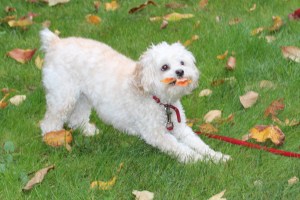 There’s something to be said for letting nature decide which plants to support and which ones to kill off, if only because the feeling of responsibility, and guilt, is too much for me. Winter is the natural death of the growing season. We grieve the loss, but we don’t feel guilty or responsible. The leaf storms at the end of the growing season are like a celebration, a wake for the leaves and flowers, with the dead and dying coming out to dance one last time. 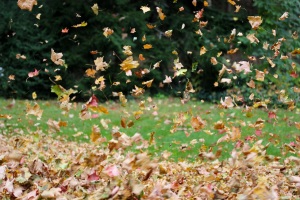 The leaves are dancing!

I am a fiction writer, a writing coach, and an obsessive chronicler of my dogs' lives.
View all posts by rachelmankowitz »
← The Grandma Addicts
Listening Like A Dog →