RSS Feed
← The Purpose of the Sukkah
The Third Act →

Hershey, the last feral cat at my building, has died. I wanted to believe that I was overreacting to her symptoms, especially when I saw her meandering around the property for a couple of weeks after she’d first seemed sick, but I was right to be worried. I started to count days, since the weekend, that I had not seen her around, hoping that I just wasn’t looking closely enough. But then I saw her outdoor house, a box covered in a blue tarp, removed from the alcove next to my neighbor’s apartment, and wrapped up to be taken away.

I asked the maintenance man, sitting on the steps at the last building, if he knew why Hershey’s house was wrapped up, and he said that Hershey had died, and my neighbor had asked him to pack up the cat house because she wouldn’t need it anymore, and maybe because she didn’t want the reminder.

I started sobbing as soon as I got into my apartment. But I was also very, very angry, at my neighbor for not seeking medical help for Hershey when her symptoms began, and at myself, for not confronting her or trying to trap Hershey myself to get her to the doctor. 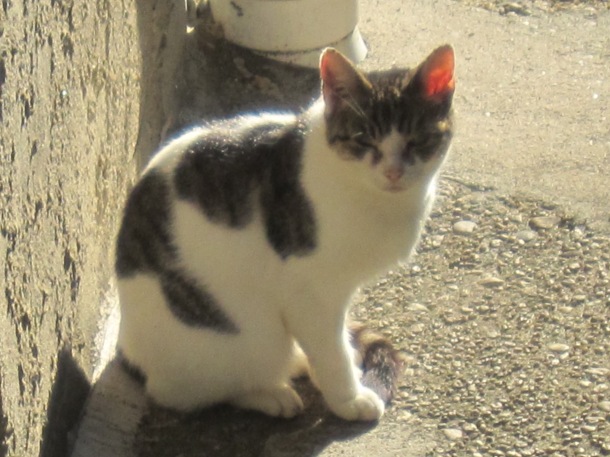 I’ve been told that there used to be fifteen feral cats on the property, and the lawns were dotted with dead mice (and these are the same people who are worried about my dogs peeing on the grass?). One of my neighbors was proactive about trapping the cats, to get them spayed and neutered, and intervening with new litters as soon as possible to get the kittens adopted out if at all possible. He supports a group called Alley Cat Allies based in Washington, DC that advocates for trapping and neutering programs, and helps fund one nearby. He also personally rescued cats that could not survive the feral life, and sought medical care for them whenever possible. Maybe it was all of his work, or just a change in the neighborhood, but by the time Mom and I had moved in, there were only two or three feral cats left. It was hard to tell, actually, because a bunch of my neighbors had indoor/outdoor cats as well, and left front doors or window open for the cats to go wandering on their own schedules, but eventually there were just two, Gimpy and Hershey.

And now there are none.

I’m supposed to be grateful that Hershey lived as long as she did, and as well as she did, as a feral cat. I’m supposed to be philosophical about her death. “That’s nature,” the maintenance man told me, with a shrug. “She wouldn’t have been able to tolerate a visit to the vet, or the medical care required,” another said.

I worry that Hershey caught whatever illness killed Gimpy (the second to last feral cat, who died a month ago, at age thirteen), or that, even worse, someone put out poison that killed both cats, and my dogs might be vulnerable as well.

Before the blue tarp-wrapped cat house was removed from the lawn behind the building, the girls had a chance to sniff their goodbyes to Hershey. They took a long time, checking each crevice, seeming to recognize her smell, and her story, in each corner.

“Hershey has to be here somewhere.”

There are still squirrels, and raccoons, and birds and, of course the dogs, around the place. But there is no more Hershey. I’d gotten used to having her around, and spying her through the greenery of the retaining wall. I’m not used to her being gone. I keep looking for her, everywhere.

I am a fiction writer, a writing coach, and an obsessive chronicler of my dogs' lives.
View all posts by rachelmankowitz »
← The Purpose of the Sukkah
The Third Act →