RSS Feed
← Who do I want to be when I grow up?
Friendship →

We discovered a new dog park practically around the corner from where we live. I don’t know how long it’s been in existence, but it can’t be long, because the grass is still green and the ground hasn’t been chewed up by little paws. There are two separate enclosures, one for the big dogs, and one for the Crickets. There’s a relatively new housing development nearby, so the dog park may have been part of the building contract, but so far people don’t seem to know about it, so every time we go Cricket is the only dog.

On her first visit to the dog park, Cricket performed a perimeter search, to check in with any other dog who may have visited there before her. She is very good at perimeter searches, and was happy to spend all of her time slowly sniffing. On her on her second visit, I walked with her along the fence line, and gently introduced her to the middle of the space. She even did a few running leaps across the grass. But her favorite thing to do was to wait until her humans were sitting on a bench, and then she’d crawl underneath and focus her search on that small area. 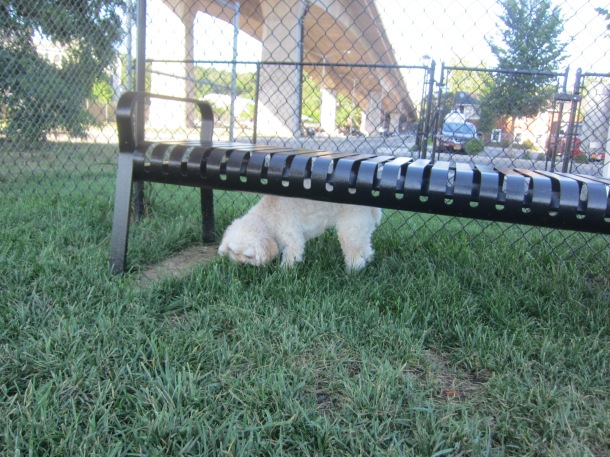 “The grass tastes so good here!”

There’s a body of water next to the dog park that’s meant to add scenic views, but I’m not sure what to call it. It’s connected to the duck pond by underground pipes, and then runs out into the bay, eventually, somehow, but most of the time the water is more like slow moving sludge. Cricket is unimpressed. 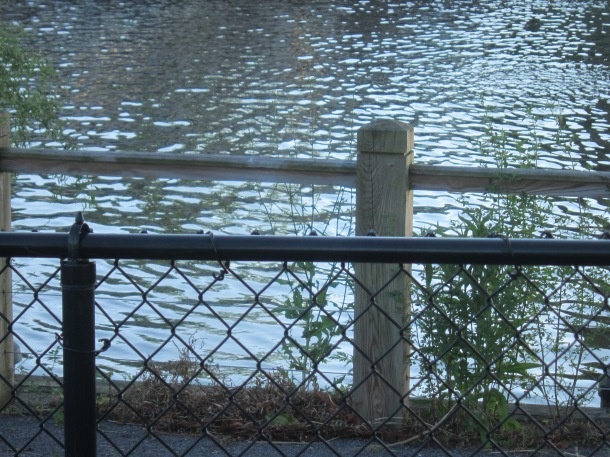 For visit three I finally remembered to bring my camera, if only to prove that Cricket really doesn’t understand how a dog park is supposed to be used. We’ve been going after dinner, when the weather is more tolerable, but we never see other dogs. There was one guy walking along the path outside of the dog run, and two teenage boys trailing marijuana smoke, making Cricket search for an invisible skunk nearby, but other than that we were alone. Cricket checked the perimeter thoroughly, tasting the grass at various locations to make sure it was all just so. I found the skin of a yellow tennis ball on my own perimeter search, so it seems like someone must have been using the dog park for its stated purpose, at some point.

But hopefully not over here.

In the parking lot next to the dog park, each time we’ve been there, there’s been a dog grooming truck. Thank god Cricket hasn’t recognized the picture of a perfectly coiffed poodle on the side of the van, or else we’d never get her out of the car.

We’ll have to go more often to get Cricket used to the purpose of a dog park. I tried to throw a tennis ball for her a few times, but she just looked confused. For such a contrarian of a dog, she was happy to have her leash snapped back on in order to leave the gated area. 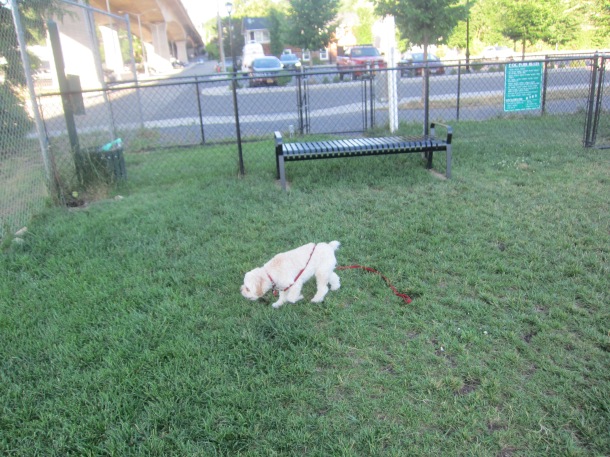 One last sniff of the grass before she leaves, of course

Supposedly there will be outdoor movies, and free concerts, on the piece of grass next to the dog park this summer, but we’ll see if anyone shows up. I think Cricket would like to go to a concert or two, but something tells me the humans might not be very happy to have her there. She likes to participate.

I am a fiction writer, a writing coach, and an obsessive chronicler of my dogs' lives.
View all posts by rachelmankowitz »
← Who do I want to be when I grow up?
Friendship →