RSS Feed
← Going Back to Shul
My Morning at the DMV →

Cricket and Ellie went for their first joint haircut last week, and they came home looking a bit bedraggled. First of all, they both refused to wear the shiny pink and silver hair bows that the groomer was putting on all of the other dogs. Second, Miss Ellie had mats on her ears and tail and was shaved down to the nubs in both places. And, really, Miss Cricket just looked grumpy because we could see her eyes again. But also, Cricket’s back was hurting again. It’s a chronic thing that comes up once every year or two now. 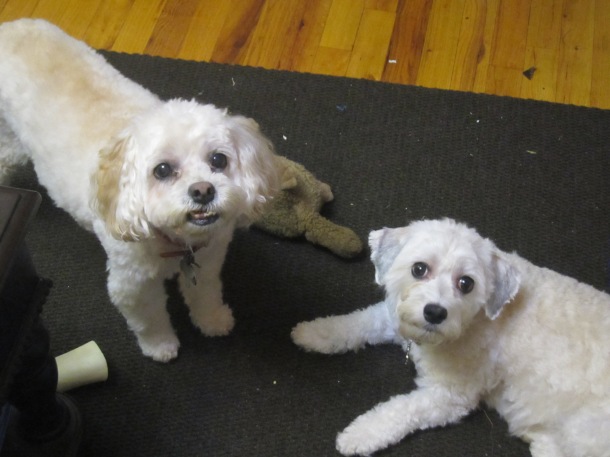 I wanted to wait an extra day before going to the vet, to see if the pain would resolve with rest and massage. We do some light stretches and massage, and then she just leans on me and gives me her poor me look until I give in and continue the massage, or give her extra treats. It was scary watching Miss Cricket struggle going up the stairs, and even refuse to be picked up onto the bed or the couch, but at least I knew what I was looking at, as opposed to the first time she had back problems, when I thought she had developed a fatal neurological disorder.

“What is Mommy talking about?”

Once her eyes were visible again, and she looked as vulnerable as dogly possible, we took Cricket to see the vet. She’d actually gotten herself up onto the couch at breakfast, because Grandma made sausages, and Cricket knew Grandma would want to share. But the stairs were still a problem and we couldn’t hold out sausages for her all day every day. She was, predictably, terrified when we got to the vet’s office. Actually, she was already hyperventilating in the car, squishing herself between my neck and the headrest. When she actually walked into the waiting room, though, she fell in love at first smell with a little dog resting in his mother’s arms. It turned out that he had diabetes, so it’s possible that what Cricket really noticed was that this stranger smelled suspiciously like Miss Butterfly, and therefore he must be worth knowing. 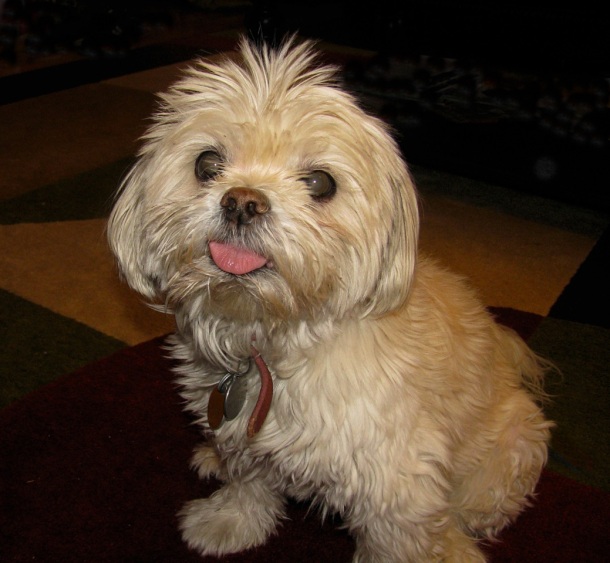 Of course, by the time we saw the vet, he said, eh, no big deal, here’s a shot of cortisone and some pills for the week. And as soon as Cricket left his office she was bouncing like a rubber ball.

Ellie gave Cricket a full sniffing when she came home, and seemed to approve of the vet’s work. Then she went off to play with Cricket’s toys (because all toys belong to Cricket, of course). Cricket has actually seemed to be okay with Ellie playing with the toys, despite Ellie chewing through Ducky’s nose and chopping the top off of the pink plastic vase. But, finally, once she was fully medicated, Cricket hit her limit, because Ellie started to play with Platypus, Cricket’s bestest friend since puppyhood. Cricket didn’t go directly to Ellie with her complaints, though. She went over to Grandma and started barking. Do you need food? Still barking. Water? Still barking. Do you need to go outside? Barking, barking, barking, and glaring over at Ellie who is chewing on Platypus at that exact moment. Aha! Another toy was chosen for Ellie, and Cricket celebrated by mouthing Platypus for a second or two, and then leaving him in the middle of the floor while she returned to her bed for a well-earned nap.

Ellie and the poor nose-less Ducky 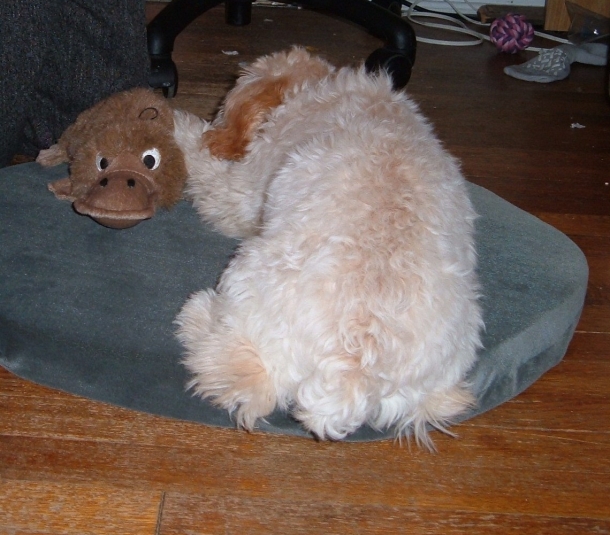 Cricket and her oldest friend

She did get back up, though, when it was time for more peanut butter, I mean medicine. She’s still a little ouchy, and not up to jumping on beds, but she’s not giving me the I’m-dying-and-you’re-just-sitting-there look anymore. So, that’s progress. 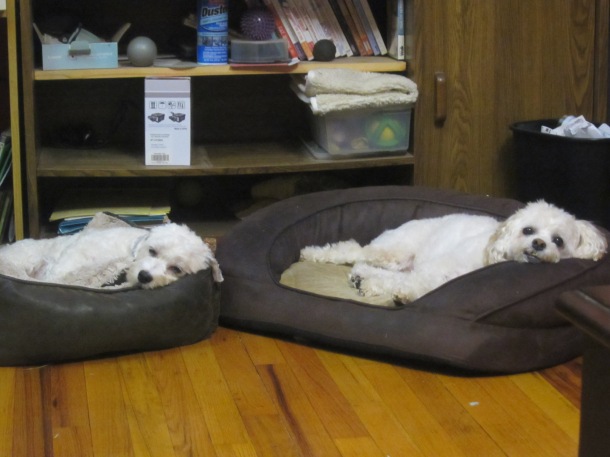 I am a fiction writer, a writing coach, and an obsessive chronicler of my dogs' lives.
View all posts by rachelmankowitz »
← Going Back to Shul
My Morning at the DMV →