RSS Feed
← The Aftermath of Childhood Abuse
The Opioid Epidemic →

The other day, when I was driving home from the drug store, the front of my left foot started to cramp out of nowhere. It didn’t impact my driving, but stretching my toes didn’t help, and even the walk back up to the apartment didn’t make it go away completely. The pain was just annoying enough to make me wonder what I might have done to cause my foot to cramp. Was I doing ballet in my sleep? Have I been pointing and flexing my toes without realizing it?

As soon as I got inside, the dogs were desperate to get outside, so Mom and I leashed them up and followed them out the door. I wasn’t watching the dogs closely, because I was too preoccupied with my own thoughts, about ballet and such, but then Mom pointed out that Ellie was limping and I looked up in time to see Ellie hopping around and then flexing her leg back into an arabesque – her left rear leg. The same foot that was bothering me.

I picked her up and touched her paw, to see if she had something caught between the pads (because Butterfly used to get pieces of kibble stuck in her paw on a regular basis), but there was nothing obvious there. Ellie gave a little shriek when I touched her toes, though, and pulled her foot away. I put her back down on the ground and she proceeded to run, hop, stretch, run, and jump in quick succession. She stretched her left leg back in the arabesque position a few more times but then she put her foot down with her full weight on it. She wasn’t crying as she walked on it, so I left her to finish her dancing and peeing and then led both dogs back into the apartment.

Once inside I figured I could get a better look at her foot if I was sitting down on the couch. Thank God it wasn’t Cricket, because she would have ripped off my hand before letting me touch her foot. Ellie is much more trusting, or at least tolerant. I held Ellie in my lap and picked up her left rear paw to examine it more closely, and that’s when I saw the blood. Some of the blood had rubbed off on the top of her right rear paw, but the wound was clearly localized on the left paw. Mom brought out a damp wash cloth to dab the blood away so I could see what might have caused the injury. I worried that one of her paw pads had gotten cut, or that she had glass in her paw, and I started to catastrophize and plan ahead to calling the vet for an emergency appointment and… Mom calmed me down and continued to dab the paw until I could see more clearly. There was no obvious cut, and I couldn’t see any foreign objects, no glass, or pebbles, or needles, or anything else. Mom found a piece of sterile gauze in the medicine cabinet and managed to wrap it around the top of Ellie’s foot and tie a little knot. Then she suggested that we wait and see if the wound was still bothering Ellie after an hour or two, because Ellie wouldn’t thank me for dragging her to the vet just for a scratch that could easily heal on its own.

And mom was right: the bandage came off quickly, and the bleeding stopped even quicker than that. Within an hour, Ellie was back to her usual cheerful self, with no sign of an injury. I kept an eye out for the rest of the day for any possible delayed reactions – severed ligaments, swollen ankles, blood, tumors, etc. – but she was fine.

Which left me time to contemplate the weirdness: why did I have that random pain in my foot right before Ellie had an injury in the same freaking foot? Is this some new form of ESP that psychics forgot to mention? Am I the dog mommy of the year – literally able to feel my baby’s pain? Or was it just a silly coincidence that I should ignore, and maybe make sure to do my foot and leg stretches more regularly?

I think we are all connected, and I think love connects us on an even deeper, more unfathomable level. And I think, maybe, that this was a sign that Ellie and I have found our wavelength, not just because I happened to be lucky enough to be on a call list when Ellie needed a home; not just because she’s cute and lovable in a generic way; but because we’ve done the work to get to know each other.

Cricket has her very own wavelength.

Ellie has become more and more of her own self over time, sleeping flat on her back with her legs in the air, speaking with her own voice (louder and louder as time passes), and running with her own unimaginable joy as she tries to chase the mourning doves as they escape up into the trees. She is a love bug, burying her head under my chin, leaping up for scratches and hugs when we’re out on a walk, following me everywhere (but especially to the kitchen). She loves me, she loves her Grandma, and she even loves Cricket, who sort of, maybe, tolerates her in return. 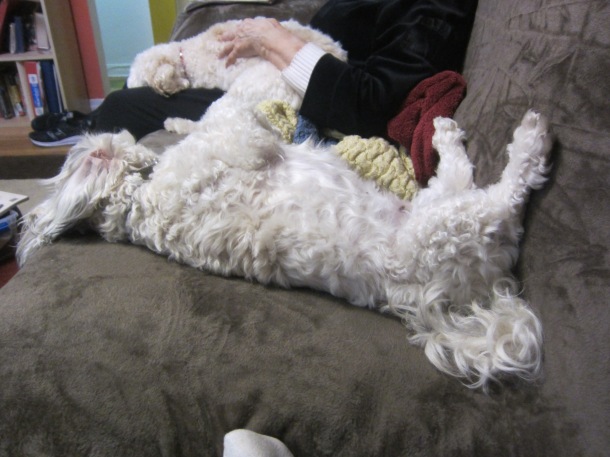 This doesn’t look comfortable to me, but Ellie loves it.

I’m not saying that I want this connection to continue to express itself in foot pain, in fact, I’d rather it find a nicer vocabulary in the future. But it means something, at least to me.

“We don’t believe in this…stuff.”

I am a fiction writer, a writing coach, and an obsessive chronicler of my dogs' lives.
View all posts by rachelmankowitz »
← The Aftermath of Childhood Abuse
The Opioid Epidemic →