RSS Feed
← Musicals at Camp
I Had Two Pawpaw Trees →

Cricket and Ellie have been together for almost a year now, and I think it’s been a long year for Cricket. She wasn’t convinced that she needed a new sister, and she will never acknowledge that having Ellie with her has lowered her anxiety level a few decibels (but it has). 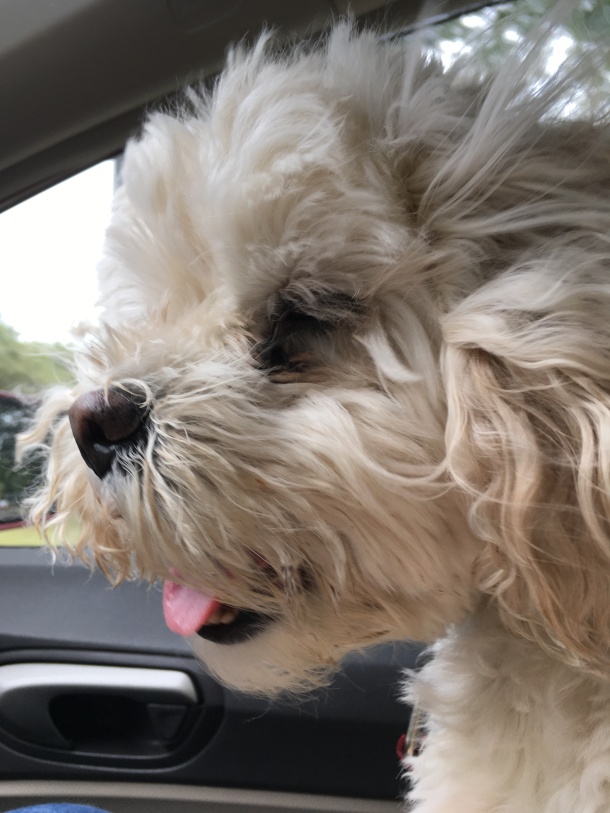 It was luck that we got the call about Ellie on Cricket’s 11th birthday, last year, and were able to pick her up the following day. I’d like to believe that Ellie was, in a way, Cricket’s birthday present, but Cricket didn’t see it that way, especially because, in the turmoil, we forgot to have a celebration with Cricket’s favorite foods (peanut butter, red bell peppers, olives, and, of course, chicken). We tried to make up for it with a week full of chicken, for both of them, but Cricket remembered the slight. 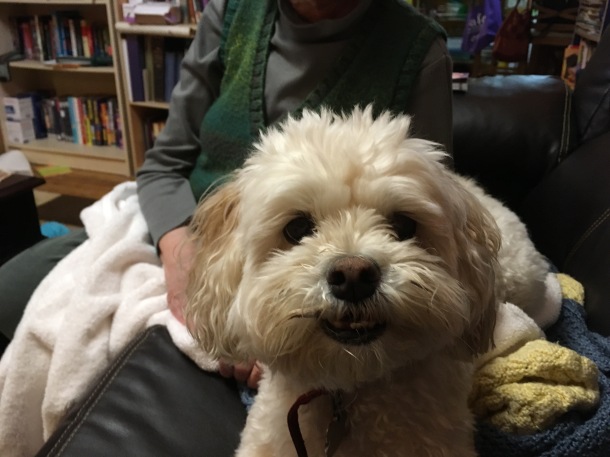 I worry that if we celebrate Ellie’s Gotcha Day, right after Cricket’s 12th birthday, Cricket will feel neglected, or resentful. I mean, more than usual. But Ellie deserves to be celebrated too. She’s found her place in the world, through trial and error, and luck, and quite a lot of therapy, just like me. 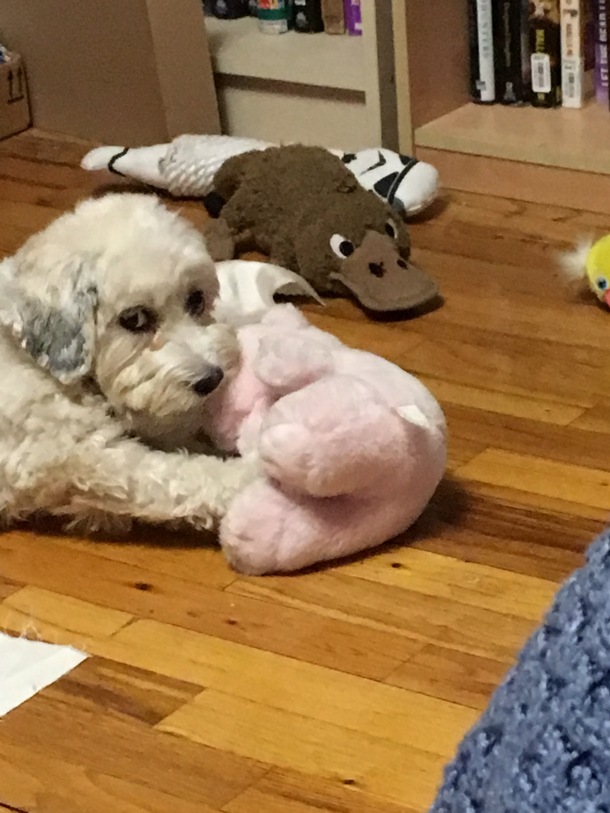 “What are you looking at?”

From the beginning, Ellie has come to therapy with me once a week. My therapist insisted that Ellie should come, not so much for my sake, or even for Ellie’s really, but because my therapist likes having dog patients. She misses her own dogs during the day, now that she works from an office building instead of from home. But it turns out that I like bringing Ellie with me, because it’s the one time of the week when she sits on my lap. At home she prefers to stretch out nearby, on the floor, on the couch, or on the bed, but in therapy she needs more contact. And if I have to talk about something particularly painful I can cuddle with her for comfort, or talk about her as a break from the tension, just for a little while. And therapy has been good for Ellie too. She’s been gradually learning self-calming techniques, and realizing that she has a safe base to return to (me), which allows her to spend more and more time exploring the office. Recently, she even built up the courage to go over to my therapist directly, which she never did early on (though my therapist clearly cheated by bringing in cheese). It’s Ellie’s one hour per week when she gets to go out alone with Mommy, while Cricket stays home with Grandma, and she seems to look forward to it, and know where we’re going, though, really, it could be all about the cheese. 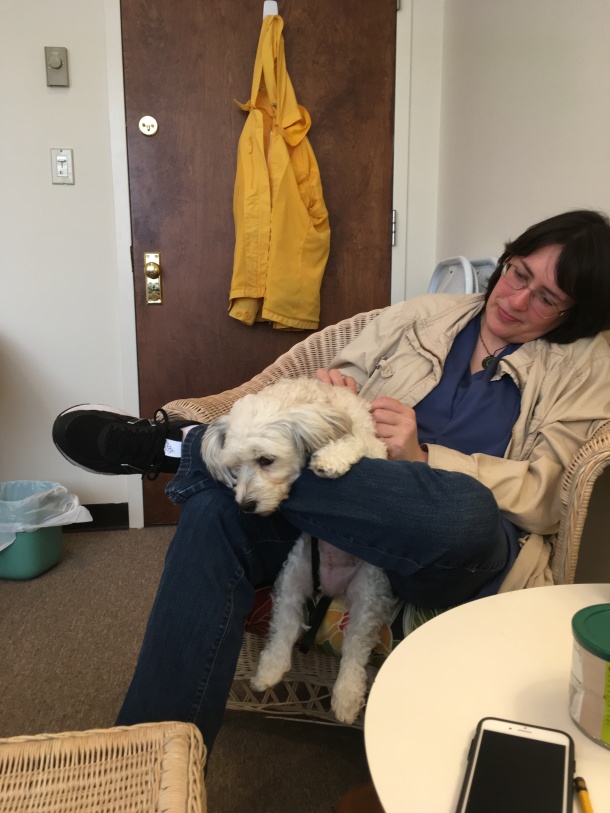 I brought Cricket along with us to therapy one day, when my Mom had her quilting group in the city, and Cricket seemed forlorn at the thought of being left home alone. Cricket used to go to therapy with me herself, when she was a puppy, so she was thrilled to see her therapist again; so thrilled that she peed on the rug three times, and used the furniture, and my therapist, as a jungle gym, and then stole a chocolate-filled candy from the coffee table. All of this while Ellie sat calmly on my lap, bewildered.

Cricket does not believe that she is going to be twelve years old. Yes, she’s had occasional back trouble, and she takes CBD oil each morning to relieve general aches and pains, but she thinks she’s still a puppy, and the fact is, she is still as smart and stubborn as ever. I can see that she has slowed down over time, but that’s only because she used to be a raging speed demon and now she’s not dragging me down the street, as much. In her trip to therapy she forgot her age completely and went back to acting like the puppy she used to be: raging speed demon, excitement peeing, and all. I can’t afford to replace the office carpeting, though, so Cricket will be staying home from now on. 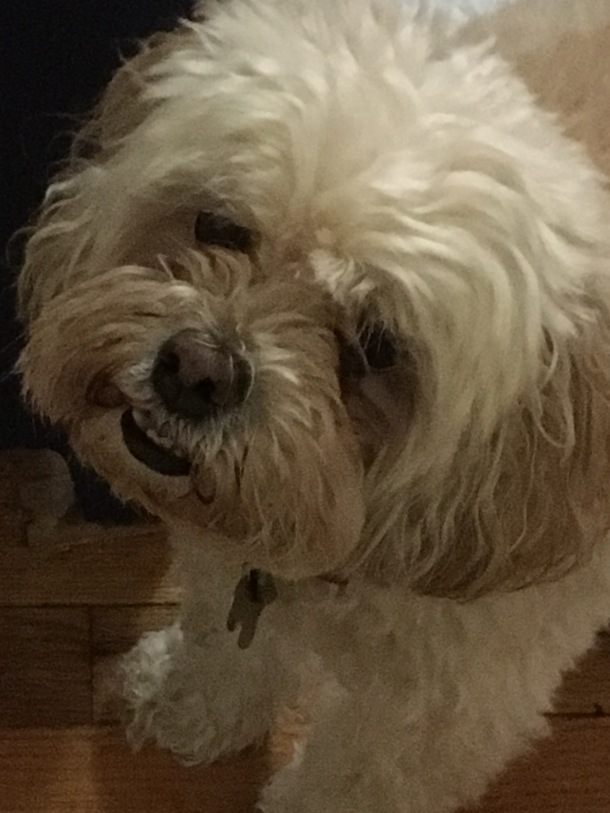 Cricket is still clearly the boss around here. If there’s a plate on the floor, Ellie will run for it, until she sees Cricket out of the corner of her eye, and then she backs off and waits for permission, from Cricket, to lick up the leftovers. Though, Ellie has occasionally ignored her sister’s rules and elbowed for space, when there were scratchies on offer, but not too often.

Ellie generally sleeps in my room, because Cricket won’t allow her up on Grandma’s bed, though Ellie has no problem sharing my bed with Cricket. They often take their afternoon naps with me, each staking out her own territory and stretching out. Ellie has tried to get Cricket to play with her, doing a play bow, or running circles around her out in the yard, but Cricket just gets confused. Cricket can play by herself, or with a human, but she doesn’t understand dog to dog play. It’s just too weird for her.

We will have to find a way to celebrate Cricket’s 12th birthday, and Ellie’s Gotcha day, and their sisterhood, all at once, in a way that Cricket will enjoy. Ideally, I would buy six or seven roasted chickens and hide them strategically around the backyard for the girls to find, but, there are other animals around here, and our yard isn’t fenced in, and, it’s possible that there is such a thing as too much chicken, even for my girls.

I’ll have to keep thinking about this. But in the meantime, I’m going to celebrate the fact that Ellie has made her way into our hearts, and made our world a warmer, happier, funnier place. And if Cricket wants to pretend that she’d be better off as an only dog, panting and shaking with separation anxiety each time we leave the apartment, she can certainly hold on to her illusions. But I know the truth. 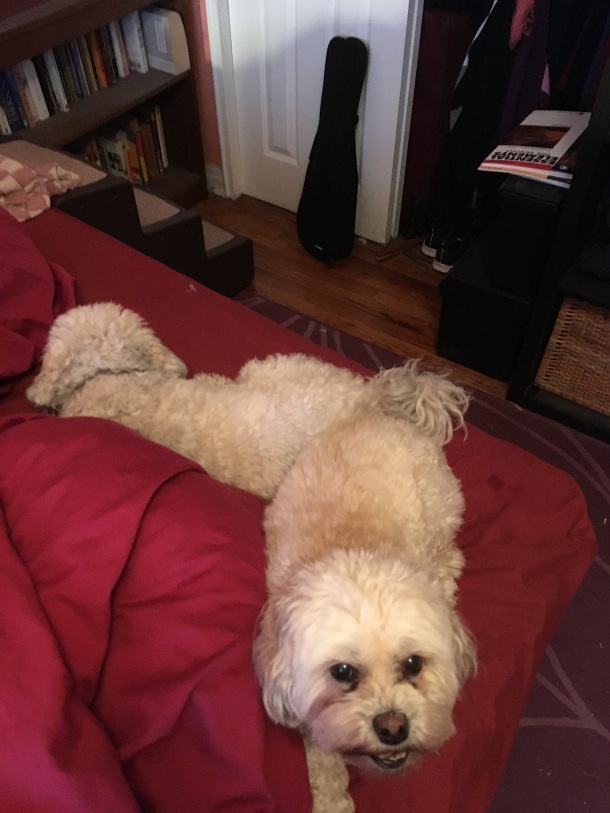 I am a fiction writer, a writing coach, and an obsessive chronicler of my dogs' lives.
View all posts by rachelmankowitz »
← Musicals at Camp
I Had Two Pawpaw Trees →