For a year now, Ellie has struggled to jump up onto the living room couch. It seemed odd, since she can easily jump up onto my bed, which is significantly higher off the ground, but Mom pointed out that there is a rug surrounding my bed, and no rug next to the couch (because when Ellie first moved in she peed through the rugs in the living room and hallway to the point where we were afraid to replace them). 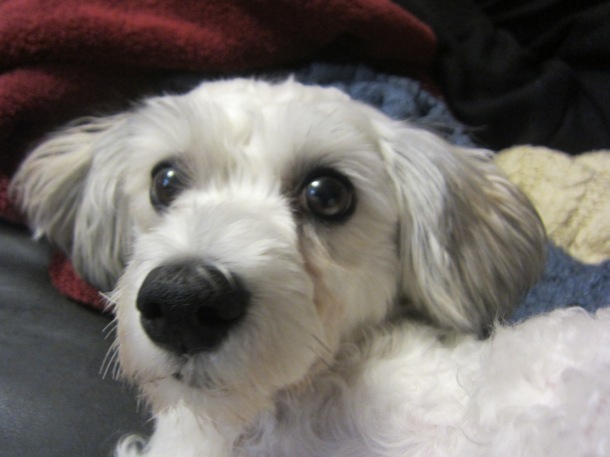 But it’s been a year, and we were at Costco recently and saw a (very) cheap area rug that would fit right in front of the couch. It wouldn’t be a terrible loss if the flood of pee returned to wash it away, but, maybe, we thought, it could be the magic trick to allow Ellie to jump up onto the couch instead of needing the Mommy elevator (that would be me) every time.

I was not especially optimistic: one, because Ellie still pees on the exercise mat in my room on occasion, and two, because I didn’t really understand Mom’s logic about wood floor versus rug as effective transport up to the couch. But it was worth a try.

We got home from Costco too exhausted to set up the new rug (this is a constant. I always look forward to going to Costco and I always come home feeling like I ran a marathon in cement shoes), but later in the day Mom set out the area rug, trapping it in place under the coffee table (or whatever you call a low table on wheels that sits in front of the couch and holds all kinds of miscellaneous tchotchkes).

At first, Ellie didn’t seem to notice the new rug. She saw Cricket sitting up on the couch and came over to me, as usual, with her front paws up in the air, asking for the Mommy elevator. But Mom said not to lift her up. “Encourage her to do it herself,” Mom said, sounding loving and sweet despite the horrible cruelty she was asking me to carry out.

I got distracted by something (dinner, TV show, news alert, whatever) and then noticed that Ellie was stretched out next to me on the couch, with Cricket looking extra grumpy next to her.

And that was it. The magic carpet had done its job! Ellie has been up and down, with no help from me, dozens of times since then. She still can’t figure out how to jump up onto Grandma’s bed – which is no higher than mine and surrounded by a fluffy rug – but I think that has more to do with Cricket’s dirty looks. It is, after all, Cricket’s bed. She kindly allows Grandma to sleep on it, out of noblesse oblige, but that courtesy clearly does not extend to her sister.

There have been no pee puddles on the new rug so far. It’s possible that Ellie has finally figured out that wee wee pads and carpets are not the same thing. Now if only that knowledge could extend to exercise mats…We’ll have to see how things develop.

I might also have to carry a piece of rug with me to place next to the car, so that Ellie will remember that she can jump onto the backseat by herself. Usually she only jumps in after she’s seen her sister doing it, but maybe the rug could work its magic there too.

In the meantime, I started to think that this metaphor might fit me too. Just like Ellie only needed one extra, small step to allow her to make a big step forward, something to help her feel a bit more secure and supported, would the same trick work for me?

Will it work for Platypus?

I’ve been struggling with the social work job search ever since I passed my licensing exam in the spring. I’ve written cover letters and sent out resumes like a good girl, but inside I’m terrified that someone will actually offer me a job, or even an interview, and call my bluff. This next step just seems too enormous to me. Internships and classwork and graduation and the licensing exam were all big things, but they seemed doable. This next jump feels more like jumping off a cliff.

But after watching Ellie’s transformation into a jumping bean, I started to think about what could serve as my area rug, or magic carpet, to make the next step in my life seem more possible. And then I got an email from one of the rabbis at my synagogue, asking if I’d be interested in teaching in the synagogue school this fall. They’d only need me for two hours a week, to teach Hebrew language and Jewish holidays, and I thought about it, for maybe a second, and wrote back: Yes!!!! 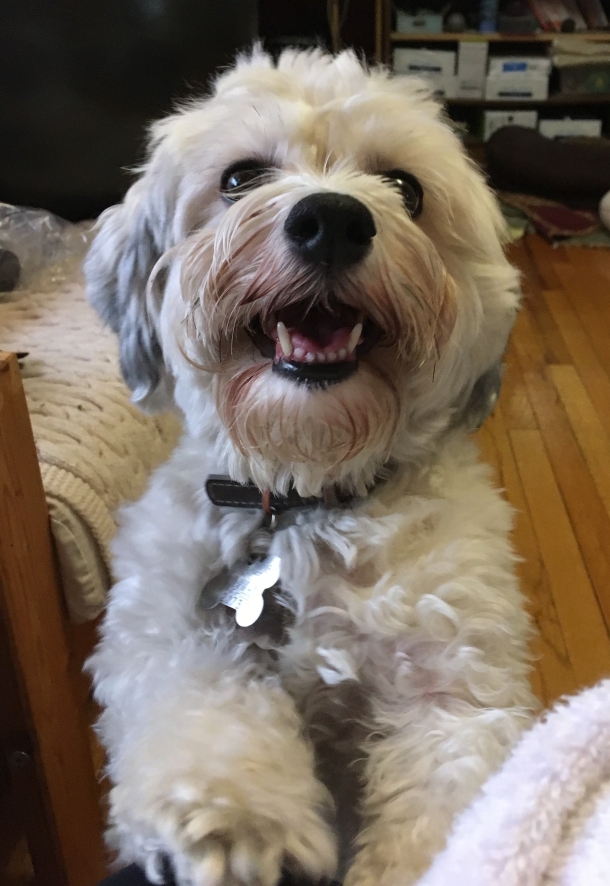 I couldn’t believe I’d written that, and I was even more shocked when I went in for my meeting with the rabbi and couldn’t stop smiling. Teaching? Me? Children?

It’s only two hours a week, so that explains some of the doable-ness, but I think the real magic is that the job is at my synagogue. That’s my safe place. I’ve always been able to do things there that feel impossible everywhere else.

Of course, after I accepted the job, the anxiety flowed in and I started feeling like I had to write out all of my lesson plans for the year within the first twenty-four hours, and all of my internal monsters had to have their say: about what could go wrong, and how badly I could fail, and who would hate me, and on and on. But, surprisingly, but I still wanted to do it. How strange!

It’s possible that some part of me is thinking that this two hour a week job will be instead of a part-time/twenty-hour a week job in social work, but I think it’s more that a deal has been struck internally, if I can have this, then you can have social work. I didn’t even know I wanted to do this, or that I could do it. Just like Ellie didn’t know she needed an area rug to get up onto the couch.

I don’t know where any of this will lead, and it’s possible that I will need a few more metaphorical area rugs to get to the long term goal of becoming a therapist, but now I think they might actually be out there, waiting for me to be ready for them, or waiting for me to imagine them into existence.

We’ll have to see. But for now, I really need to memorize the Alephbet (Hebrew alphabet) song, and practice my Hebrew print writing, and figure out what a lesson plan might be. Wish me luck!

Yeshiva Girl is about a Jewish teenager on Long Island, named Izzy. Her father has been accused of inappropriate sexual behavior with one of his students, which he denies, but Izzy implicitly believes it’s true. Izzy’s father then sends her to a co-ed Orthodox yeshiva for tenth grade, out of the blue, as if she’s the one who needs to be fixed. Izzy, in pain and looking for people she can trust, finds that religious people are much more complicated than she had expected. Some, like her father, may use religion as a place to hide, but others search for and find comfort, and community, and even enlightenment. The question is, what will Izzy find?

I am a fiction writer, a writing coach, and an obsessive chronicler of my dogs' lives.
View all posts by rachelmankowitz »
← The Slow Fast Day
Cricket Bites →