Two weeks ago, on Friday morning, we took the dogs to the groomer for their regular appointment. Butterfly’s hair was turning grey around the ears (she’s a white dog) and Cricket’s eyes were disappearing into a mop of hair. My biggest concern, though, was the hair in Cricket’s ears. I’d asked the groomer to pull the matted hair from her ears, every time, but somehow it rarely happened. So this time, I was insistent. Whatever else you do, I said, make sure to deal with her ears.

When we picked the girls up that afternoon, everything seemed fine. Cricket was flapping her ears a bit, but that seemed reasonable given that they’d not only plucked the hair from the inside of her ears, they’d shaved the mats off the outside too, making her look even more like a little lamb. Butterfly started sniffing at Cricket’s ears almost immediately, but it’s something she tends to do, sniffing Cricket’s ears, nose, butt, etc., for secret messages, so I didn’t take too much notice. On Saturday, though, I noticed that Cricket was still flapping her ears. I managed to feel the inside of one of her ears, for a second, and I felt something hard, as if the skin where the hair had been plucked was scabbed. Cricket wasn’t interested in letting me look more closely, though, and I figured it was probably no big deal.

“Mommy, why does Butterfly keep sniffing my ear?” 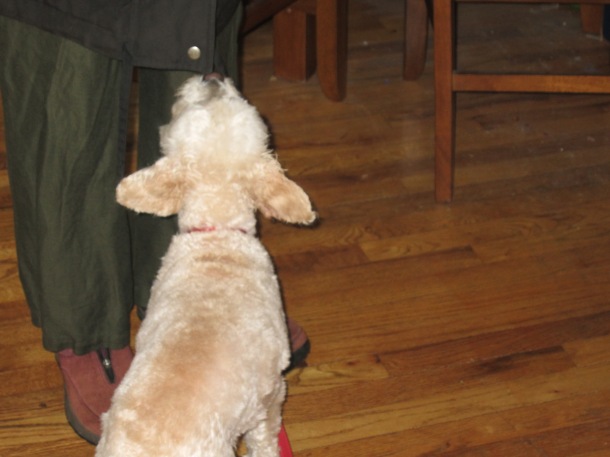 By Sunday afternoon, Cricket was flapping her ears so much that I thought she was going to give herself whiplash, and then I noticed this strange smell. I wasn’t sure if the smell was coming from Cricket, though. In fact, I assumed there was some food in the garbage can that was beginning to rot. 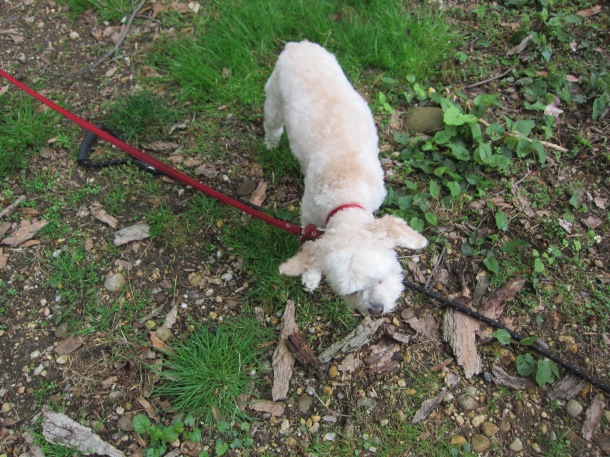 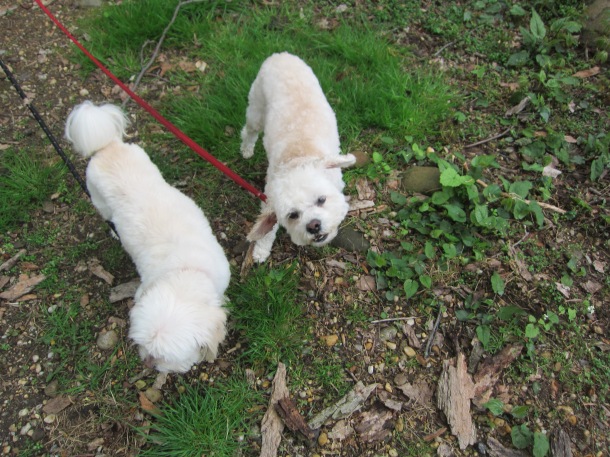 “Mommy, I think Cricket’s ears are going to fly away.”

On Sunday night, after emptying all of the garbage cans to no avail, I was finally able to look directly inside of Cricket’s right ear, and I saw a ring of brown pus, surrounding livid red skin. My stomach dropped, from the guilt, and the smell, and an incredible amount of anger at the groomer, for doing this to Cricket, and for not telling me what she’d done.

At eight thirty Monday morning, when the vet’s office opened, I called and got an emergency appointment. There was just enough time to wake up everyone before we had to leave (Cricket was sleeping on her grandma’s head, and Butterfly was sleeping-guard next to the bed). Cricket was excited, as usual, to go outside without her sister, and get in the car without her sister, and climb behind my head in the passenger seat. But as soon as we got to the vet’s waiting room, she tried to run back out the front door, and failing that, she hid under the bench. Cricket is a terrible patient. The only part of illness she can handle is taking a pill, slathered in peanut butter. Going to the vet and being man-handled? No way.

We were called in quickly, and the vet took one look at her ears and almost gasped. He’s not really a gasper, by nature, but he came close this time. He had to clean out both of Cricket’s ears, with cotton balls and long Q-tips, and then he gave her a shot to calm the redness, and drops in her ears, all with a muzzle on, because she was not handling the stress very well at all. He asked, twice, if we’d rather have her put out during the ordeal, but, knowing Cricket, I thought she’d be even angrier waking up from anesthesia.

The vet gave us ear drops to give Cricket at home, twice a day, and Mom said, of course we can do that. The vet said that if we couldn’t get the drops in her ears, the second best option was to put something else in her ears (at the office) that would last a few weeks. No, we can do it, Mom said, as she looked at Cricket on the stainless steel table, wearing her muzzle, with her eyes bugged out, and clearly imagined a completely different dog. 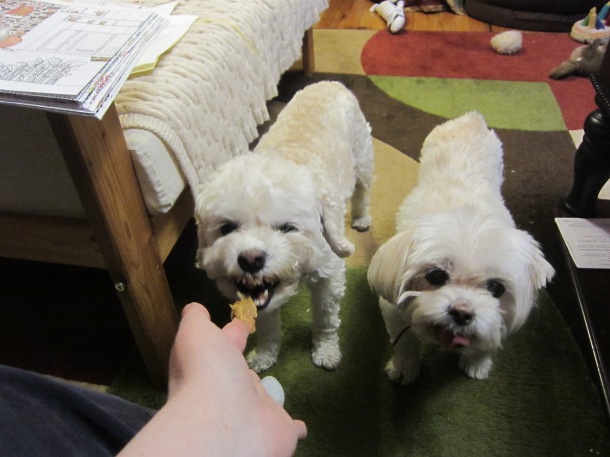 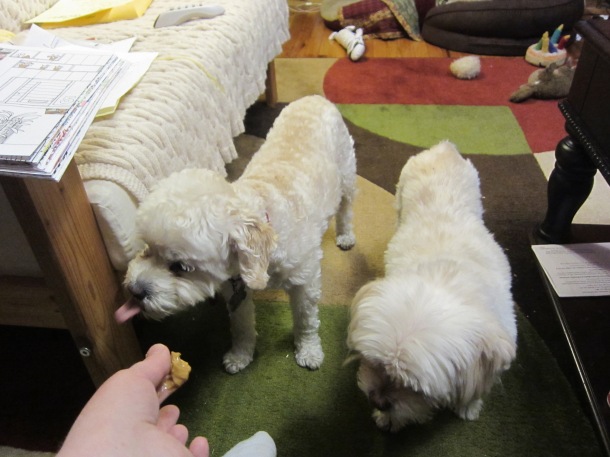 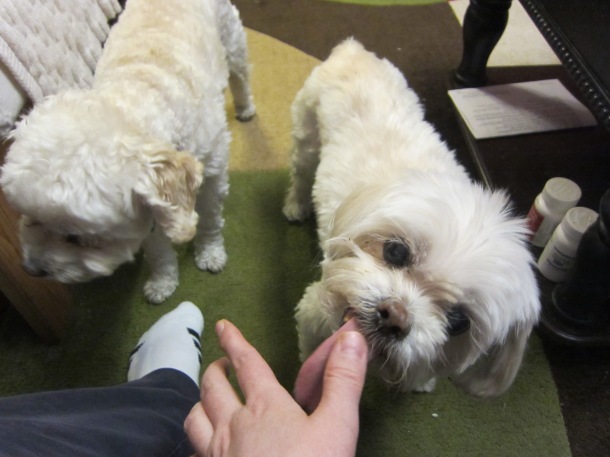 I actually managed to get drops into one of Cricket’s ears, in fifteen attempts, but not in the really bad ear. Cricket bared her teeth at me each time, and swung her head around 360 degrees as if she was possessed by Satan each time I got anywhere near her with the medicine dropper. So we had to go back to the vet, in defeat, the next day, and have him do the second best option. Cricket had to be dragged into the examining room (it’s a good thing the floor is slippery), and then she ran into the corner of the examining room, trying to avoid the reality that she was in the vet’s office, where who knew what horrors could come next. The vet dropped the lotion into her ears in two seconds, before Cricket could build herself up to full hysteria, and then off we went.

The doctor checked Cricket again on Thursday morning, and pulled some more hair out of her bad ear like it was so much fluff. Cricket’s eyes bugged out, and she had to be held still by the vet tech so that she wouldn’t jump off the table, and then the vet told us to come back for one more check-up the following week. I’m not in love with watching Cricket panic as she’s called into the examining room, but I feel like we’re really well taken care of by this doctor, and I wish that we could find a groomer who made us feel the same way. I thought we had, actually. This was the first groomer (after many tries) that Cricket could tolerate long enough to get an actual haircut, and she’s been going there for years.

The thing is, I still don’t understand what went wrong. How come Cricket wasn’t whimpering in pain, or bleeding, right after the grooming? Did they put something on the wound to stop the bleeding and numb the pain, and just not tell us? The other thing is, the scabs were already growing out with new hair in less than a week, and that seems really fast for new growth. The hair inside of the ear is supposed to be plucked at the root, to keep it from growing back so quickly, so, did the groomer shave the inside of Cricket’s ear, and push too hard, shaving off layers of skin?

The vet actually knows Cricket’s groomer and usually trusts her. He said that, from now on, we should come to him every two months to have him remove Cricket’s ear hair, and never let the groomer do it again. I’m sure Cricket will be thrilled when she figures out that she’ll be going to the groomer and the vet on a regular basis for the foreseeable future.

When we got home from the third vet visit of the week, Butterfly had to sniff Cricket all over, to second check his methods and diagnosis, and she seemed satisfied with his work.

I could tell that Cricket was starting to feel better when she scratched her ear against the floor, a sign that her ears were not quite as sensitive anymore. And then she felt so much better that she risked scratching her ear with a paw, though she did sniff the paw afterwards, to check for lingering infection, or just because. She’s like an eight year old boy in a dog costume.

I am a fiction writer, a writing coach, and an obsessive chronicler of my dogs' lives.
View all posts by rachelmankowitz »
← Sitting Shiva
The Sounds of Spring →