It’s so hard for me to corral my thoughts, sometimes. It feels like I’m picking up shards of glass from the floor and trying to piece them back together again. I can recall, or at least summarize, what someone else has said to me, but my own words dissipate into the air much more quickly. Most of the time, I feel like my memories pop up out of order, but if I can write each thought down when it comes to me, and finish the thought three days later when my brain finally gives me the last few words, I can edit it all into a coherent whole and seem like I know what the hell I’m talking about.

I watched two medical dramas on TV, recently, that made plot points out of people whose hearts were on the wrong side of their bodies. And I thought, huh, consider how many things we assume have to be a certain way, like, the heart has to be on the left, and yet, it doesn’t have to be that way, it just happens to be on the left, and all of our assumptions ensue from there. A lot of brain research has been done to try and locate the specific areas of the brain that control different kinds of thoughts. But what if it’s different in each brain? What if we organize the furniture of our brains as differently as we organize the furniture in our homes?

I have different types of bookcases scattered in different rooms. I have hard copies of every writing project in process (there are a lot of them), because when they are only on the computer, I forget that they exist. I have a particular antipathy towards closed drawers, so I tend to keep everything on open shelves, when possible, because it’s too easy to hide things from myself.

Cricket’s mind is a series of hot buttons. Grandma! Food! Shoes! Mailman! Leash! I picture these areas in her brain lighting up in bright red, and it takes a long time to return to a calm pink color. And when any of the bright red areas are lit up, no other thought is possible. It’s only when her brain is cool and calm that she can use her significant intelligence to manipulate her people again. She has set patterns to follow for how to wake up Grandma (bark, scratch, cry, bite ankles), or how to remind me that it’s time for treats (stare at bag of treats, stare at me, stare at bag of treats, crawl under couch and stare at me with disappointed puppy face). And she has incredible long term memory for faces, and smells, and wrongs done to her. 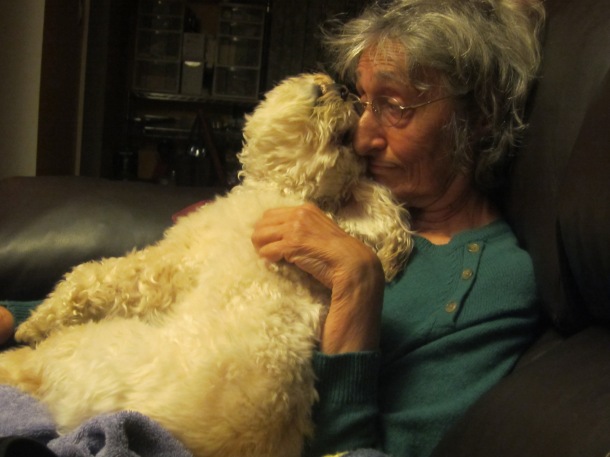 Cricket, working her magic on Grandma.

I like to watch the way Butterfly sets out her kibble on the floor. She places one piece in front of the bathroom door. She radiates kibble out from her food bowl in a messy half-moon. She sets out five or six pieces of kibble on the rug in the living room, like a set of jacks she’s getting ready to scoop up with her paw. Each kibble gesture represents part of the way her brain is set up. She likes to leave kibble, and unfinished chewies, scattered around the apartment, just in case. “Just in case,” is a big theme for her. When we go out for a short walk, she has to have a snack first, and during, and after, just in case. I can relate to this. 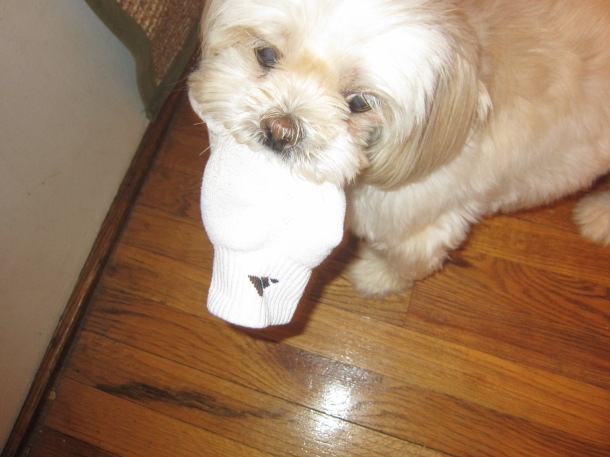 “Mommy, I’ll trade you this sock for a chicken treat.”

I struggle to make the world stand still long enough so I can see it clearly, or see it the same way two times in a row, so maybe all of my obsessive writing is my version of “just in case.” My brain feels like a kaleidoscope at times: chock full of pieces of things all moving around and refusing to organize themselves into single whole. But it can still be beautiful, in its pieces, and being able to see things in new configurations all the time allows me to see more complexity in how each part of me relates to every other part.

“Do you know what Mommy is talking about?”

I am a fiction writer, a writing coach, and an obsessive chronicler of my dogs' lives.
View all posts by rachelmankowitz »
← The Search For Meaning
Thin Skin →