RSS Feed
← The Baby Has Left the Building
Sacred Space →

We’ve had two feral cats on the property of our co-op, until recently. Gimpy, the brown and grey cat with the wounded paw, died. Gimpy was here when we first moved in, running down from the woods to get his lunch, and then running back up. His benefactor on the other side of the building put his food out under a piece of slanted glass, to protect it as much as possible from the rain, and give him a semi-private place to eat his meal in peace. In the winter, Gimpy left tracks in the snow, complicated designs that showed how extensively he explored the grounds, and how lightly his paws indented the surface. He was a very self-sufficient creature, and was able to survive a serious, bloody wound to one of his forelegs, a few years back, that left him with only three working legs and his nickname.

Gimpy was often hiding under bushes, or spying from the corner of the building. He probably had a lot of stories to tell, but he wasn’t willing to share them with me. Towards the end, though, when he was getting run down with whatever illness eventually did him in, he was more sociable He was willing to stand longer on the walkway when I came by, and even rested out in the open sometimes, where anyone could see or smell him.

Not long before he died, my mother noticed Gimpy sitting in front of our building. He didn’t budge as she and the dogs walked within inches of him. She came to get me, but when I went outside to see him, he was able to gather enough energy to run away. But he only ran about ten feet, to the other side of our doorway, where he had to rest again. We left a message for the neighbor who had looked after him, to let him know that Gimpy seemed unwell.

The news of Gimpy’s death came third hand, without any details about time, or day, or cause of death. But we had already noticed that he wasn’t around.

The other feral cat is Hershey, a white cat with brown and black markings, who was “adopted” by another neighbor who places food for Hershey right by her apartment window, in a protected alcove, shredding chicken for her by hand. Hershey likes to rest on the retaining wall, or in a flower pot in her alcove, or by the maintenance shed. Her answer to approaching dogs is to remain absolutely still, in the hopes that they won’t notice her, and it usually works. 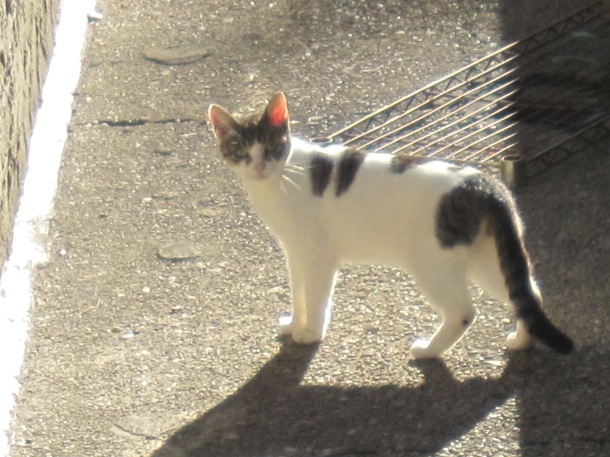 “What are you looking at, human?”

“You can leave now.”

A couple of weeks ago, when I was out on a walk with the dogs, Hershey was sick right in front of us. Usually she hides her poop, but she had diarrhea out in the open, and it was a pale, greyish white. There were various older puddles nearby as well. She sat in front of the window of the neighbor who feeds her, mewing, ignoring the bowls of food and water that had been left for her on the nearby steps.

We let her benefactress know, not only what I’d seen for myself, but what I’d found when I googled Hershey’s symptoms; that mostly likely, she had liver disease. Her symptoms could have been caused by any number of things, and could even be a passing illness of no lasting consequence, but with Gimpy’s death so fresh in my mind, and Hershey looking thinner than usual, I was concerned. She’s feral in name only. She may even have other homes she visits for TLC and extra meals on a regular basis.

The next day, there were puddles of pink, filled with all manner of indigestible things. I think our neighbor had given her Pepto Bismal, thinking it was just light indigestion. I hoped she was right.

Hershey is not my cat. She does not come to my door to ask for food, and would not tolerate or accept my attentions. And she is still alive, weeks later, so maybe my anxiety was outsized, and she’ll be fine. Each time I see her moseying up the walkway or hiding in the flower pot, I breathe a sigh of relief. But it doesn’t last long, because I’m still afraid that she’s dying. She sat in her flower pot, unmoving, for hours the other day. I really want her to be okay, because I’ve lost enough lately, and she has squirmed her way into my heart, whether she meant to or not.

Hershey, resting in her flower pot.

I am a fiction writer, a writing coach, and an obsessive chronicler of my dogs' lives.
View all posts by rachelmankowitz »
← The Baby Has Left the Building
Sacred Space →