RSS Feed
← Those Pesky Expectations
The Last Interfaith Bible Seminar, for the year →

I finally decided to go to the every other Tuesday night choir rehearsals at my synagogue. They’ve been calling them Tuneful Tuesdays, as a way of separating them out from the formal summer rehearsals leading up to the high holidays, because they say that the purpose of these alternate Tuesday nights is really just to give people a place to sing together, and maybe to have a spiritual experience, or at least a communal one.

I had been considering going to Tuneful Tuesdays ever since I finished my second internship for social work school, but the clincher came when I went to services one day and the cantor happened to hear me sing and asked me to come for the Tuesday nights. I like praise. I could do with a lot more of that in my life, that’s one of the reasons why I have dogs: they love to show love, and to tell me that I’m special to them. It happens multiple times a day, especially if I leave the apartment for a minute and come back in.

I was hoping that there would be a lot of people at the rehearsals and I could hide in the crowd, but so far there have only been six to eight people on any given night. I was also hoping for low stress singalongs, but instead we’re doing the three and four part harmonies that I dreaded. The discipline of singing my own line, while others sing in opposition, is not fun for me. It’s actually the opposite of what I wanted, because it separates me out, instead of joining me together.

I am one of the only Altos, which means that they are happy to have me and have already decided that I have joined the choir, rather than trying it out, which is what I thought I was doing. I want to sing more, but I am still uneasy performing in front of an audience. I’m much more comfortable singing within the audience, but it’s a limitation that I feel the need to push at. There are so many things I want to do that require being front and center instead of hidden in the back.

The Tuneful Tuesday group is led by the Cantor of our synagogue, and by the band leader, who is now a rabbinical student. They have similar facility and expertise with music, which is intimidating. They can both sit down at the piano and play whatever is in front of them exactly as written, or change keys at a moment’s notice, and they can both sing whichever part of the harmony doesn’t have enough singers. When I listen to them I feel like a dodo for ever thinking I knew anything about music. But then I remember singing for my oldest nephew when he was a baby, and how he would reach out to touch my lips, in awe, to see where the sound was coming from, and then he’d make a big O with his mouth to try to imitate me. He doesn’t remember any of this.

Each Tuneful Tuesday session has been overwhelming, so far: either because a song is in 7/8 time, which seems to mean that the next note comes up much faster than I expect it to; or because a song is so crowded with notes that I can barely breathe until the whole thing is over; or because we only do a couple of sing-throughs before we start adding harmonies, and I can’t keep track of which notes I’m supposed to sing.

I ask for help whenever I’m struggling, which makes me feel like a moron, but the cantor and the rabbinical student are always kind and understanding; they answer my questions and offer explanations when I’m confused. But I wish I could bring Cricket and Ellie with me. They could help me feel less self-conscious, unless Cricket decided to bite someone, which would make me even more self-conscious.

“I only bite people when they deserve it.”

My goal was to force myself to go to the Tuneful Tuesday sessions at least four times before deciding whether or not it’s right for me, but on the fourth session I found out that there’s a performance coming up, with only two more rehearsals, and all new songs, and the only other Alto isn’t sure she’ll be there. Maybe it would have been okay if we’d started rehearsing these songs months ago, or if someone had responded to any of my concerns with actual concern instead of a patronizing pat on the head. But what I kept hearing in my head for the whole hour and a half was: you’re a loser; you just don’t have the talent; you don’t try hard enough; you’re letting everyone down; it’s all your fault.

The first two songs were taught without written music, and there’s no recording available, so we can’t practice on our own even if we wanted to. The third piece of music is a complicated four part harmony, so complicated that when I looked down at the page I had no idea what I was looking at and I wasn’t convinced it was actually music.

This was not fun.

I wanted to be excited about singing again. I wanted to warm up my voice and learn some new things. I didn’t want to scare myself to death. But now I’m afraid to let people down, because they’ve developed expectations of me that I didn’t want them to have, and they are going to be disappointed in me and I hate disappointing people.

I haven’t decided what to do about this yet, but I do know that, no matter what happens, I will get to come home to Cricket and Ellie and their kisses and cries that I’ve been gone too long. I really don’t know how anyone gets through the tough days without having a dog (or two) waiting at home. 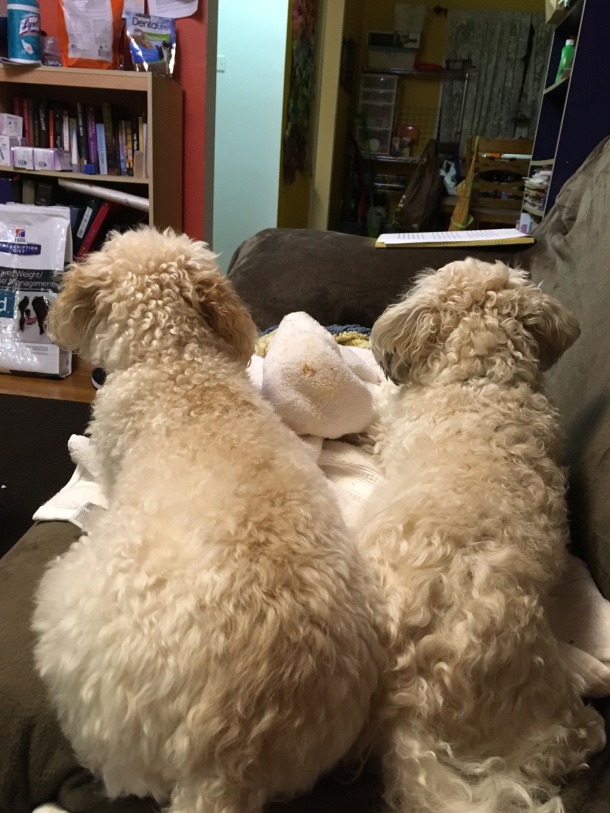 “She’ll be here any second.”

I want to thank everyone who wrote a review of Yeshiva Girl on Amazon, or read the book, or thought about reading the book, or told a friend about it, or encouraged me along the way. If you haven’t had a chance yet, please check out my Amazon page and consider ordering the Kindle or Paperback version (or both!) of Yeshiva Girl, and if you feel called to write a review of the book on Amazon, I’d be honored.

I am a fiction writer, a writing coach, and an obsessive chronicler of my dogs' lives.
View all posts by rachelmankowitz »
← Those Pesky Expectations
The Last Interfaith Bible Seminar, for the year →