Generally when I write in my blog, or anywhere else, I’m writing from the point of view of my most grown up, most presentable self, because that’s what people do. When I leave the house to interact with other people I generally dress up in a certain way and use certain words and facial expressions, and I pay close attention to how I present myself. Am I being nice enough? Mature enough? Responsible enough?

But when I’m at home, watching TV, doing puzzles, or playing with the dogs, other parts of me are allowed to surface and have their say. There’s a lot of arguing about food (Why can’t I have the whole container of ice cream right now?) and clothes (I want to wear pajamas all the time!) and entertainment (Cartoons! No, wait, mysteries! No, episodes of Law & Order on an endless loop!). Most of this doesn’t fit my image of who I’m supposed to be at my current age, and therefore I try to keep it at home where no one can see and judge. 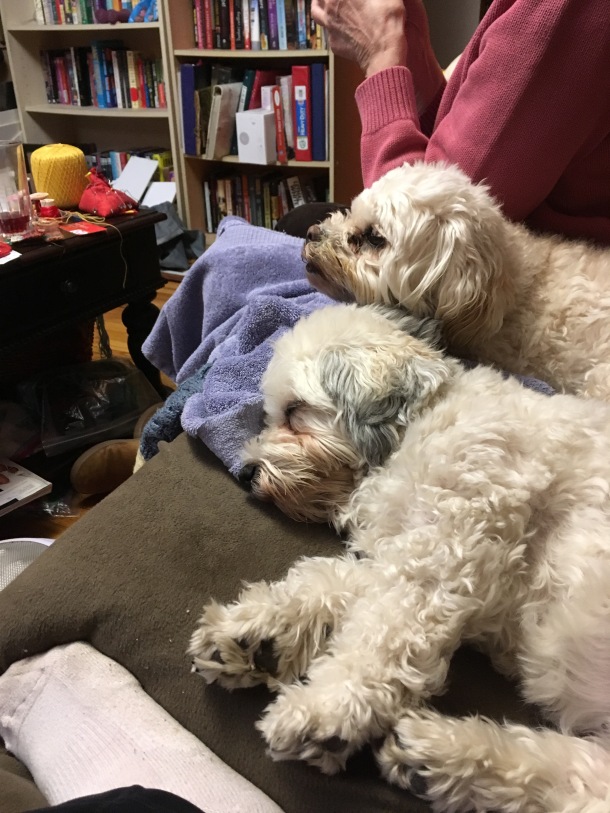 The girls don’t seem to care what we watch, as long as everyone’s together.

Or I bring it to therapy. Though it’s still hard for me to bring my whole self to therapy, even after twenty-five years. Generally, I report the hard stuff from my notes, or I keep it to myself.

Over winter break, I watched the HBO miniseries version of Phillip Pullman’s His Dark Materials, and it reminded me all over again of the thing I loved about the first book when I read it a few years ago (someone said to me, if you like Harry Potter, you’ll love this): each character, in this alternative universe, has an animal dæmon; not just an animal companion, but a part of their soul that exists outside of their body and takes an animal form. Up until puberty the dæmon is able to take many different forms (ferret, mouse, bird, turtle, cat, etc.), to meet many different needs, and then at puberty the dæmon takes the shape of one specific animal for the rest of the character’s life. That last part was the only thing that didn’t ring true for me when I read the first book. Only ONE animal companion? Only one aspect of the soul? Unlikely. My dæmon has never settled. My self has never come together into one definite and unchanging thing. I still flit and switch and change.

I would say that, for my most grown up self, the part of me that goes out into the world, my dæmon would be a Yellow Labrador Retriever – not quite as trusting and fluffy as a Golden Retriever, but playful and loyal and gentle, and smart, rather than clever.

My writing self is more like an eagle, soaring above it all and observing, feeling the wind in her feathers and finding her way; mostly isolated, but able to be part of a congregation, when necessary.

But the little ones, the ones who live in pajamas and think chocolate covered pretzels make a great breakfast, they’re different; both from the adult version of me and from each other. After watching the HBO miniseries, I tried to come up with a list of animal familiars, to help me recognize each internal child part more clearly, but that just set off a lot of internal noise and a sort of buzzing that sounded like a table saw, so I had to stop for a while and rest before trying again.

“It was so loud I could hear it too, Mommy.”

I think there must be a porcupine, and a fluffy brown rabbit, and a black Lab puppy, and a Starling or a Sparrow, and a bee (though nobody likes the bee).

I don’t have anything like a tiger or a bear or a lion in there, and I feel the lack of that protection.

This feels like a project I should take on: get out a huge animal encyclopedia and see which ones resonate with me and which ones don’t. I should draw pictures and write stories and figure out everyone’s favorite foods and colors and music. But just the thought of it exhausts me.

Like Walt Whitman said: “I am large, I contain multitudes.” I’m just too tired to count them right now.