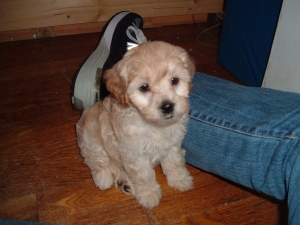 I wanted a dog who would like to snuggle. My previous dog was forty-five pounds and wiry and strong. Even in her dotage, she bit me if I tried to pick her up to take her outside. My idea of the perfect dog was a tiny Golden Retriever, a lap dog with a sunny personality who would lick my face and always love me. But I was afraid I’d be criticized by the big-dogs-are-the-only-real-dogs people. Like my brother.

But I needed a dog. I needed someone to hug, someone to drag me outside where other people actually exist. So I started to search the local pet stores.

First there was the Chic-a-lier, a mix of aChihuahuaand a Cavalier King Charles Spaniel. She was so tiny she fit in my palm, and so shaky that I felt an immediate kinship with her. We could sit in a corner and shake with fear, together. But I was afraid I would step on her. And I was afraid she came from a puppy mill where her tiny mother was left in a cage, with matted, shit covered hair, and distended teats and no chance to walk on solid ground. All the way home in the car, I was longing for that puppy and trying to be stern with myself. Do the research first. Find out what the health issues could be. Find a reputable breeder. But I could never find another Chic-a-lier.

When I finally decided on a Cockapoo, a Cocker Spaniel and Poodle mix, I wanted a ruby haired one – to get as close as possible to my ideal of a tiny Golden Retriever. And I wanted a breeder I could see in person.

Mom and I found an affordable breeder inNew Jersey, with a whole crowd of Cockapoo puppies in her basement. They were white with ruby markings. So, not exactly what I’d wanted, but more adorable than I could withstand. We sat down on the floor and the breeder handed me the one female puppy she had left and one of the boys too. Immediately, the boy ran after the girl and chewed on her back leg. She looked back at him, with a face that reminded me of me as a little girl, wondering why my brother would want to twist my arm off, and then she stretched out behind my back, as low as she could get, so her brother couldn’t see her.

I was afraid to leave her behind and take time to think about it in case someone else came by, or one of her brothers decided to attack again. And the breeder was circumspect about whether we would come back or not. She said something like, you’ll fall in love with another one, don’t worry. And that bothered me, because it isn’t really true for me. I have a hard time falling in love, and once I do, I have a much harder time falling out of it.

We stopped for donuts, for me, and coffee, for Mom, and tried to think clearly. We were both tired of the puppy search. And this puppy was cute. She would grow to be about fifteen pounds, the breeder had told us. And she wouldn’t shed. But most of all, she needed me. This little girl puppy needed a protector and I could be that for her.

When we returned, the puppies were piled up in their crates, napping. The breeder gave us a baby blanket from the communal crate, and a squeaky purple dinosaur to keep our new baby company, and then she picked up my little girl and kissed her goodbye and handed her to me. She told me to hold her against my body in the car for the long ride home.

When we reached the bridge back toNew York, Cricket, though she was still unnamed, relaxed in my arms and peed on her blanket, in my lap.

Who knew pee could feel so much like love?

I am a fiction writer, a writing coach, and an obsessive chronicler of my dogs' lives.
View all posts by rachelmankowitz »
Yoga →