Grooming Cricket means taking my life in my hands. She will bite the hand that feeds her if it also tries to remove the goop from her eyes. The breeder who raised Cricket from puppyhood told us that grooming would be no problem. Just buy a man’s electric shaver at the drug store and clip away. Then hold her feet and clip her nails with the special nail clipper. Easy peasy. She even demonstrated the nail clipping on eight week old, two pound Cricket and it was simple. For her. 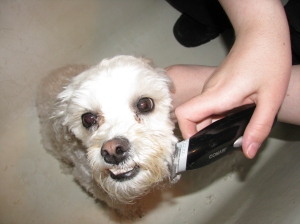 The first shaver we bought snagged on Cricket’s cottony hair and the motor heated up too quickly and the noise upset her. When I tried to clip her nails she bit me. We bought her a muzzle but she snapped it off her nose in triumph. 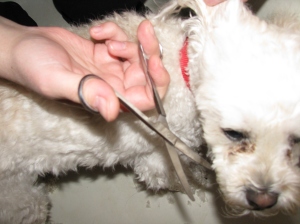 Are the scissors any better?

We took Cricket to a groomer after it became clear that I was not a master with the clippers and she looked like she’d been attacked with a weed whacker. Cricket was frightened as soon as we walked in. I think the other dogs must have been warning her off. She gripped my shoulder with her toenails and didn’t want to be handed off to the lady with the bad disposition behind the counter. I removed her collar and leash, and blushed when the groomer examined the horrible haircut.

I thought I’d feel better back in the car, but I didn’t. I wasn’t happy about leaving Cricket with that woman. Not just because she was a stranger but because if I’d had hair on my back it would all have been standing up.

I had the flutters, like an old fashioned English lady with bad nerves, and I couldn’t leave the apartment again to pick Cricket up two hours later. She came running up the stairs with Mom behind her, and I didn’t recognize my puppy. I sat down on the kitchen floor and held her wiggly body and cried. Blubbered. Threw a tantrum really, because I was afraid I could not love this poodle looking dog.

She looked like a stranger. And she smelled like one of those frou-frou poodles with the pompoms on their asses and she didn’t look like anyone I would know, or like. She didn’t understand why I was reacting so badly. She thought she was still the same dog and I was still the same Mommy and I should have been licking her the way she was licking me (though I’d told her repeatedly that I do not do such things).

My favorite version of Cricket’s haircut is when the hair on her body and face is pretty short, but her ears are long and swing out like wings, just like her Cocker Spaniel mommy. I don’t like when the groomers shave her nose, or leave it round and fluffy like a Bichon. And I don’t like when the hair on her body is long enough to get matted and hide debris in the layers. She doesn’t need a shelf of hair on her forehead or a pompom on her tail. She needs to be well trimmed in the hygienic areas so the poop won’t stick.

Cricket tried a lot of different groomers. There was the one who put purple bows in her hair and didn’t take the hair out of her ears or clean up the “hygienic areas,” and charged us extra because Cricket was so difficult.

Then there was the groomer who was also a vet tech, and managed to cut Cricket’s ear and had to do emergency care to stop the bleeding. Then she nicked her foot as well. We were given a credit for a free haircut with another groomer, but by then Cricket was even more reluctant. 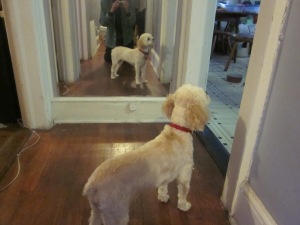 Cricket refuses to look in the mirror after her haircut.

Cricket is legitimately difficult. I’ve watched her at the vet when they try to give her a shot, or, god forbid, clip her nails. She has to be held by two people and she still wiggles and cries and shrieks like she’s being tortured. I don’t know why she’s like this. I’ve worked hard to counteract it. I tried reflexology on her feet to get her used to having her toes touched. And I worked on small grooming tasks at home, paying her for each snip of hair with chicken treats. But she still gets very frightened and very angry. I have to believe some of this is just genetic. But I keep worrying that it’s really all my fault. I didn’t raise her right.

This last time we got a groomer who knew when to push Cricket, and when not to push her. She was the perfect groomer, except that she shaped Cricket’s tail into a pompom, like tiny topiary. After a few weeks it was overgrown and matted, so I cut it off and she’s back to her stumpy-tailed look.

Now that Butterfly is here, I’m hoping that Cricket will learn some better manners. She was so jealous when Butterfly had her bath, that she offered herself up for the second shift in the tub. Peer pressure, you’ve gotta love it.

I am a fiction writer, a writing coach, and an obsessive chronicler of my dogs' lives.
View all posts by rachelmankowitz »
← Cricket and the Mailman
Cricket Loves Grandma →