Cricket and the Sticks

Cricket wants to dismantle small trees. After Hurricane Sandy, we had piles of branches everywhere on the lawn, and since the trees in our neighborhood are old and tall, the pieces that broke off were often the size of small trees themselves. And that’s what Cricket wanted to master. She wanted branches with tributaries, branches she could trip over as she dragged them by the heel across to her special chewing spot. She wanted to attack the branch that was five feet long and three inches thick. She put her whole body into it, using her paws and her mouth and all of her weight and all of her passionate intensity, her ribcage undulating with the effort. But she could barely drag the monster an inch, with all of that effort, and she couldn’t break herself off a memento to carry back to the porch. She had to settle for the two foot stick covered in grey bark that waited for her by the rim of the sleeping flower garden. It was a blow to her pride, but she got over it.

Sometimes she sneaks her sticks into the house.

When I have the energy, I throw the sticks for her in the front yard. I throw sticks one after the other to different parts of the lawn until she is out of breath from retrieving, and has given Butterfly a work out jumping over her leash to get out of the way. She especially likes to overcrowd her mouth with as many sticks as she can fit without gagging. And even then she gets mad if she can’t pick up just one more stick. She can do five, including one big one, if she’s feeling ambitious. It weighs her down so she can’t run the way she’d like to, but she still won’t give up a stick. It’s her trophy.

When she is exhausted, or her mouth is too full of sticks to take on anymore, she picks her favorite stick and goes to her own corner to chew.

Cricket holds a stick like a flute, as if she’s about to make music and blow into the mouth piece and play notes with her paws. She can be very delicate with it. She sits eagerly in the front corner of the yard, when she’s supposed to be focused on peeing, and she chews at her stick.

She seems to recognize different flavors of stick, like different wines and cheeses. She carefully sniffs for notes of moss and fungus, dirt and flowers, the pee of other animals, and the must of day old rain. 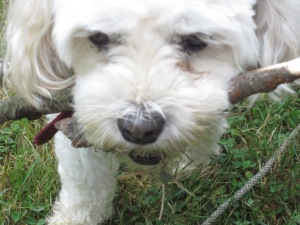 This one has notes of fungus, raspberries and lawn-aged pee.

For the first month or two, Butterfly had no interest in sticks. She tried to run after Cricket on the lawn, but she didn’t have the stamina, or the interest in chasing flying things. She finds running after squirrels equally inexplicable. She tried chewing on a stick or two, but it didn’t taste right to her and she gave up and came over to me for more scratchies.

But some time in the past month, she walked over to the corner of the lawn where Cricket usually chews her sticks, and she sat down, and started chewing on a very small stick. It was so tiny that Cricket wouldn’t even look at it twice, but Butterfly thought it was the perfect size.

Butterfly in the field of mini sticks.

She still doesn’t run after sticks, or leaves, or squirrels, but once she’s attached to her long lead, she’ll wander over to Cricket’s stash in the corner and see if anything looks tempting, and then she’ll start chewing. Or eating, rather. She’s a messy eater, so we now have a covering of bark pieces around the area when she’s done.

I wish I could see this as progress, but the fact is that they’re both supposed to be busy peeing, and I have to stand around and wait while they chew contentedly and ignore their bladders. God forbid I try to bring them back into the house before they’ve deigned to pee, they’ll both look at me like I’ve condemned them to the gulag.

When I have the energy, I’m better off taking the girls for a walk. Preferably some place where there are no sticks to be found.

I am a fiction writer, a writing coach, and an obsessive chronicler of my dogs' lives.
View all posts by rachelmankowitz »
← Cricket Loves the Snow
Nap Time For Puppies →