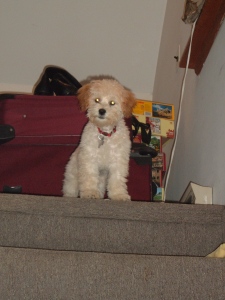 Baby Cricket, confused by the stairs

When Cricket was a tiny puppy, she had to learn how to climb the stairs. My bedroom is in the attic and Grandma’s room is one floor down, and baby Cricket just couldn’t decide where to spend her time. She would stand at the top or the bottom of the stairs longing to be wherever she wasn’t.

Her first attempts at climbing the stairs were harrowing. She managed to lift all four paws onto one step, and then the next, and the next, and then she looked down from the middle of the staircase and cried like a toddler at the top of a Ferris wheel. She was terrified, but she was also Cricket, which means relentless and determined. She willed herself up the stairs. 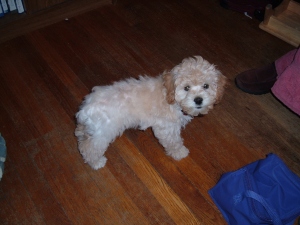 Baby Cricket, waiting to go up the stairs

I don’t remember how long it was before she developed a down-the-stairs strategy. Maybe we’d been watching skiing on TV, because she did the stairs like they were moguls, bumping her butt in the air with each jump.

Baby Cricket, exhausted from her travails

When Butterfly came home from the shelter in November, she had never used stairs before. She was scared to even climb up on the curb when we went out for a walk, let alone attempt the high hill of stairs up to our apartment. She worked on those curbs, seven times a day, until she was flying over them. But she needed some instruction with the stairs. I’d put her front paws on a step, then lift her midsection to show her how to make the next step. Up and up until she’d gone all the way up the stairs. We did this day after day until she started to place her paws all by herself. 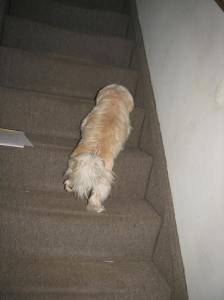 We assumed she would learn the down-the-stairs next, but nothing worked. I showed her a way to do the steps sideways, so she could fit her whole self on each step and not have to look down. But as soon as I let go, she would scramble back up to the top as if her paws were on fire.

We tried her on different types of steps, carpet and hard wood and concrete, higher rises and shorter rises, skinnier steps and wider steps. But nothing worked.

This hasn’t stopped her from climbing up every staircase she sees, though. There’s a never ending staircase at the local beach, and she tries to run up high and higher, without any thought of how she’s going to get back down. Some magic angel will make it happen, even if that angel is Mommy and groaning the whole way.

I had to put a pet gate in the doorway to my room, to stop her from running up there and barking to be brought back down, or worse, staying up there alone for hours. Before I had the bright idea to block my door-less doorway, I had to do a lot of puppy retrieval, climbing stairs endlessly to make sure she had access to food and water and a place to pee. But as soon as I move the pet gate, she comes running from wherever she is in the apartment, even if her head is buried in her food bowl, just to run up those stairs.

Cricket thinks this is hilarious.

I am a fiction writer, a writing coach, and an obsessive chronicler of my dogs' lives.
View all posts by rachelmankowitz »
← Dancing Puppies
The Red Dog →