The Pop Up Camper

We used to go camping when I was a kid, instead of flying to Europe, or wherever the upper middle class kids I grew up with tended to go. At first we had a tent, a big blue tent that could have held a dozen people, but then my father got a deal on a pop up camper and that became our home away from home.

We stayed at campgrounds, with hundreds of other tents and pop ups and Recreational Vehicles. I’m sure there are people who go camping with no water or electricity hookup, alone in the wilderness, but that was never the kind of camping we did.

Parking the camper in our designated camp site was the kind of torture I wouldn’t wish on anyone. First my father had to back the camper in, with Mom standing outside the car to direct him more to the left or right, so the camper wouldn’t hit a tree. Then the camper had to be stopped in place with wooden blocks, and the car detached from the hitch and parked at a distance. Then we had to make sure the camper was level, with jacks at each wheel well to make up for the varying levels of the ground underneath.

I remember my father screaming at my mother, “The level isn’t straight!” even though I could see the little bubble was right in the middle where it was supposed to be.

Then we had to pop up the camper and snap in the door and attach the water and electricity and lift out the two wings for beds.

By the time we were done all my brother and I wanted to do was go home, but instead we all went out for dinner and then stumbled back to the camper to go to sleep.

Mom says that Delilah, our dog, slept on the floor of the camper at night, but I’m not sure she’s right about that. There were three beds set up, one for me, one for my brother and one for my parents, and it seems strange that Delilah would have been inside the camper with us and yet not sleeping on my bed, where she often slept at home, at my feet. 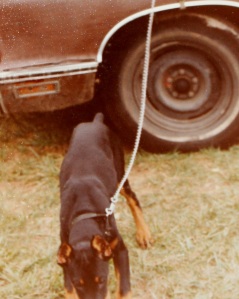 During the day, we hung a rope between two trees to attach Delilah’s leash to, so she could swoop along the length of that rope, with an extra six feet of leeway. She wasn’t much of a barker, but she looked intimidating to strangers, which was what my father was going for. She was a statuesque black and brown Doberman Pinscher, with the forced ears and snipped tail of a dog meant to fight. But she was a scaredy cat. If someone came to our house, she would bark, as required, but slowly back her way up the stairs and out of sight.

For the most part, there is a dog-shaped hole in my memories of camping.

I don’t think Delilah could have enjoyed camping. She was a home body by nature. She liked sleeping at the foot of my bed, exploring her backyard, and resting in a ray of sun for a nice long nap in the afternoon. She was also a fan of dinner time, when table scraps magically fell to the floor, where she was waiting. 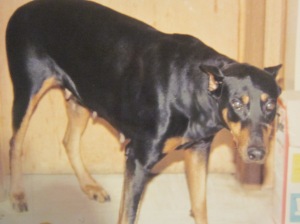 “I’d like my dinner, and a pillow, and a glass of Chardonay.”

She wasn’t used to being on a long lead, or even a leash for that matter, because we rarely took her for walks at home. We’d just let her out in the back yard, either in her private run, to poop and pee, or with us in the rest of the fenced in yard, to play.

Maybe Delilah came with us on the nature walks we took at the campground. Mom would take me and my brother out while our father grumbled to himself in the air conditioned camper. Sometimes we’d find wild strawberries or raspberries, sometimes we got lost in the woods, sometimes we saw mushrooms and met very old trees. The idea was to leave the people-world for a while and smell and hear and see different things. The air was cooler and the birds had more to say when they weren’t drowned out by the sounds of humans and cars.

“Time to smell the… leaves?” 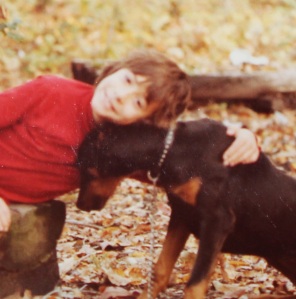 “My brother loves me, and he smells like peanut butter.”

The smells of the campground itself depended on the time of day. In the morning there was often the pervasive smell of bacon. In the heat of the day the air smelled of plastic, and freshly cut grass, and chlorine from the swimming pool nearby. Towards evening there were campfires, with baking potatoes and hot dogs and marshmallows on sticks.

I’ve tried to imagine taking Cricket and Butterfly camping. We could never use a tent, because no tent would hold Cricket. She’d be busting out of the sides and digging through the fabric of the tent to freedom (you should see what she’s done to my sheets). It would also be a good idea to have more sound baffling than a tent could provide.

I could also never leave them tied to a rope outdoors, the way we left Delilah. I would be very worried about someone coming by to steal my babies, or at least trying to steal them, and suing me when Cricket ripped off a few fingers during the attempt.

And I could never leave the girls alone in the camper. Butterfly would pee on the bed, and Cricket would scratch the door down, or chew through the canvas walls.

The girls wouldn’t mind a campfire, though. And bacon for breakfast would be their idea of heaven.

I wonder what Delilah would have thought of Cricket and Butterfly. I think she would have been protective of them, the way she was with her own puppies. Maybe she could have kept Cricket in line, with a look, or a growl, to get her to quiet down.

Cricket, in need of much training.

And she and Butterfly would have snuggled together for warmth, with Cricket harrumphing from a safe distance.

I could have found room for all three dogs on my bed in the camper, and maybe that’s what would have made me feel safe. I was usually so lonely on those trips, with no idea what to do on my own, and my brother only reluctantly spending time with me.

Maybe if I could fill all of the beds in the camper with dogs, instead of people…I’d be willing to go camping again. But probably not. 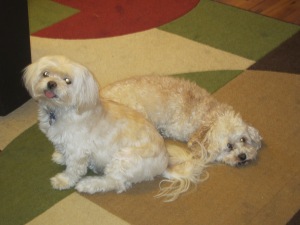 I am a fiction writer, a writing coach, and an obsessive chronicler of my dogs' lives.
View all posts by rachelmankowitz »
← The Sniffing Science
Bathmat Art →