RSS Feed
← Magical Thinking
To the Library we go →

The New Cat On The Block

The cat with no name. Yet.

I read recently that dogs have a hard time seeing things that are too still. They see objects better when the objects are in motion. 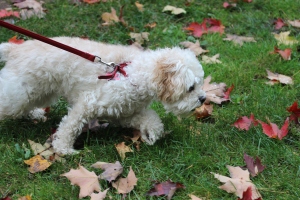 Cricket may be able to smell the cat…

but she can’t find it.

Eventually the cat hit his limit of watching and jumped down behind an evergreen bush. The dogs noticed him then, but it was too late, he’d already disappeared.

I saw the new cat a few more times in passing, literally, passing in front of our door on his way to somewhere else.

And then, one morning, he was sitting in the recess next to my front door, waiting by the window of one of the downstairs apartments. The girls didn’t notice him in his stillness and I could almost picture him putting a paw up to his lips, telling me to keep his secret.

I needed a picture of him, because writing a blog makes me think every experience needs pictorial evidence. So I took the girls up to the apartment and picked up my little red camera. I thought I was on a fool’s errand, but I went back outside and there he was, still sitting by the window.

I’m not going to say that he posed, but he tolerated me staring at him and clicking away. He seemed to have a particular boundary distance in mind, so as I got closer, he stepped further away. I took a dozen pictures at least, but eventually I got too close and he ran away. 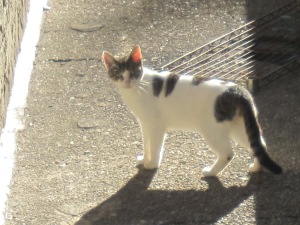 “You’re getting too close.” 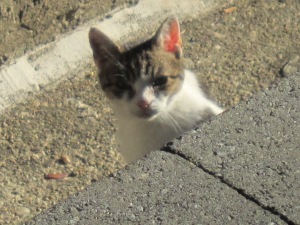 “Are you following me?”

He didn’t seem like one of the feral cats. He didn’t have their clever look, or their quick reflexes, and he really did seem small. And the window he’d been leaning against was the one Muchacho used to use as his entrance and exit. 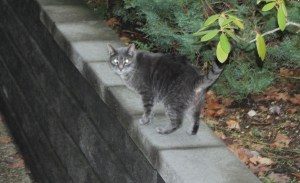 Muchacho, the big cat on campus, hadn’t been seen in months. He’d had a cancerous tumor removed last year, but he’d seemed to recover nicely. All of his fur grew back and he was his sweet, friendly, pee-all-over-the-yard self for a while. But then he was gone. 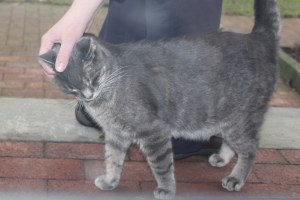 It’s possible that Muchacho died not long after I took his picture and wrote about him for the blog. He didn’t seem ill at all, though. I’d prefer to believe that he went to an old cats’ home or to stay with another relative. I almost wonder if he was saying goodbye that day when he let me pick him up and give him a hug, just for a moment, before realizing what he’d done and jumping out of my arms to freedom. 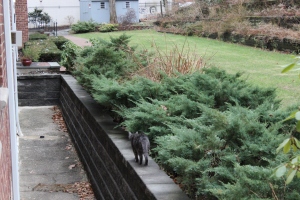 The last time I saw Muchacho.

The new cat must have smelled Muchacho’s lingering scent by the lower window and found it welcoming.

Something was drawing me to this new cat, and I felt disappointed when he wasn’t outside during the girls’ walks. There’s something magical about finding a cat hidden in the landscape, like a real live Where’s Waldo. But it’s more than that. Cats make eye contact in a very satisfying way. They stare and observe and notice me in a way people don’t. People are too busy walking by and thinking of other things, but cats notice me, at least until they decide that I’m crowding their space and run away.

It turns out that one of our neighbors has been feeding the new cat behind the tool shed and is contemplating calling the county to have him trapped and neutered, like the other feral cats. Meanwhile he’s been getting bigger all the time, and I’ve been wondering if he has a home somewhere nearby, and just comes over for the food, and to have his picture taken.

I am a fiction writer, a writing coach, and an obsessive chronicler of my dogs' lives.
View all posts by rachelmankowitz »
← Magical Thinking
To the Library we go →