The ground has been very icy lately. Even when the snow starts out powdery soft, we end up with ice rinks on the grass within a day, and the girls seem to enjoy it. I’ve always wanted to take them ice skating, but indoor rinks don’t seem to welcome dogs. 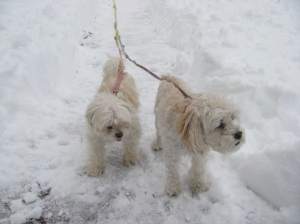 “This outdoor ice is too bumpy, Mommy.”

Cricket would be a terrible figure skater. She would be gripping the ice with her toe nails and hopping like a bunny rabbit, but maybe Butterfly would like the glide, just flying for a few seconds, and glorying in the curve.

Butterfly, dreaming about the glide.

I took skating lessons as a kid at the local rink. We were separated by levels – alpha, beta, gamma, delta – and given one rectangle of ice for our group lessons. We wore snowsuits and white skates and gloves and hats. We learned snowplow stops, two foot turns and bunny hops, falling and standing up. But the rink was so cold, and I was uninspired. I never saw skating as something I could get better at.

But that changed when I was seventeen. I had gone to college, and run home screaming, and needed something therapeutic to do while I went to therapy. One day, in desperation, Mom suggested going ice skating, and we went, and I never wanted to leave. I spent the whole two hour session, in terrible blue plastic rental skates, loving it.

I went three days a week, took group lessons and then individual lessons, got my own white skates, and started to improve. But really I loved just skating around the rink. I loved the whoosh of the air, and the speed, and I loved that feeling of attachment to the ice – like a trolley car must feel. With walking and running, your goal is to push off of the ground, to get away from it, but skating is all about the ice and the blade coming together. You fly best when you are attached to the ice (unless you’re a female pair’s skater, in which case, God help you).

Eventually I had to go back to school and be responsible, and I couldn’t figure out what place skating had in my life. But I was still obsessed with watching skating on TV. For a few years there, the televised skating world was filled with wonderful, creative, emotional performances. Torvill and Dean did a program called Encounter, or January Stars, and it was extraordinary. Everything they did was wonderful, but that one haunts me. Scott Hamilton makes me laugh, Kurt browning makes me want to skate or dance or just watch him on an endless loop. Katya Gordeeva, either back in her pair days with Sergei Grinkov or in the aftermath, is exquisite and soul deep. Michelle Kwan made me cry and made my heart beat in sync with hers. They all have this ability to be inside of the music, wearing it like clothes.

Katya and Sergei, way back when.

Mostly now we get repetitive Olympic eligible competitions, and packaged professional shows that all look the same, but every once in a while something wonderful happens: Meryl Davis blossoms into a beautiful and evocative ice dancer, Kurt Browning skates with his sons, Jeremy Abbot creates whole new styles of movement on the ice. Even if there are only one or two minutes of blissful skating in a whole two hour program, I can’t risk missing those two minutes.

I wish my girls could take figure skating lessons. I can picture them, bundled up in pink snowsuits, wearing four skates each, learning to glide and stop and turn, and hopefully not pee on the ice. Cricket would love to be able to jump, but she’d also be at risk for severely hurting herself, and others. Butterfly would follow her teacher and then sniff after the Zamboni as it cleaned the ice. 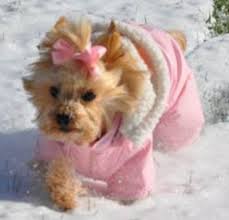 I found this picture of a dog in a snowsuit on line, because if I tried to do this to Cricket, I would be in the hospital. 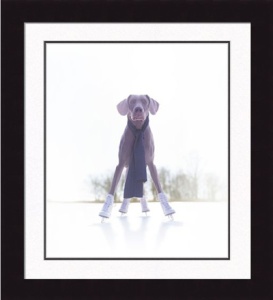 They’d probably have to have the ice to themselves, because putting up orange traffic cones wouldn’t really stop Cricket from busting out into the crowd and going in the wrong direction and kicking her blades around. Maybe she’d do better with hockey skates, because they don’t have a toe pick on the front. Figure skates are serious weapons. 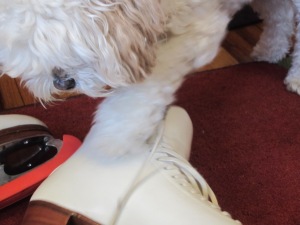 But, then, Cricket is pretty dangerous herself.

I am a fiction writer, a writing coach, and an obsessive chronicler of my dogs' lives.
View all posts by rachelmankowitz »
← Talking To Dogs
The Adult Bar and Bat Mitzvahs →