Miss Lichtman’s hair was dark blond and curly in a way that her wig would never be. She’d have to settle for a coarse, honey colored sheitel that fooled nobody, so for now, in her last days as a single woman, she was vain about her curls. I imagined her standing in front of the bathroom mirror in the Brooklyn apartment she shared with two other orthodox Jewish girls. She’d spend hours wrapping the curls around her ring finger, just to feel the hair as much as she could before she had to shave most of it off.

I envied those curls. My hair was stick straight, bangs rubbing between my eyelashes. I wanted to be thin like her too, no hips. Everyone liked her, even the cool girls, even the girls who were Born Frum, born into religious families, unlike me. Miss Lichtman played basketball with the senior girls and giggled with the sophomores after class. I was too young to giggle with her, at twelve.

She was twenty-four years old and had gone on too many shidduch dates before deciding on the right man to marry. How else explain being 24 – so old! – and unmarried and still teaching Jewish Law to teenage girls.

I sat in the back of her class and listened to the list of rules I was supposed to live by, the rules she seemed to take in stride as if it were not humiliating to have to shave your head and wear a wig, as if it were not intolerable that boys had to do no such thing. And then I was crying. I cried quite a lot at home, but usually not in school, and definitely not at my desk where people could see me.

But Miss Lichtman could see me. She stood in front of the blackboard in her modest blouse that covered her elbows and collarbone, and her knee length skirt that cinched at the waist, and she raised her eyebrows and finger waved me outside. I followed, with my head down, and leaned into the brick wall while she stared at me.

I probably told her that I was having trouble with my best friend, who wasn’t talking to me that week. I could have safely told her that I hated school, and didn’t fit in with the other girls, and didn’t like most of my teachers, except for her, of course, which would have made her roll her eyes. But I couldn’t tell her the truth. She stayed with me for most of her next class, offering me her phone number and asking if I’d like to visit her brother’s house for Shabbos. She knew something was wrong and she stared through the back of my throat as if she could see the words piling up there.

Butterfly has lots of words piled up in there too.

And then she cuffed my shoulder and told me to go back to class, and pushed her curious sophomores back into their classroom down the hall, and disappeared with them.

Our school provided a bus to take all of the interested girls to go to her wedding. It was awful to see my teacher all in white and looking terrified and not like herself. It wasn’t an arranged marriage or something she was being forced into, and most likely it was exactly the life she wanted for herself, but I was devastated. And then she disappeared altogether. From school. From New York. To Israel and her life and her husband and her own children.

Cricket has certain people who imprinted on her from her puppy year, especially a neighbor she hadn’t seen for years, who happened to be on the boardwalk at the beach one day. Cricket recognized her from thirty feet away and tried to break my hand pulling at the leash to get to her, long before I ever saw or recognized her in the distance, or remembered her name. 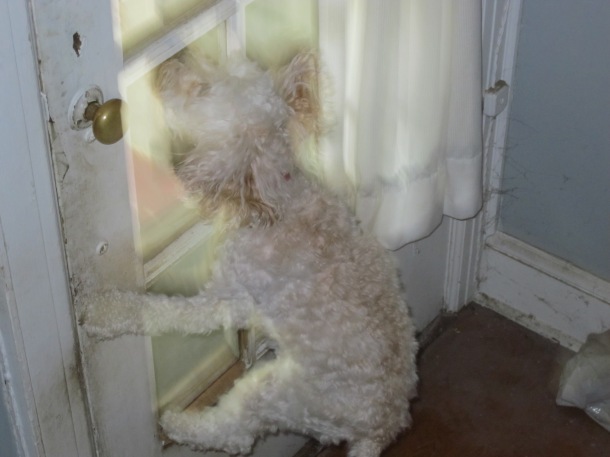 I took each of my teachers so personally that their limitations and flaws broke my heart, or enraged me, but even their smallest kindnesses stayed with me for years.

If I saw Miss Lichtman today, she’d be in her fifties, and wearing a wig, with who knows how many children, and maybe grandchildren too by now, but I’d still recognize her voice, or the rhythm of her speech, I think. I hope.

“Do you remember me?”

I am a fiction writer, a writing coach, and an obsessive chronicler of my dogs' lives.
View all posts by rachelmankowitz »
← Olive, the Morkie
Christmas Movies →