The Bird Came Back

Last Sunday, while I was answering heartfelt condolences on the death of Mom’s friend Olivia, and sharing the joy of a visit from a bird who seemed to be acting as Olivia’s familiar, the bird came back. This time she came into the apartment through the small opening next to the air-conditioner in the living room (where Mom leaves bird snacks year round, just in case). The bird visited the quilting closet again, of course, and the light fixture in the dining room, but then she became more bold and stood on the kitchen counter to eat pizza crumbs off of a plate, and walked on the living room rug, looking for any treats Cricket might have left behind (as if that would ever happen). 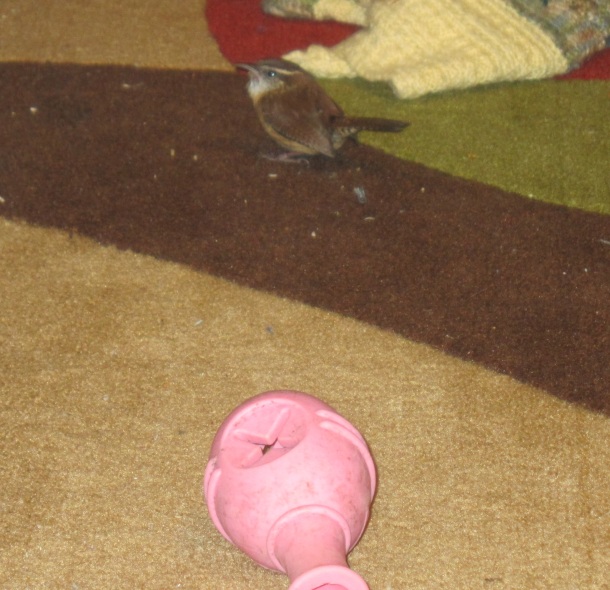 Cricket tolerated the invasion moderately well, until the bird stepped into Cricket’s food bowl to sample the kibble, and then wet her beak in Cricket’s water bowl. The bird even had the temerity to wander under Cricket’s couch! Cricket ran after the bird at that point, and was flummoxed by the whole flying thing.

“I must guard my couch from interlopers, Mommy.”

The bird landed on top of curtain rods and lamps, checked out cookbooks, and stood on my computer chair for a good long time, looking over at me with what looked suspiciously like Cricket’s side eye expression.

(This is my favorite picture – photographed by Mom and her magic camera.) 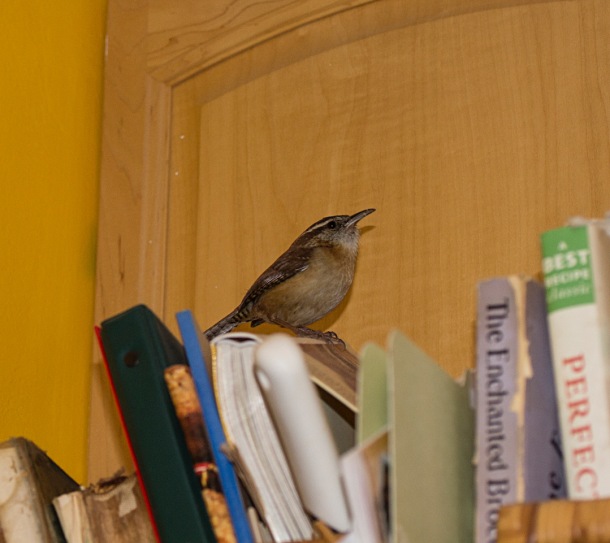 “These had better be vegan.” 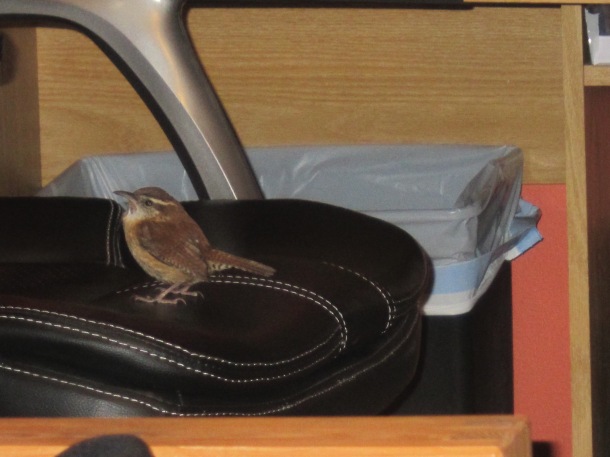 “This chair is just right.”

At bed time, instead of remaining in the living room, or the kitchen, the bird followed me and Cricket into my bedroom, investigating the tops of my bookcases, and the notebooks on my bedside table. She even followed Cricket into Mom’s room, and stood on the blanket, about a foot away from Cricket’s tail. We were starting to wonder if we had accidentally adopted a wild bird.

Mom did research on Carolina Wrens, through Google and bird-wise family and friends, and she found out that this is the time of year when they go house hunting, to decide where to nest in the spring. Of course, we started to worry about how much bird poop we’d be dealing with if the bird decided to bring her whole family to live in our apartment, but there was also something gratifying about even being considered for such an honor.

When Mom woke up in the middle of the night (she and Cricket are big fans of the late night snack), she was sure that the bird had left, but then she saw a pile of feathers on the radiator in the living room. She was afraid that the bird had died, but it turned out that this was just the bird’s sleeping pose, puffing her wings out to act as a blanket, and stuffing her head down to mute the outside noise.

By the next morning the bird was gone. We were able to clean up all of the lingering bird poop, which is surprisingly tenacious stuff, but there was also a sense of loss, and then hope, that maybe the bird will return again. Maybe this will become a weekly Sunday visit! Cricket would not be thrilled with a bird in the house on a regular basis, but, for me, it was nice to have another pet again. I think Miss Butterfly would have approved.

I am a fiction writer, a writing coach, and an obsessive chronicler of my dogs' lives.
View all posts by rachelmankowitz »
← Olivia
The Social Work Detective →