Finally, the Groomer is Essential

I was getting very jealous when I started to see other dogs on Facebook posting their after-grooming pictures last week, so we called our groomer, thinking she might have a recorded message letting us know when she might be back in business. Instead, she answered the phone and told us that she had received the okay from the local fire department to re-open, on a limited basis, and she could give us an appointment in a few days. I continued my constant watch on Cricket’s mats, and sneak attacks with the comb and scissors, until Grooming day finally arrived.

“I looked fine, Mommy. I liked the way none of the hair on my face could move in the wind.”

Ellie, on the other hand, was ready for a trim.

We handed the dogs off to the groomer in her parking lot – me on one side of the fence, wearing my red face mask and blue-alien-skin gloves, and the groomer on her side of the fence. The girls know the groomer well, so they were (mostly) okay about going with her. I, on the other hand, had to go home to a dog-less apartment. The echoing silence was so exhausting that I slept for most of the time they were gone.

The pick-up was basically the same in reverse, tossing the leashes over the fence in exchange for an envelope full of money. I was worried that we’d have to pay double for Cricket, given the state of her hair, but we paid the same price as usual. The girls jumped into the car as if they were fleeing the scene of a crime and then Cricket climbed onto my lap in the passenger seat, and then behind my neck, leaving a cloud of white hair in the air and all over my clothes. 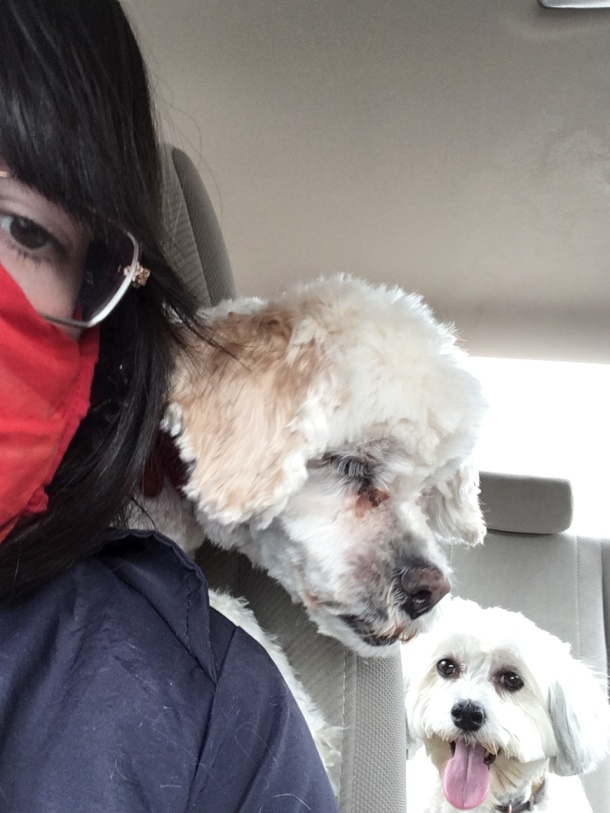 Poor little Cricket has had her worst fears realized. The groomer had to shave her really, really close to the skin; she’s not pink, but the film of white hair barely covers her nakedness. Miss Ellie, on the other hand, looks fine. I tried to explain the situation to Cricket – that because Ellie let me brush her hair and cut out her occasional mats, she didn’t have to be shaved down to the nubs. But Cricket couldn’t hear me. It’s possible that she still has hair in her ears, because only the vet has the courage to pull out that stubborn hair and risk murder and mayhem, but more likely Cricket just doesn’t want to hear what I have to say. She has very good selective hearing skills. She can even hear things that aren’t there. 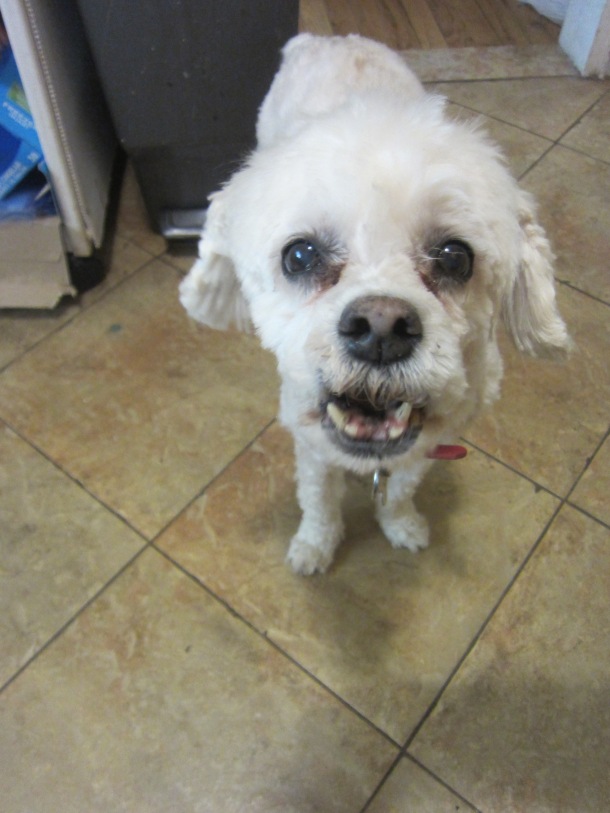 Both dogs were starving when they got home, as if they were trying to fill up the empty space where their hair used to be. But then they were exhausted and slept through most of the afternoon and evening, barely noticing my Zoom meetings and only waking up to beg for more food and walks. 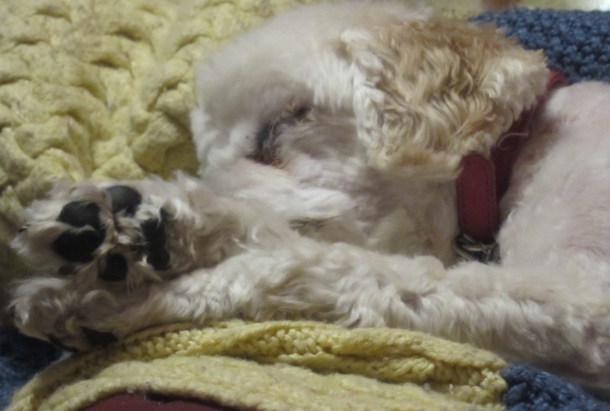 To cap off grooming day, we watched a segment of Stephen Colbert’s show where one of his producers let his ten year old son give him a haircut. First, the boy clipped off clumps of his father’s hair with what looked like kitchen shears, and then he moved on to the clippers. The Dad/producer ended up looking like a plucked chicken; kind of like Cricket, though she has slightly more hair left on her head than he did. Unfortunately, I can already see tiny mats trying to form in Cricket’s hair, so maybe she would have been better off if she’d been completely plucked.

I feel better now that Cricket doesn’t have any more mats on her face and belly, clumped with goop and food, breeding who knows what kinds of infections. Cricket, on the other hand, still believes that she was fine the way she was; and she’s sticking to it.