Cricket will turn thirteen later this summer, and I have been wondering how best to mark this monumental birthday. For humans of the Jewish persuasion, thirteen means it’s time for a Bar or Bat Mitzvah, to mark the onset of adolescence (Orthodox Jewish girls may have a Bat Mitzvah at age twelve instead). But, what about for a Jewish dog?

To be honest, thirteen seems too young for a transition into adulthood, at least for humans. A hundred years ago, kids might have left school at thirteen and gone out to work, but now that’s not even legal, and certainly not practical. But we’ve kept the Bar and Bat Mitzvah celebrations at the onset of puberty, or thereabouts, because…tradition. And because it would be impossible to convince kids to stay in Hebrew school for even more years before they can have their big party.

But dogs, even Jewish dogs, are a different story. If anything, the age of thirteen would mark old age, rather than the first steps into adulthood. And a lot of dogs don’t make it to thirteen, especially the larger breeds. I don’t understand how a religion that has rituals for almost everything, has missed the opportunity to designate lifecycle events for our pets, so I’m stuck with this somewhat inappropriate and misleading event that has come to be called, at least on social media, the Bark Mitzvah.

When we first brought Cricket home, twelve and three-quarter years ago, I looked up Cockapoos on an aging chart and it said she could live eighteen to twenty years. Dina, my Labrador mix, had lived a miraculous sixteen years, twice as long as the Doberman who had preceded her. But twenty? That’s more like a cat!

At almost thirteen, Cricket is showing signs of aging, with a little cloudiness in her eyes and a habit of hearing things that aren’t there, and a tiny bit of slowing down (though not much). But she has amassed an enormous amount of knowledge in her thirteen years, and many useful skills: she can beg, and guilt, and manipulate; she can bully and wheedle and whine; she can love and cuddle and sniff like a scientist; she could have been a gardener or an archeologist or a detective very easily, if we lived in a world that allowed dogs to go to school, and she has always been the de-facto Sherriff at our home. She has also been a surprisingly effective big sister, to Butterfly, and now to Ellie, who both needed mentoring in how to be dogs after growing up under less than ideal conditions as breeding mamas. Cricket has even learned how to offer comfort, rather than just to receive it, and can, on very rare occasions, even share food with her loved ones (though she would rather not).

There’s no escaping that thirteen is old age for a dog, but maybe that’s what we could celebrate with Cricket’s Bat Mitzvah. She has accomplished an enormous amount and now she is graduating into the last third of her life; finally becoming the wise old crone she has always wanted to be.

I don’t think Cricket is prepared for the rigors of a traditional Bat Mitzvah, though. She understands quite a few words in Hebrew, but she has trouble with articulation, and her sense of melody is iffy (though she is, at this very moment, singing the song of her people. I think I can make out the words “chicken” and “I want”). And, really, no one with any sense would ever let Cricket into the sanctuary or anywhere near a Sefer Torah (the holy scroll, kept in the sanctuary, that Bar and Bat Mitzvah kids dread having to read from at their services). But that actually works out well this year, since all of the Bar and Bat Mitzvah services at my synagogue are being streamed, while we can’t attend in person. Maybe Cricket’s Bat Mitzvah could be in our backyard, with the support of the big Paw Paw tree (also turning thirteen this year, coincidentally). They could have a service of their own, to mark their individual, and complex, journeys to their current stages of life. A very short service.

The fact is, Cricket could care less about having a Bat Mitzvah to celebrate her accomplishments, and her quirks, or to set a hopeful tone as she marches into her senior years. She just wants the food. So I will have to stock up on chicken treats and liver and all of the other good stuff she loves to eat. In moderation, of course, because I want her senior years to last a very long time.

Passover, or, Cricket is Happy and Free

George and Zoe went home on Tuesday, and they were thrilled to be back in their own apartment, with their Mommy. When Mom and I got back home, and Cricket realized that the other dogs were not with us (especially after the ceremonial refilling of her bowl with kibble), she did a happy dance around the apartment with her Platypus toy in her mouth. She pooped up a storm for the next two days, either because the return to her regular food made a really big difference, or because she was hoarding poop until her adversaries left, and she could finally relax. 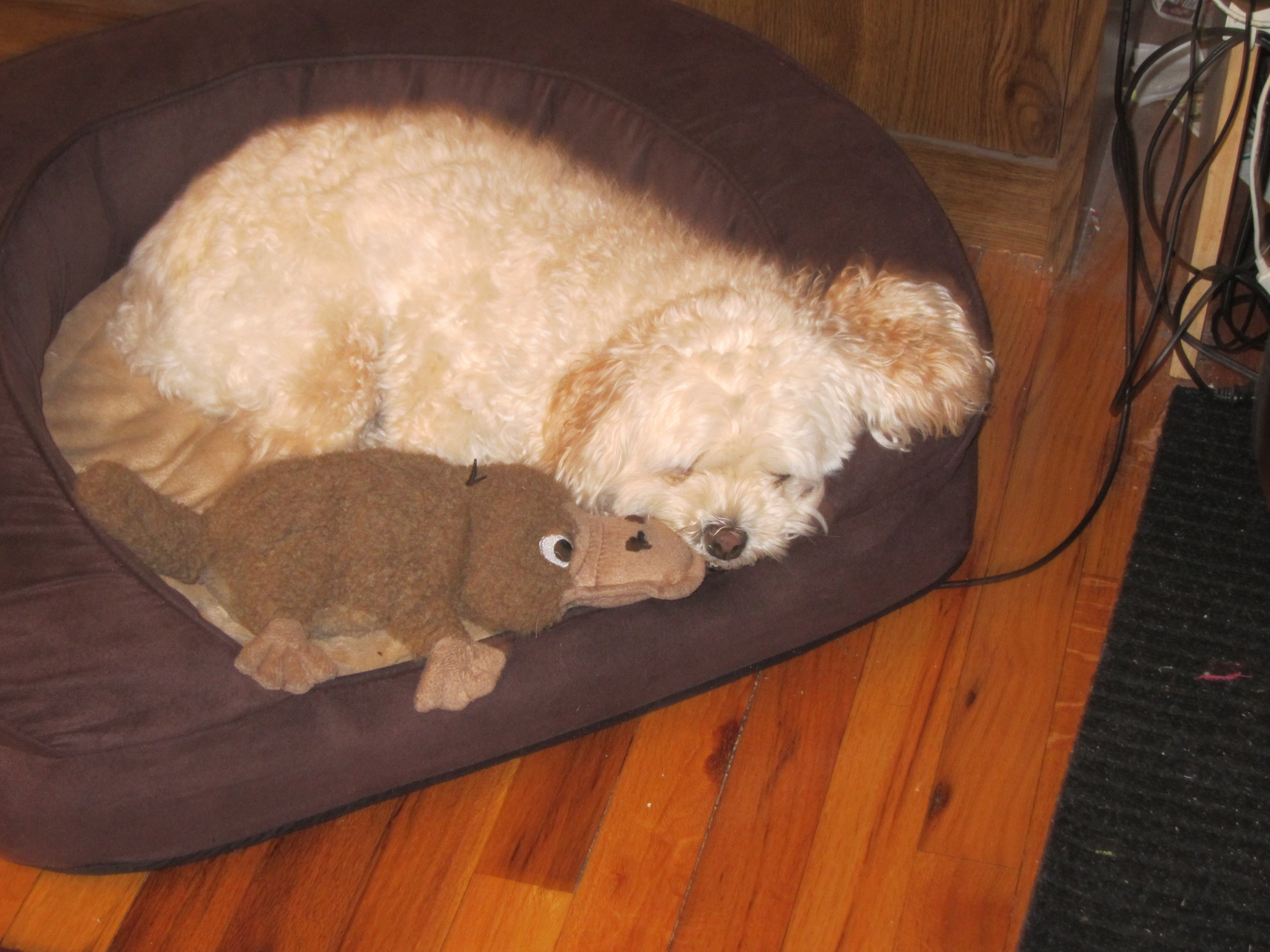 George had become more and more aggressive each day he stayed with us, trying to steal treats from Cricket, searching under her couch, and growling at her when she sat on Grandma’s lap and dared to act like the dog of the house. Even Zoe was starting to bark, though generally not at Cricket, more at the humans who kept forcing her to stick to her diet.

“This Grandma is mine.”

I had mixed feelings about bringing the dogs back to their own home, though, because I’d gotten attached, and because I worried that their Mom might not be up to taking care of them yet. But for Cricket’s sake, they needed to go home.

George and Zoe in a quiet moment.

Sometimes I feel like I’m drowning in all of my contradictory feelings; they seem to multiply over time, instead of streamlining the way I expect them to. For example, I have mixed feelings about Passover, and Jewish rituals in general. When I think of my Grandfather’s Seders, with the Maxwell House Hagaddah, and me, always the youngest, getting to sing the four questions, I feel like the holiday is warm and meaningful and full of light. But when I think of Passover at my own house growing up, I get tangled up in the family drama, and the weight of so many picayune rules.

The Seder is supposed to be about remembering the exodus from Egypt, and the struggle of going from slavery to freedom, and I think Cricket had her own Passover on Tuesday, when the other dogs left, and she’s still celebrating. But for myself, I think I’m still on the journey to freedom, still grieving Miss Butterfly, still working on graduate school, still not quite sure what the future will hold, or if I will be happy about it.

I’m not going to a Seder for Passover this year. I could have asked a family from my synagogue for an invitation, or looked for a big Seder at a Jewish Community Center or another synagogue, but I didn’t do that. It’s all of those mixed feelings making me unsure what I really want to do, and maybe I just wanted to pretend Passover wasn’t going to arrive at all this year.

I wish I could rely on rituals to help me pinpoint the stages of my life, and the next steps I need to take, but for some reason I’m not matching up with the signposts lately, and I feel a bit unmoored and unsecured.

But Cricket is feeling great, and that’s not a small thing.