The Pee and Poop Songs

I think it all started as lullabies when Cricket first came home in the car. She was two pounds of fluff on my lap in the back seat and I sang to her to help her calm down during the long drive from New Jersey to Long Island. I don’t remember what I sang, probably whatever was stuck in my head from the radio, or some Hebrew songs from school, and a lullaby or two. I was reduced to Twinkle Twinkle Little Star and Row Row Row Your Boat by the end.

But it worked. It helped Cricket relax onto my lap. And I tried it again whenever she seemed to get overwhelmed, in the crate, by noises in the house, or when she woke up at three AM to pee, or when she was trying to master the stairs.

So it was natural for me to sing to her when she was learning to pee outside. I would clap for her when she peed and I’d repeat the word “pee” so she’d pair the word with the action. And then I’d repeat myself, and add a melody to the whole thing. I never knew why certain songs jumped into my head and became pee and poop songs, though.

When I went to sleep-away camp as a kid they used to take popular songs and jingles and change the words. So I automatically started rewriting songs I knew, to fit Cricket’s needs.

There was a resurgence of pee and poop songs when Butterfly came home in November and needed encouragement to learn to pee outside instead of in the kitchen.

One of my favorites is the “I’m a Little Teapot” song, which transformed itself into: “I’m a little puppy, short and stout. Tip me over and poop comes out.”

“Baby it’s cold outside,” is a perennial favorite of mine, because it is a duet and I can imagine Cricket singing her part the way she cries and cuddles against me.

“I really must pee.” That’s her line.

“But baby it’s cold outside.” That’s mine.

“I’ve got to go pee!” More insistent this time.

“But baby it’s cold outside.” Me, still deluding myself that I have a choice.

We have this conversation daily and it’s nice to be able to put it to music, given that Cricket will inevitably win the argument and I will have to go outside and freeze my face off. I don’t even remember the original words anymore because the pee lyrics have become so prominent in my mind. I just see Cricket’s puppy dog eyes filled to the brim with unshed pee and the song pops into my head. 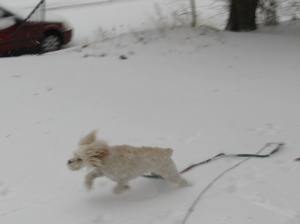 I’ve started dancing to the pee songs lately, to encourage Butterfly, especially after ten o’clock at night when the wind is howling and I need her to hurry up  so I can go back inside and not worry that she’s going to wake me up at four AM with desperate whimpers. I started out by walking in circles on the lawn, to mimic her pre-pee activities, but she’d get distracted by a noise down the block or by Cricket chewing her stick and she’d forget to pee or stop pooping in the middle. And then I started dancing, partly because it was so freakin’ cold out, but then I noticed that dancing got Butterfly’s attention better than just singing by itself. 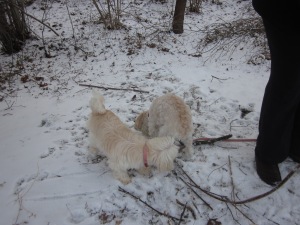 The girls inspire each other

The fact is, the songs work. At the very least, they make me feel like I can help my dogs live happier, healthier lives. And it’s fun for me. What more could I ask for?

I am a fiction writer, a writing coach, and an obsessive chronicler of my dogs' lives.
View all posts by rachelmankowitz »
← Bella, The flying Dog
Cricket Loves the Snow →