Over winter break, when the TV shows were all on hiatus and replaced with football and hallmark movies, I fell into a DVD palooza of Murdoch Mysteries. I’d seen the first season of the show on PBS a few years ago, but then it disappeared and I assumed the show had stopped being made. When I went to the library to find something, anything, to fill the empty TV space, I saw six seasons of Murdoch just sitting on the shelves. 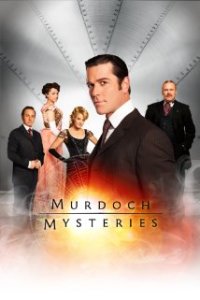 The show is Canadian and stars Yannick Bisson, who I recognized from a little movie I fell in love with as a teenager called “Hockey Night.” He was the classic long-lashed pretty teenage boy, and I was into that sort of thing.

Murdoch Mysteries is set in turn of the twentieth century Toronto. Murdoch is a catholic detective in a largely protestant town, but his real uniqueness is that he’s scientific and inventive in his detecting techniques. He comes up with all kinds of borderline-anachronistic devices to solve his cases.

His muse is the female coroner, one of the first generation of female doctors, and she is fascinated by his ideas and appreciative of his respect for her work. There’s a goofy constable, who proves himself to be kind and intelligent, despite some off the wall ideas, and a gruff inspector who recognizes Murdoch’s genius, and supports it, and only occasionally gets competitive and restless in his leadership role.

These are good people, nice people. They travel through different aspects of Toronto society and do CSI type stuff and meet important figures, like Alexander Graham Bell and Henry Ford and Arthur Conan Doyle and prime ministers and so on. There’s something chaste about the show, because of the Catholicism of Murdoch and the time period. Murdoch lives in a boarding house and rides a bicycle, despite being somewhere in his thirties.

The slow burn of the romance between the doctor and the detective, the chaste way they court each other, the family feeling among the police officers, and maybe the Canadian-ness of the show, all called out to me.

When I was three or four years old, I think, we took family camping trips to Prince Edward Island, in Canada. I remember the ferry across to the island, and I remember the cliffs, because my brother threatened to push me over the side, but more must have seeped in, because when I eventually watched the miniseries of Anne of Green Gables, set in Prince Edward Island, the place seemed very familiar. I could almost smell it.

I like binge watching TV shows. I did that long before the latest Netflix trend. I watched most of JAG and Buffy, the Vampire Slayer and Murder, She Wrote in two and three episode bursts, day after day, when they replayed on basic cable. It was such a relief to not have to wait for the next episode for a whole week. It allowed me to see patterns in the show, but more importantly, it let me bond with the characters more fully. It’s like when you talk to a friend for six hours at a shot instead of just a few minutes here and there. 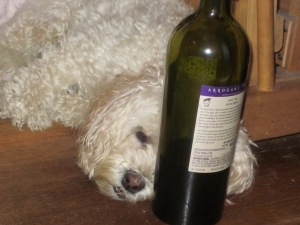 Cricket, during a long night.

The dogs seemed to like Murdoch too, though maybe not for the same reasons as I did. My dogs are happiest when we are all together in the living room and focused on one thing. They’re not huge fans of one human at each computer, or humans wandering from room to room, separately. They prefer to be stretched out on the floor with the comfort of knowing that no one is leaving the room and this is where we all belong.

I tend to prefer that too. 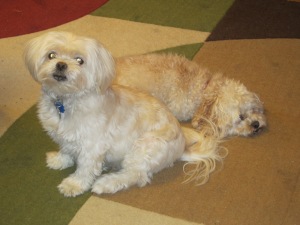 In the midst of the snow, and the freakishly cold weather, and holidays that we don’t celebrate, we created this oasis of friends on the TV to keep us company. The only important breaks, to the dogs, were pee breaks out into the cold, and snacks. Otherwise, we were all happily snuggled into the warm living room, with Murdoch and his mysteries. 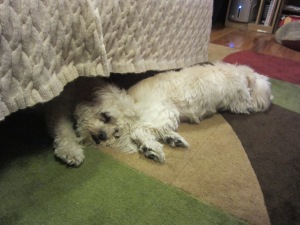 I am a fiction writer, a writing coach, and an obsessive chronicler of my dogs' lives.
View all posts by rachelmankowitz »
← Thunder Shirt
The Olympics, or Synchronized Peeing →