Cricket needs a job. She has a lot of excess energy, and uses it for barking and biting, and I’d like to find more constructive ways for her to keep busy. Some ideas that have come up in the past are:

·        Fitness trainer. She could help anyone build upper body strength and cardio, by pulling like an ox on her leash for three or four miles at a time. She might have a lot of one time customers, though, after an hour with her, I’m not sure we’d get follow up visits.

·        Assistant dishwasher at a restaurant, pre-cleaning the dishes. Except that any dangerous foods would have to be picked out before she got there, like onions and raisins and chocolate… 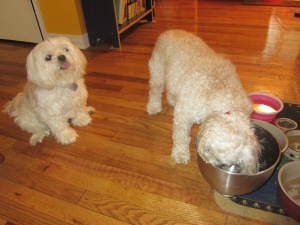 Cricket is an expert dishwasher. At least, Butterfly thinks so.

·        Ball puppy at a tennis court. Though I wonder if anyone would really want the ball back after she’d been carrying it in her mouth.

·        Carnival barker? I don’t think they really mean her sort of barking.

Nothing seemed quite right, and then I started thinking about my brother, the doctor. What if Cricket could do something in his field? I don’t actually believe she could go to medical school (anti-puppy prejudice!), but a hospital would be a fascinating place to work.

Children in the hospital can get very lonely, especially at night, when their visitors go home and the noise quiets down and they are supposed to be asleep. I know dogs have been invited in during the day, but I think they could be even more helpful at night. I can picture the puppies wearing blue scrubs, and beepers at her necks. Puppies could be called by the nurses when a child had a nightmare and couldn’t get back to sleep, or when parents had to leave at bedtime and knew that the child would be lonely.

The human handlers could bring the dogs in and leave a jar of treats by the child’s bedside table, with a bowl of water the dog could reach.

The job of the human handler would be to be as unobtrusive as possible, but also to know when a child and puppy combination would not be a good match. If the child was angry, at being in the hospital and poked and prodded, and lashed out at the dog, the human handler could remove the dog from harm and prevent the dog from needing to fight back.

The puppy-on-call room would have to have treadmills, and fake grass to pee on, and a water fountain to drink from, one for the big dogs and one for the little dogs. There could be a play circle filled with tennis balls and chew toys, and mats and beds to sleep on between jobs.

The dogs could do rounds earlier in the day, to meet the children currently in the hospital, and help the doctors with sniffing diagnostics, and then the dogs would be on call at night.

But now that I think of it, I’m not sure this would be a great job for Cricket. She’s a bit more of a me-me-me dog, rather than an aching-to-be-of-service-to-others dog. Now Butterfly, she’s a whole other story. But her scrubs would have to be a light pink. 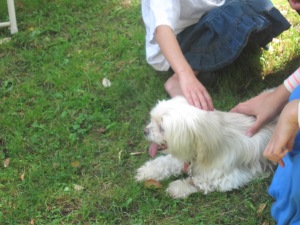 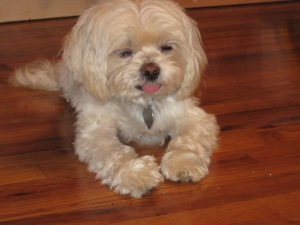 Maybe Cricket could work for the police? Drug sniffing? Recapturing escaped prisoners? She’d be great at catching anyone resembling a leaf or a stick. 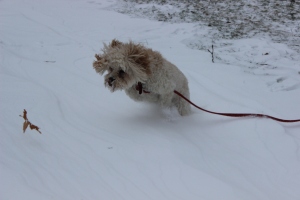 Cricket always gets her leaf!

I am a fiction writer, a writing coach, and an obsessive chronicler of my dogs' lives.
View all posts by rachelmankowitz »
← ESP in Dogs
Becoming Sisters →