I think the role of dogs in Passover has been woefully neglected. Cricket and Butterfly are my family, and they deserve a prominent role in such an important holiday, but I’m not sure what that role should be.

Butterfly and Cricket are ready for anything!

Leading up to Passover, there is an official search for leavened bread, or chametz, throughout the house, because you’re not supposed to eat, or even own, leavened bread for the weeklong holiday. When I was a kid, our dogs were very helpful with searching for old crackers under my brother’s bed, or half eaten candy bars in my book bag, or left over dog food in the corners of the kitchen. And then they would help with the ritual cleaning, done by candle light, where we would dump a handful of bread crumbs on the pristine floor and say a blessing as we swept it up, and the dog would lick the floor clean. 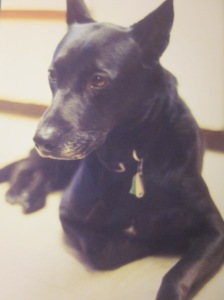 Samson, chewing on something more tasty, my brother

Delilah, intimidating the bread out of the house.

I may have to reinstitute this ritual, if only to clean up the kibble trail Butterfly has left throughout the apartment.

My favorite part of Passover is the Seder itself. All of the stories and songs make me feel like I’m living inside of a story book and travelling back in time. But the Seder is, first and foremost, all about the food.

When you think about it, the Seder is organized as a series of small plates. First you eat a piece of matzo, then a nibble of raw horse radish. Then you make a sandwich out of matzo and horseradish and sweet apple and nut charoset. It’s a tasting menu that gradually builds. And all the way through there’s the wine. This would be Cricket’s idea of a good time. She’s always been a fan of small plates, and wine.

Generally the next course at our house was a hard boiled egg, to represent life, with some salt water to represent the tears that are inevitable in life. Then gefilte fish, for sweetness, with some horseradish on top, to toughen you back up. Then matzoh ball soup with chicken and carrots and onions, just because. And then the rest of the meal came at once, with brisket or chicken or steak, a vegetable or two, some sweet potato tzimmes. And then for desert, a nondairy flourless chocolate cake, Ring Jells, and macaroons.

Every dog we ever had made it a habit to stretch out under the table during the meal, to catch anything that dropped.

We brought Cricket with us to my brother’s Passover Seder one year, before Butterfly arrived on the scene. Cricket was actually a good distraction for the kids, since we didn’t eat dinner until 10:30 at night. The kids were antsy and grumpy with the lateness of the hour, and it was a relief for them to sit under the table with Cricket, and murmur to her, and feel like she could understand them.

I think Cricket would have been very helpful with the search for the Afikomen, if she’d been invited to participate. There’s a custom to break the middle piece of matzoh and hide half of it somewhere in the house. The children search for it like a treasure hunt and get a reward if they find it. At my brother’s house it was an every-man-for-himself blood sport, but I would have loved if Cricket could have participated as part of a team, with some chopped liver smeared across the matzoh, so she could really use her skills to help her human cousins. She would have been especially happy to share in the reward, which, for her, would have been the chopped liver.

I’d really like for Butterfly to experience a Seder. It’s not that I believe she would understand the words, but the story is all about the escape from slavery to freedom: this year we are slaves in Egypt, but next year we will be free in Jerusalem. And Butterfly knows that story. She lived in a puppy mill for eight years, and now she is home, where she belongs. There should be songs for her to sing, to express the pain of her journey, and the happiness of the now. I’d like to sing those songs with her and celebrate that miracle. And maybe find some kosher for Passover chicken treats for her to eat between songs.

Butterfly has a lot to say!

I am a fiction writer, a writing coach, and an obsessive chronicler of my dogs' lives.
View all posts by rachelmankowitz »
← Candle Lighting
The Dancing Raccoon →