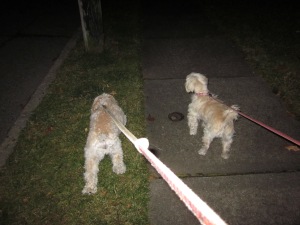 Out for a stroll.

The other night when Mom and I took the dogs out for their last walk of the night, I heard a terrible squawking sound. I couldn’t quite place it, but it was a mix of a little girl being tortured and birds flapping their wings and leaves rustling. I was concerned, but when I looked up into the woods I couldn’t see anything to explain the sound, and the lights from the complex illuminate the area well enough that a screaming child and her tormentor would have been visible. 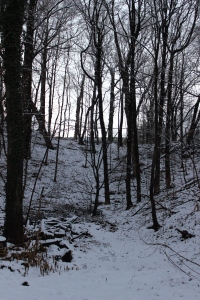 The scene of the crime (or, the backyard).

I thought it might be a cat fight or a strange bird ritual that I didn’t want to be a part of, so I turned the girls back towards home. The rustling sound came closer though, and, of course, I turned around to see what it was, and there was the dancing raccoon. He was skipping out of the woods like little red riding hood, without a care, until he saw the dogs. I don’t think of my dogs as especially frightening, especially when Cricket is keeping her barking to herself, but to this raccoon they must have looked terrifying, because first he froze in mid-hop, then he backed up on his tippy toes like a bad cat burglar, and then he turned and ran back into the woods. 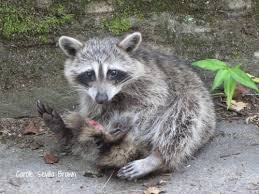 The raccoon looked something like this (not my picture).

I really wish I had a video of the dance. He was a bruiser of a raccoon, clearly eating a lot of the cat food left out for the now scrawny feral cats, but my little white fluff balls intimidated the poop out of him. 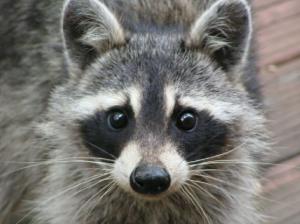 Who knew raccoons were so cute? (not my picture)

To be fair, it’s possible that he’d been spying on us for a while, for days or weeks or months, and had decided that the little white dog with the curly hair and the big mouth was clearly the devil in disguise. Cricket can really scream. I feel bad for the workmen who’ve been traipsing in and out of the complex for the past eight months, because Cricket barks at them every single time she sees them, and tries to break her leash and lunge at them from fifty feet away. Even Butterfly gets a few deep barks out before she calmly sniffs their pant legs. 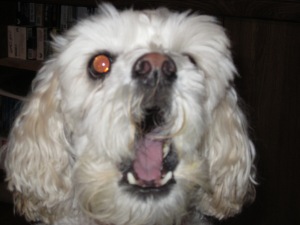 The big raccoon had probably written out a schedule of safe times to cross the yard to get to the garbage cans in front of the Seven-Eleven, and we ruined his plans by going out at an unexpected hour. He was making such a racket on his way down the hill that I guess he couldn’t hear us until he was just a few feet away.

This was my first raccoon sighting on the premises in a year. We have a lot of wildlife behind our building: we have chipmunks and squirrels and butterflies and snails, we have tiny birds and fly over geese and feral cats and home grown cats, and of course we have the dogs. But the raccoons have been keeping a low profile, and I’m afraid that this particular raccoon will do his best not to let himself be seen again, at least not by me and my scary, scary dogs. 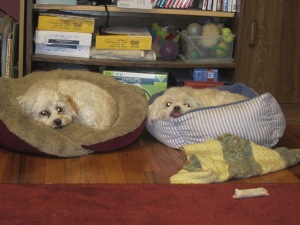 Who could be scared of these two?

I am a fiction writer, a writing coach, and an obsessive chronicler of my dogs' lives.
View all posts by rachelmankowitz »
← Passover for Dogs
Turtle Slow →