RSS Feed
← The Cuckoo Clock
How The Writing Workshop Turned Out →

Listening for the Worm

Two days before Mother’s Day, I went to a local garden with Mom where they were having a sale on their plants. The sun was too hot for me and the plants were strangers, so I sat on a bench by the pond, in the shade, while Mom gathered up her new friends. I’d been told that a turtle did a log rolling exhibition in the middle of the pond, when he felt like it, but at that moment he was just resting on the log, getting some sun, so I watched as a duck did a systematic search of the pond, spiraling out from the center, doing surface dives with his butt up in the air and his orange feet paddling furiously. He was looking under the water for something, but I couldn’t see what. Had he lost his keys? Finally, he got tired and went to the spot where the other ducks were resting in the tall grass. 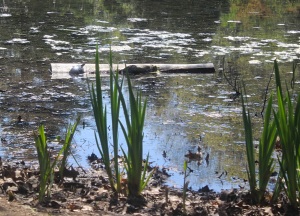 Can you see the turtle out there on the log?

That’s when I noticed a lone robin coming towards me. He was hopping, and looking around, and pausing, and pecking for seeds. I sat still on the wooden bench and watched him as he stepped closer and closer to me. He stared in my direction for a long moment, and then hopped and pecked, and came even closer. Is it possible to make eye contact with a bird? He seemed about to say Hello, when someone approached from the other side of the pond, and he startled and ran for the trees.

When I got home I noticed that there were quite a lot of birds standing on the grass in our yard, just staring into space. Most often they were robins, with their red breasts puffed up and beaks in the air. Mom said that the robins were listening to the underground noises that would tell them where to dig for worms, but I thought it looked like they were doing their daily meditation exercises, breathing in the smells of spring and exhaling the toxic cold of the winter.

Is he listening or meditating?

The way they leaned and tilted and turned their heads and stretched, it looked like they were doing a form of bird yoga. Mountain pose and Triangle pose were recognizable, but the most impressive pose was when they tilted forward with their weight cantilevered precariously over their tiny legs.

It always seemed to be one bird alone, with a wide expanse of lawn to search, instead of two birds, or a group, working together. Maybe listening for the worm is a lot like writing, you need to be alone to concentrate.

Butterfly, listening for the birds. 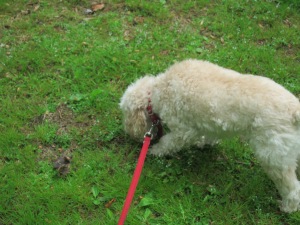 I’ve tried to convince the robins in the backyard that I am not a danger to them. I’ve told them the story of the robin at the pond who wanted to be my friend, but they are still circumspect, even though I am no danger to their food supply. I don’t eat worms, first of all, and I don’t have the patience to stand in one spot and wait for food to come. I prefer the short walk to the kitchen myself. But they insist on fluttering away when I get too close. Maybe if I just sit on the front step, and wait, one brave bird will consider looking my way.

I am a fiction writer, a writing coach, and an obsessive chronicler of my dogs' lives.
View all posts by rachelmankowitz »
← The Cuckoo Clock
How The Writing Workshop Turned Out →