RSS Feed
← Why Don’t Dogs Have Gynecologists?
Listening for the Worm →

When I was little, my brother and I slept over at Grandpa and Grandma’s house in Chappaqua. We stayed in the guestroom, with the two twin beds at perpendicular angles, and while we were there we were almost like friends. My brother is two years older than me and, at home, I was a bother and a nuisance, but at Grandpa’s house we were a team. He needed me as much as I needed him, because we were in a strange place and didn’t know what to do, though, of course, he still didn’t want to actually talk to me.

There was some vague sense that our presence was a problem for Grandma, and that we really shouldn’t be seen, or heard. There were glass figurines by the front door – which no one ever used – and I was not allowed to play with them, though there are pictures of me trying to touch them as a toddler. They had no children’s books that I remember, or toys. Grandma had tambourines and maracas and two strange little keyboard/recorder hybrids on top of the piano, and we were allowed to play with those, I think, but not for too long, and not if we gave her a headache. 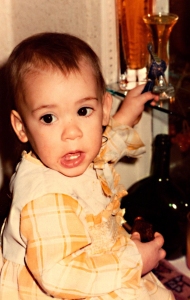 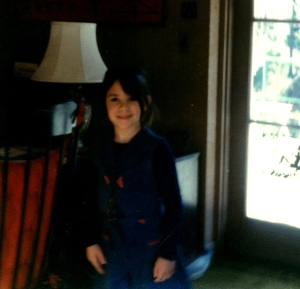 Me in the living room, looking for the light.

When we first arrived, we sat awkwardly in the big chairs at the dining room table and ate butter cookies from a blue tin, and listened to the chimes of the grandfather clock. I don’t remember Grandma talking to us much, except to say no, and don’t do that. She liked for us to sit quietly on the floor and look through old family photo albums with strangers in them who she never identified. For entertainment, we’d crack open nuts from the nut bowl, and that’s how I found out that I loved hazelnuts, and hated brazil nuts, and found walnuts incredibly frustrating to work with.

There was dust everywhere, hanging on the rays of sunshine coming through the windows. And there was a hidden attic, with stairs that had to be pulled down from the ceiling, and there was a laundry chute in the wall that sent the dirty clothes down a slide to the laundry room. We were not allowed to try the ride for ourselves; we asked.

Grandpa took me and my brother food shopping at the local Grand Union, after snacks, and educated us about the wonders of “Red Dot Specials,” and out-of-date bread, and slightly bruised fruit. He’d spent a lifetime teaching Consumer Education and he wanted to share it all with us. He’s probably the reason I’ve always loved supermarkets; he made them seem like magical places, full of everything we could ever need. 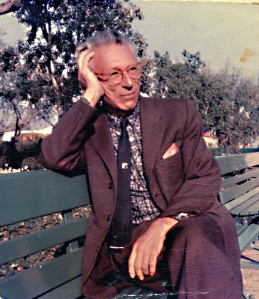 He drove us there in his white Mercedes convertible, so that we could feel what it was like to drive with the top down, but I think he also took us out to give Grandma a break from having children in her house.

When we came back, we put the groceries away and then went down to the garage. The house sat on a big piece of property, mostly taken up by a pond. Grandpa had rowboat and life vests and oars hung up in the garage, as if it were a boat house, which it sort of was, and he’d take the row boat out on the pond as often as possible. I’m not really sure what he did out there, because I refused to get in the boat. The water in the pond was an opaque green and I was certain that there were evil creatures skittering around in there. I expected the Loch Ness monster to jump up and roar at any moment. I was even afraid to walk across the little wooden bridge to sit on the bench by the water to wait for Grandpa and my brother to come back, because I expected eels to fly up and grab my legs. I preferred to stand in the driveway, or over by the little stream, where the monsters couldn’t get me.

Late at night, they took us out for ice cream (maybe at eight PM, but it felt like midnight to me) and we ate ice cream sundaes, and brought home candy necklaces, and candy dots, and red licorice strings, and my brother even shared some of his with me, because I ate faster than he did, and because he was better at saving some for later.

At night, though, the house was too quiet. They didn’t have a dog anymore. I would hear about Rufus, the small, shaggy dog my grandmother used to dote on, but by the time I was born there was no sign of a dog in their house, no toe nails clicking on the hardwood floors. 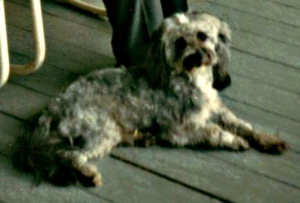 But, there was the cuckoo clock in the guest room. It was so loud! Every hour, it seemed, the little bird would pop out of the front door of the clock and make noise, and it felt like the whole clock was giggling and shaking. I could hear the tick tick of the cuckoo clock all night. It was wonderful! I looked forward to visits from that cuckoo, like a long lost friend, checking to make sure I was alright. I always wanted to bring the cuckoo clock home with me, but everyone said no. 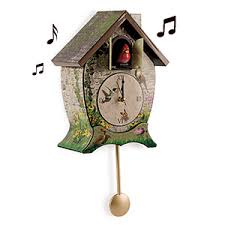 A Cuckoo Clock (not mine).

When the dogs wake me up now, at way-too-early in the morning, they remind me of that cuckoo clock. They have the same persistence as the cuckoo, the same cacophony of noise, and the same visible shaking from making all of that noise, as if any second their pieces are going to pop out from excitement. Their little tails wag like metronomes and remind me of the pendulum swinging side to side at the bottom of the clock. And I feel that same sense of relief I felt when the cuckoo came to visit. I’m not alone! Someone else is here, and talking to me. Hello! 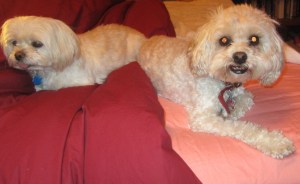 I am a fiction writer, a writing coach, and an obsessive chronicler of my dogs' lives.
View all posts by rachelmankowitz »
← Why Don’t Dogs Have Gynecologists?
Listening for the Worm →