My therapist says that I keep putting one foot in front of the other, no matter what, and she gives me an A for effort. She expects it of me, and she’s proud of me for it, but also disappointed, because my efforts never really seem to pay off. Most of the time I feel like Sisyphus, who was punished by the gods and forced to roll a boulder up a hill, only to watch it roll back down, again and again for eternity. Sisyphus did the task each day. He didn’t just sit at the bottom of the hill and take a nap. But why not?

My dogs don’t mind pushing the same rock up the same hill every day, in fact, they seem to find new excitement in each trip outside, each stop at each leaf, each squirrel sighting. Cricket can put the same level of oomph into fighting me for extra treats every single day. 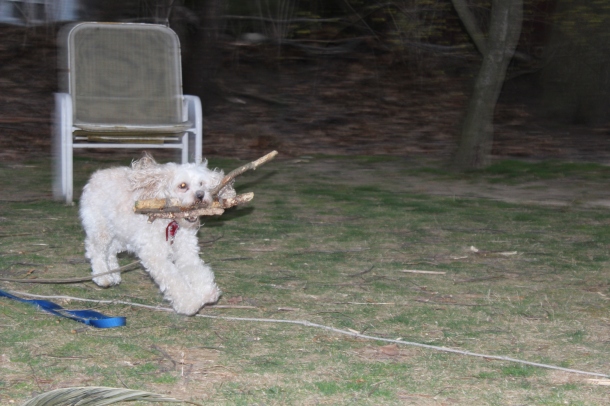 Cricket has a very big mouth.

The thing is, the dogs don’t mind the repetition in their lives because their needs are met. Their rituals work for them and are productive and satisfying. Mine don’t work for me. I keep submitting queries to agents, and stories to magazines, and getting nowhere, and I feel like I deserve this, because I haven’t paid off my debt to the universe yet. I just don’t know how I managed to build up such a huge debt.

One of the boulders I push up the hill every day is pure physical pain. Well, pure is a misnomer, because there is always the underlying belief that I cause the pain myself, with my very powerful mind. I am not always in pain, or at least not always in a lot of pain. Some days I’m just aware of something in the background, a niggling doubt that I can really carry that laundry bag, or walk to the car, or dry my hair, without having to take a nap afterward. Do I go out to do the food shopping, or do I take the girls for a walk around the neighborhood? Because I can’t do both in the same day. Some weeks, I can’t do both in the same week. By the end of food shopping, sometimes I can’t stand up straight and my neck and shoulders and back feel like they’ve been hit with hammers.

If I take the dogs out walking long enough to wear Cricket out, I will come home feeling like the world is tilting and a fiery cleaver is embedded in my lower back. And this is something I actually want to do! Forget about the laundry, which I never want to do, or washing dishes, which is truly heinous, and can put me out of commission within five minutes. Why must sinks be so short?!

“How about we just sit here?”

In our society we believe that people get the lives they deserve. If you are successful, it’s because you earned it. If you are a failure, well, you must not have tried very hard. Sisyphus had no choice about his life-long task, and in a way, that’s how I feel too. I have been sentenced to this fate because I can’t breathe without writing. I don’t believe it has been pre-determined by God or by an external authority, but it is so hard-wired into my nervous system that I can’t choose something else.

Do I have the option of attempting more accomplishable tasks? Yes. I take on other tasks all the time that are easier to complete. Maybe Sisyphus did this too. Maybe he learned a language, or listened to books on tape, or the equivalent, as he pushed the boulder up the hill. Maybe he didn’t even see his task as meaningless because the effort itself was satisfying. I don’t know.

Cricket doesn’t need to catch the squirrel in order to find the chase satisfying. She has never actually caught a squirrel, and it doesn’t seem to dim her excitement for the task. I wish I could be more like her. Maybe she understands that even if she caught the squirrel and lived out her dreams, she would still need to get up the next morning and eat and play and chase again in order to feel alive. Getting that boulder to the top of the hill wouldn’t really change anything. 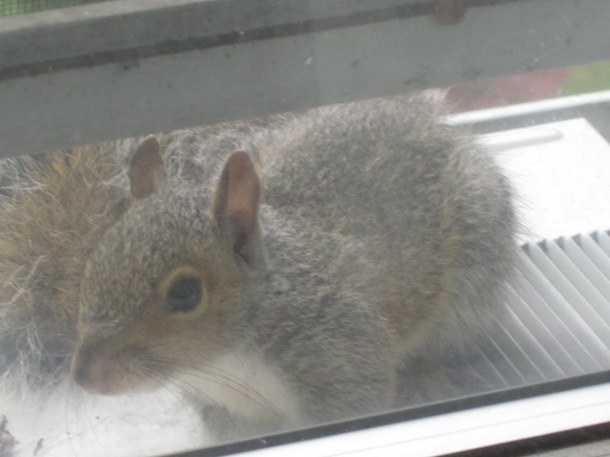 I am a fiction writer, a writing coach, and an obsessive chronicler of my dogs' lives.
View all posts by rachelmankowitz »
← Star Wars, Again
Butterfly Almost Gave Grandma a Heart Attack →