RSS Feed
← The End of the First Year
Talking in Circles →

Butterfly started coughing about a month ago. It was only on occasion and seemed to be in response to her rawhide chews, so I stopped giving both dogs those treats. But the coughing continued; it was a sort of hacking sound, like there was something stuck in her throat and she was trying to cough it up. 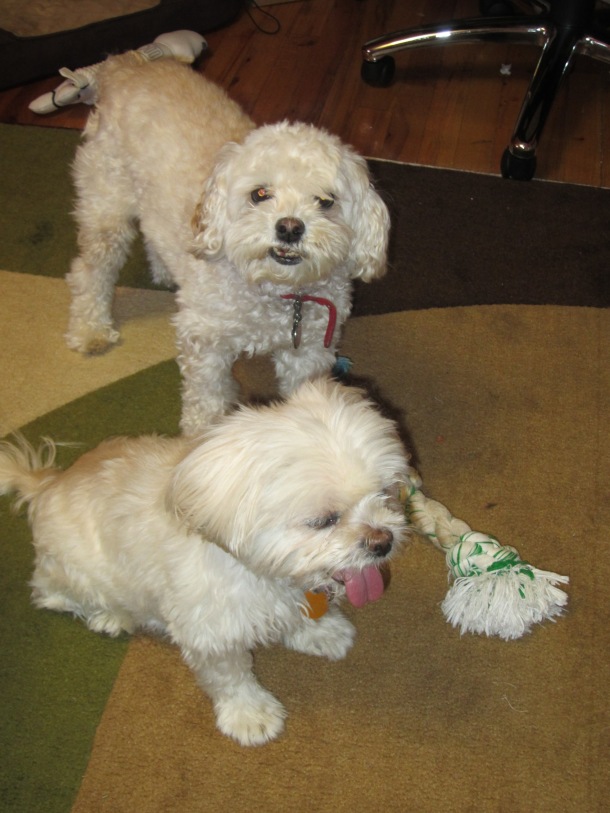 I was concerned because it was the one question her cardiologist always asked me when he gave me the results of her twice yearly echocardiograms: has she been coughing? Even if her heart looked the same since her previous visit, he asked about coughing, and I always said no, she wasn’t coughing much. She’d sneeze here and there, or cough when she tried to swallow too much kibble at once, but, no, coughing was not one of her things. He never really explained why he was asking, and after the first three times I stopped asking him.

So when I noticed that she was coughing almost daily, I got scared, and made her an appointment with her regular vet. I thought it could just be allergies, and that I was getting hysterical for no reason, but really, I was afraid her heart disease had progressed.

I’ve worried about losing Butterfly since the first day we brought her home, because not only was she already eight-years-old, but she had a heart murmur they’d just noticed when we adopted her. They hadn’t heard it when they were removing her bad teeth, or excising a lump under her armpit. If they’d noticed the heart murmur, the staff said, she wouldn’t have been out on the floor and up for adoption – she’d have been in a special foster program for heart patients. So I was very lucky that they hadn’t noticed.

Butterfly’s vet did a chest x-ray that showed no changes to her heart to go along with the coughing, but she said she wanted to try Butterfly on a heart medication anyway, to increase blood flow, and see if that would help. She said that the coughing could be caused by her enlarged heart pressing on her trachea, making it more difficult for her to swallow. But that was just a guess, really. Possible side effects of her new medication would be lowering of blood sugar and listlessness, but I already do blood sugar tests for her diabetes, so it wouldn’t be an extra burden.

We have to go back to the vet and see what she says about the heart medication and the coughing. Maybe we’ll have to try a different kind of medication. Maybe she’ll tell us to redo the echocardiogram before the six month mark to make sure it really is her heart that’s causing the cough. But I’m worried. Butterfly came home as an eight-year-old puppy mill survivor, with a questionable heart, and then developed diabetes within her first year with us, so there’s always been a ticking clock over her head. I make sure to revel in her presence as much as I can and make sure that I don’t miss anything of the life she has left – but I still worry every day, and I picture my life without her as a barren wasteland. I need Butterfly to live to her full expected life span of twelve to fourteen years, but more would be better. She’s at eleven and a half now. 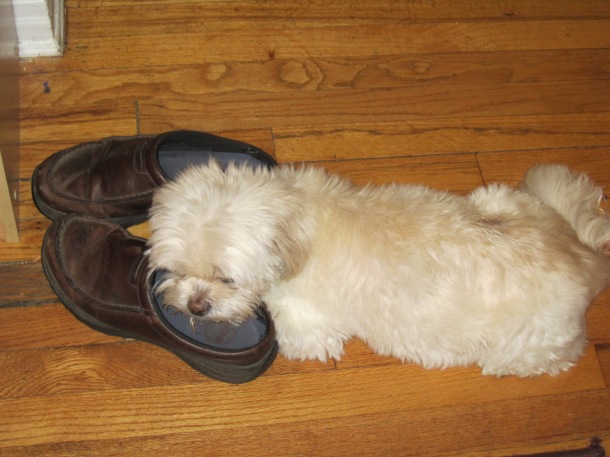 I’d like to find out that the coughing is something unrelated to her heart, like, maybe she’s trying to learn how to talk and this is the first step, or she’s decided to store kibble in her throat for later, and it’s more difficult than she expected, or maybe it’s just allergies. That would be wonderful.

I am a fiction writer, a writing coach, and an obsessive chronicler of my dogs' lives.
View all posts by rachelmankowitz »
← The End of the First Year
Talking in Circles →