The End of the First Year

I finished my first year of graduate school in social work, but I still feel anxious, as if there’s some assignment I forgot to do. I did not get all A’s this year, for the first time in forever, and that’s been hard to accept. I did all of the assigned work, and more, but there was some essential disjunct between the work required of me and the way my mind works. I just felt at odds with it all year, but not in a self-righteous or confident way, more like, every once in a while they started speaking in a language I couldn’t understand, and I felt like a moron.

It’s not just a question of jargon, where, once I learned what they meant by certain words, I could catch up. It was something in the way they wanted me to think that just didn’t click for me, and I’m scared that this gulf will remain throughout the next two and a half years of school, and then out into the professional world, and I will never feel quite right in this profession.

I don’t know if the dogs noticed that I was in school this year, because most of the work was done online. They can’t tell the difference between schoolwork and the writing I actually want to do. Or if they can, they haven’t told me. The real difficulty, for them, will come in August when I start going to my internship two or three days a week, and I’m not home for their midday walk. Hopefully, Grandma will be home for lunch and they will not notice the difference, but naptime may be delayed and that will, of course, be horrifying. 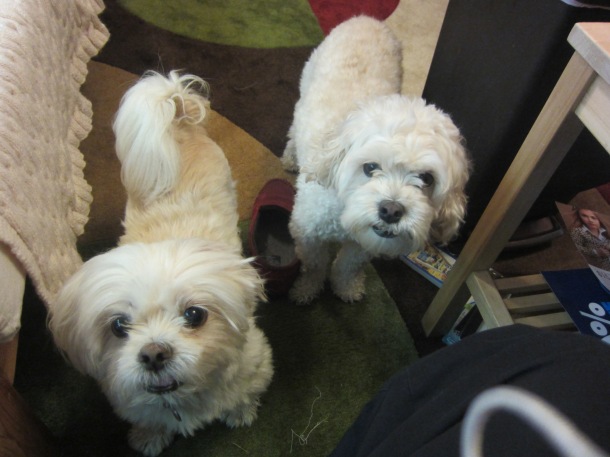 Now that I’m free to return to my own writing for the summer, though, it feels like I’m jumping off a cliff. Fiction is unfamiliar terrain again, after being immersed in academic writing all year. I’ve heard people call it code switching, when you talk (or write) differently depending on your audience, but I don’t transition easily, and part of me is afraid that if I let myself fall back into fiction this summer, I’ll have to relearn a whole year’s worth of tropes when school starts again in August.

It doesn’t help that I’ve been collecting so many rejections for my writing over the past few years. The rejections, and the reality they laid bare, that my writing could not be relied on as my career, is what led me to social work school in the first place. But being in school feels like I’m validating those rejections, and saying that I never was that good to begin with. And I’m afraid that if I write something I’m proud of, I’ll want to send it out, to literary magazines and agents, and it will be the same horror all over again. I hate that the publishing industry has gotten me so defeated that I’m afraid to write any more novels. I’m angry that I can’t see a way forward, and to protect myself I seem to have shut myself down.

I’ve been working on blog posts, of course, and articles for my synagogue newsletter, which have given me an opportunity to practice my interviewing and research skills, and to get to know people better and offer something to my community. But I want to write novels. I want to be a writer, not a social worker, not a reporter, not a do-gooder. I want to tell MY stories. The gulf, between my social worker self and my writer self, is getting wider instead of smaller, and my resentment at becoming a social worker is growing.

I need to find a way to survive the process of becoming a social worker, because I really do want to help people; I want to hear their stories and find ways to relieve their anxiety and confusion, at least a little bit. I want being a social worker to develop into something (almost) as satisfying as being a dog mom. I mean, sure, I get annoyed when the girls wake me up early from a nap, or bark incessantly and refuse to tell me why, but mostly I feel shaped and calmed by taking care of them. It’s a set of rituals and a relationship that I rarely take for granted, and I rely on them heavily for my sense of self, and structure, and love.

The oxytocin rush alone is staggering.

I am a fiction writer, a writing coach, and an obsessive chronicler of my dogs' lives.
View all posts by rachelmankowitz »
← Thin Skin
Butterfly’s Heart →