I went to a conference on Dementia recently, for social work school, and one of the exercises they did was to have everyone try to come up with their own list of songs. The theory of the Music and Memory project is that hearing the music she loves will wake a patient up from her dementia, at least for a moment, and allow her to feel like herself again.

I tried to make my list, but it was much more difficult than I’d expected. How can I know ahead of time which songs I’ll still want to hear? Music has such power over me: it can agitate me, and exacerbate the darkness; it can remind me of great joy, but also of alienation.

I started to think, though, how helpful it would be, when first meeting a new person, to get to listen to their playlist. If their playlist is monotonously the same, or chaotic, with no rhyme or reason going from song to song, or just out of sync with me, then that would be helpful to know ahead of time.

I wonder if Cricket and Butterfly have music in their heads all day, the way I do. Do they wake up to a persistent melody running on a loop? Or for them is it a smellody? A complex mix of dirt and bird poop and air freshener, wafting through their minds all day long. 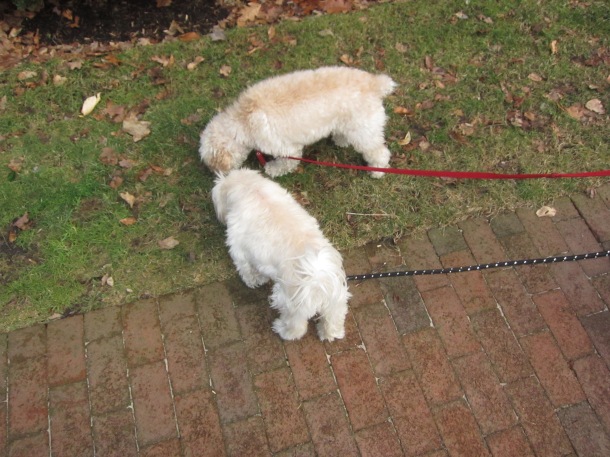 I thought I heard some of Cricket’s internal music the other night, during one of our evening walks. It sounded like “Pee in the wind,” a variation on “Dust in the wind,” but full of the high lonesome sound of a pee message blowing away before she could fully sniff its contents.

I’m pretty sure the music playing in Butterfly’s head, when it’s time for her morning treat, is “The chicken dance,” that frantic, ever faster, song that we had to flap our elbows to in elementary school. But the rest of the time, I can see Butterfly as a jazz baby, swinging her pearls, and dancing at a speakeasy. It’s not that I think she’d be a profligate drinker, it’s that she’s got such swing! She moves like she’s hearing the Benny Goodman big band in her head; not the complicated Jazz that you listen to for the esoteric-ness of it, but easy, breezy, swing band jazz that makes you snap your fingers and dance. 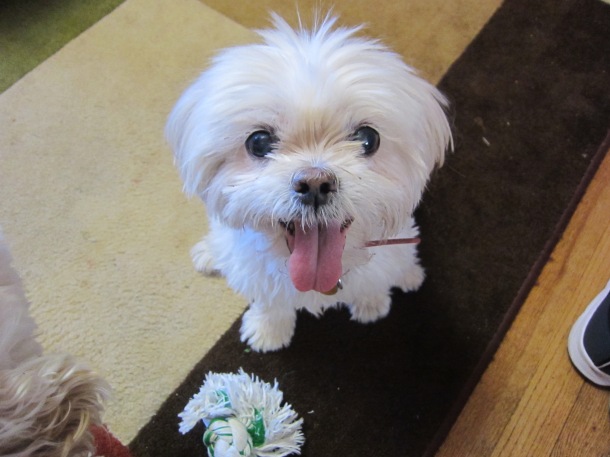 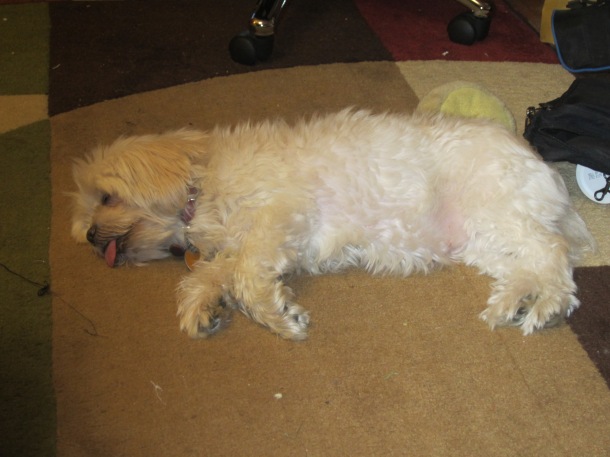 Butterfly even dances in her sleep!

Cricket makes me think of Beethoven; that’s the level of drama she lives by. And Barbra Streisand. If Cricket were human she’d sound like Barbra Streisand, with that dramatic range, nasal twang, and constant crescendos and decrescendos, like an Escher staircase going up and down simultaneously.

But I struggle when I try to imagine the soundtrack for my own life. I’d want lots of Louis Armstrong and Frank Sinatra and Nat King Cole. Some Beatles, and a little Elvis. Martina McBride and Fiona Apple. Aretha Franklin and Etta James and Otis Reading and Barbra Streisand. James Taylor, of course. Salt N’ Pepa could be helpful too. And Yo Yo Ma’s Appalachian Waltz CD, with Allison Krauss on vocals.

I’m not sure how all of that would end up on one soundtrack, but I guess it could. There’s a female cantor in NYC who has a beautiful voice, and I’d love to have her version of Kol Nidre when the time comes. And there are a bunch of songs from sleep away camp that I would love to hear again, preferably in the off key, off rhythm versions in which I first heard them.

One of my favorite ways to choose music used to be to buy movie and TV show soundtracks, because the songs were always chosen for maximum impact, and made every emotion crystal clear. The Star Wars soundtracks were such a relief in that way, spelling everything out for me. Wouldn’t it be helpful if the Darth Vader theme played in the background when you met that seemingly nice guy at a party? Or the Jaws theme, before a particularly unfortunate job interview? Even if I didn’t take the hint beforehand, it would be so validating, in the disastrous aftermath, to at least know that the musicians saw things the same way I did.

I’m a little bit worried that Cricket has been hearing the Darth Vader theme in her head for most of her life: when the mail man comes by, or leaves fly past her head, or dogs bark. Maybe I should play It’s a Wonderful World on a loop, while she’s sleeping, to see if that could change things for her.

I am a fiction writer, a writing coach, and an obsessive chronicler of my dogs' lives.
View all posts by rachelmankowitz »
← Cricket’s New Year’s Demands
The Plant Cozy →