I’m taking a break from writing my monthly column for my synagogue newsletter, mostly because the newsletter is being discontinued. I was given the option of continuing the column as a monthly email blast, but I turned it down, for now, because school is kicking my butt extra hard this year. 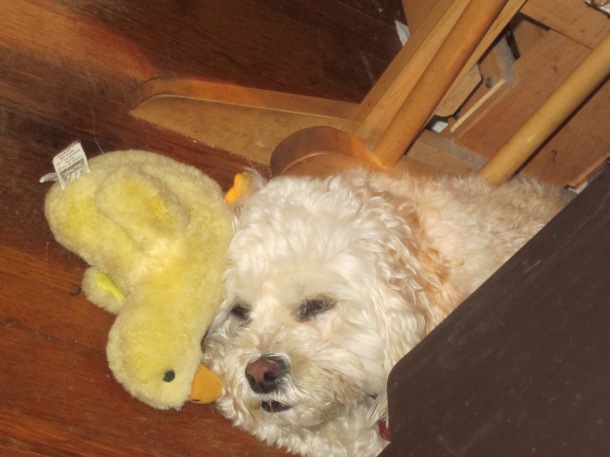 I could use a duckie to nap with too, right about now.

What I loved about writing the articles was the feeling that I was doing something meaningful for my community, not just for my own ego (though that too). I felt like I was picking up loose threads from the community, and weaving them into the whole, to make a stronger fabric.

My biggest regret is that I wanted to do more interviews with the seniors at the synagogue. There’s a whole generation of ninety, and near-ninety year olds, with stories to tell. Stories about coming to the United States when their families escaped from Nazi Germany, or fighting in World War II, or meeting their spouses (of more than sixty years now), or marching and protesting and taking political action to change the world.

Cricket is an awesome protester!

It’s amazing to me that I have gotten to the point where I’m not terrified of doing interviews anymore. I’m a little anxious, it’s true, but I’m even more compelled by the lives people have managed to live, and any clue they can give me on how to live my own life better. I want to know these people, and I especially want to understand the work it takes to build a community out of such different people. Relationships between individuals are hard enough to create and sustain, but communities? They are complex beings that can die so easily.

There’s a concern among older Jews, and maybe older people of other religions as well, that young people don’t want to belong to religious communities anymore. That, even if they believe in God, or engage in religious behavior, the synagogue itself is not where they want to be. But I have a different take on it. I think young people want the chance to create their own communities, the same way previous generations were able to do. They want the chance to reconstruct the world in their own ways, which is what every generation hopes to do. And if they can hear the stories of their parents and grandparents and great grandparents, they can learn how previous generations went about making their own choices, and where they may have struggled or succeeded along the way. Then the next generation can take the communities we already have and re-imagine them instead of needing to start from scratch.

At least, that’s how I feel about it. I see ways that my community brings me comfort and knowledge and connection, but also ways that it doesn’t quite include me, or reach me, as I am. And my job, in the articles I’ve been writing, and may have to start writing again next year, is to teach people how to expand their view to include me and the rest of the people who have felt left out until now.

Like Cricket. Just watching services on the computer is not enough. At the very least, she’d like to have a private meeting with the rabbi to discuss her concerns. And if he just happened to have a bag of chicken treats at the ready, that would work too.

I am a fiction writer, a writing coach, and an obsessive chronicler of my dogs' lives.
View all posts by rachelmankowitz »
← After Teddy
Thanksgiving with Teddy →