Self Pity, And The Benefits Thereof

We say that someone is “indulging” in self-pity, as if self-pity is as luxurious as a spa day, or a bowl of ice cream, which it just isn’t. People get stuck in self-pity the way you get stuck in a bear trap. It’s not fun. And it’s not a choice. Something in the brain mechanism gets clogged, and a stage that is supposed to be transitory and enlightening, bogs down.

My sense, with most people, is that the degree of stuckedness is directly related to the amount of noise in their head telling them that they are not allowed to feel self-pity. It’s the conflict between the pain, and the resistance to feeling and expressing the pain, that gets us stuck. If you give yourself permission to acknowledge the hurt you feel, then you can begin to take good care of yourself, and place the blame where it belongs, and unravel the knots, and learn the hidden lessons in the experience, and get to a new place.

Dogs don’t judge themselves this way. They don’t beat themselves up for feeling what they feel. I think that’s a big part of why we love them, because they make us think it might be okay to have emotions and show them openly. Even when they emote vociferously, dogs actually move through an emotion more quickly than we do. They get over things much faster, because they don’t put it on a shelf for later, they feel it, and process it in the moment, and then they are done and move on to the next thing. Usually food.

Cricket is not shy about expressing herself.

The benefit of dogs over children as teachers of this skill is that dogs don’t learn hopelessness as quickly as children do. They don’t take the hint. They keep barking. They keep licking themselves. They keep peeing on the carpet if we forget to take them outside. Children learn what we want from them too quickly. They see our disapproval and they adapt. The worst thing you can ever see is a baby who has learned not to cry. It’s not a sign that she is a “good baby” it’s a sign that she is shutting down.

Children automatically cry and scream and act out when they are in pain – physically or emotionally – and this alerts the adults around them that help is needed. This is how it is supposed to be. It is only when the adults in charge tell you to shut up that you learn not to send out the alarm.

As adults, we do our best to make our emotions manageable, often by cutting them off and shutting them away, and when someone else dares to emote in front of us, we get mad. Impatient. Enraged. How dare you make me feel that?!

When Cricket is mad, she barks, or grumps under the couch. When Butterfly is lonely, she pines. And they don’t feel bad about it. They don’t snap out of it just because I tell them to be happy. They get there when they are good and ready, or when it’s time for a W-A-L-K.

And lets Cricket know too.

The especially nice thing about my dogs is that when I am all wrapped up in self-pity, they don’t yell at me to stop, or try to distract me, they come over to snuggle next to me and give me kisses. They know that feeling sad is part of life, and that, at some point, the sadness will pass. And when that happens, they will be perfectly situated to remind me about that W-A-L-K.

The Puppy Kiss of Life 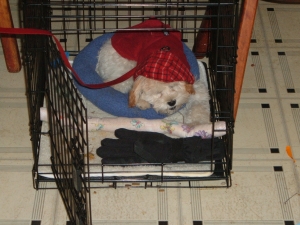 Before Butterfly came home, the closest thing Cricket had to a sister was her human cousin, Tamar. Cricket and her cousin were a lot alike, with their long skinny legs, mischievous eyes, and tendency to scream, very very loud.

Tamar was two and a half years old when Cricket arrived and she wasn’t sure about those teeth, and the fast paw movements, and the way Cricket could jump up on a couch or a bed and seemingly appear out of nowhere. And Cricket was too enthusiastic. Too bossy. 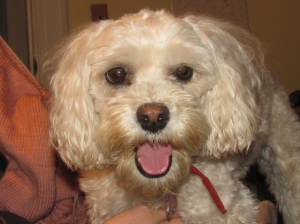 Tamar ran into her brothers’ room and grabbed onto me for dear life when Cricket followed her down the hall. I was reading to the boys, five and eight at the time, and Tamar zoomed in and climbed on my lap and curled into a ball, genuinely afraid. Cricket tried to come over and make friends, but with her pink tongue hanging out, her intentions were misconstrued.

Have tongue will travel

By the next visit, Tamar had a pink toy gun and was fascinated with shooting at people. Her brothers were fixated on computer games with serious firepower, and so was her father (my brother), and therefore, so was she. And being her aunt, I was a prime target. She loved the shooting, but even more than that she loved to do her own death scenes, falling dramatically to the floor after a drunken stumble down the hallway. Cricket was off playing with the boys at first, but when she heard the loud thump of a body hitting the floor, she ran down the hallway to help. Tamar scrambled to her feet and raised the pink water gun and screamed, “fweeze puppy!” in a very serious voice. 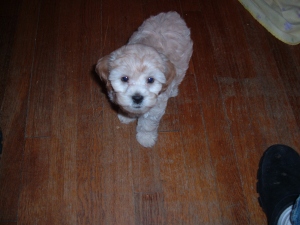 “Why is the door closed?”

Cricket didn’t follow orders. She ran towards her human cousin with her tongue hanging out, intent on licking the pain away. My niece ran into her bedroom and slammed the door.

It didn’t take long for isolation to get boring, though, and the gun slinger came out of her room and tracked me down again. I was in the kitchen, baking cupcakes with the boys, and, in order to save time, and eggs, I gave in; I did a long, slow death scene at the kitchen counter and fell to the floor. But when I tried to get up, Tamar laughed and shook her head and said, “No, you can’t move. You’re dead.” I thought for a second, and then called for Cricket to give me the Puppy Kiss of Life, to bring me back from the brink, so I could finish making the cupcakes.

Cricket rushed over to lick my face and I surged back to life.

My niece loved it. She insisted on replays, with various family members nearing death, and Cricket rushing in to save them.

When it was my oldest nephew’s turn, he did a very convincing imitation of death, after a very convincing shoot out with his younger bother. He was sprawled on the floor, limp and seemingly dead, and his little sister was horrified. She called for Cricket to hurry, “You gotta save BB!” Cricket obliged with the puppy kiss of life and my nephew rose from the dead with a flourish. Tamar jumped up and down and screamed, “I saved BB! I saved BB!”

She was so proud.

After that, she held Cricket’s leash and called her “my puppy” for the rest of the visit. She still demands Cricket’s leash, while her younger brother hogs Butterfly, but she doesn’t love it when Cricket tries to lick her toes. You can’t have everything. 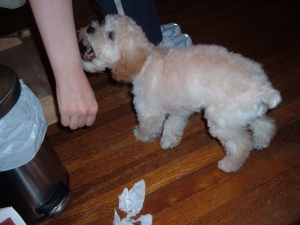 “I wouldn’t have hurt her, Mommy. I only like to bite you.”