Cricket and I used to do a two mile walk around the neighborhood, when the weather was right and we’d been cooped up too long in the house. I’d fill a bag with her necessities: a Tupperware cup full of water, extra poopie bags, and a paper towel or two in case of emergencies. Cricket knew that a bag like that signaled a long walk and once she had her leash on, she raced down the stairs with the leash flailing behind her and jumped up to reach the door knob with her nose. She had to wait for me to turn it, though.

The first few minutes of the walk were a blur of effort for her, dragging me, like a horse with a plow, past the corner and down the block until we had truly reached THE WALK ZONE, which was at least a block past the shorter PEE ZONE. Then Cricket could focus on her sniffing without fear that it would all end too soon.

Walking smoothes out her brain chemicals, and the neighborhood fills her up with smells and experiences that keep her mind busy for hours afterwards. She doesn’t mind hot weather, or cold weather. In fact she would drag me out in ice and snow if she could, though not rain, raindrops are like poison darts on her head.

Walking with Cricket helps to calm me down, too. If I wake up anxious, which I usually do, with twenty different ideas of what the day should hold running through my head, I take Cricket out for a walk, and burn off the extra energy. Walking with Cricket, instead of on the treadmill, has the added benefit of forcing me outdoors, where there are beautiful things to look at. My neighborhood is especially beautiful, filled with dogwoods and maples and birds and flowers, and the ground isn’t flat, so when we go up and down the hills, we get a whole new look at the view.

I still try to take Cricket out on her walks around the neighborhood, but in the forty-five minutes it used to take to do two miles, I can barely do one. Some days, I just walk slowly. Other days, my legs go wonky, and I look like a marionette. My hands curl up and my face twitches. On those days, walking uphill is like climbing Kilimanjaro and walking downhill is a race against gravity.

The doctors don’t know what’s wrong with me, but Cricket doesn’t mind if I walk funny. She runs circles around me when I’m slow, and gets twice the exercise in the same amount of time. Or she goes out with her Grandma, and barks all of the details of her adventure to me when she returns.

I wish I could put her on the treadmill to help her burn off the energy left over after her shortened walks. I worked on that with her when she was little. I built her up gradually, from standing on the unmoving treadmill, to walking at the slowest speed for two minutes. But then, abruptly, she changed her mind about the experiment. Maybe she decided that she didn’t like the ground moving under her feet, or she didn’t see the point of a walk with no peeing component and nothing to sniff.

My dream is to be healthy enough to take Cricket out for the longest walk she can stand. She will empty her bladder so completely that even she can’t believe she has any more pee left to give. She’ll drink all of the water in her Tupperware cup, and meet as many dogs as she can. And then, without any prompting from me, she will look up and say, Mommy, I’m ready to go home. 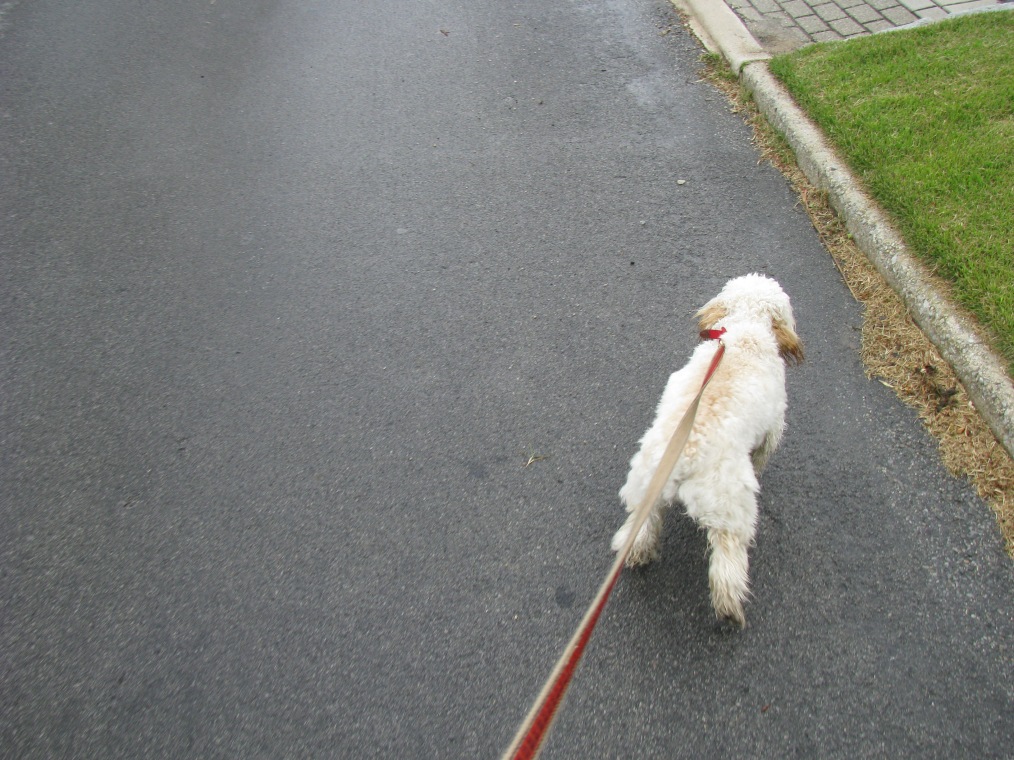 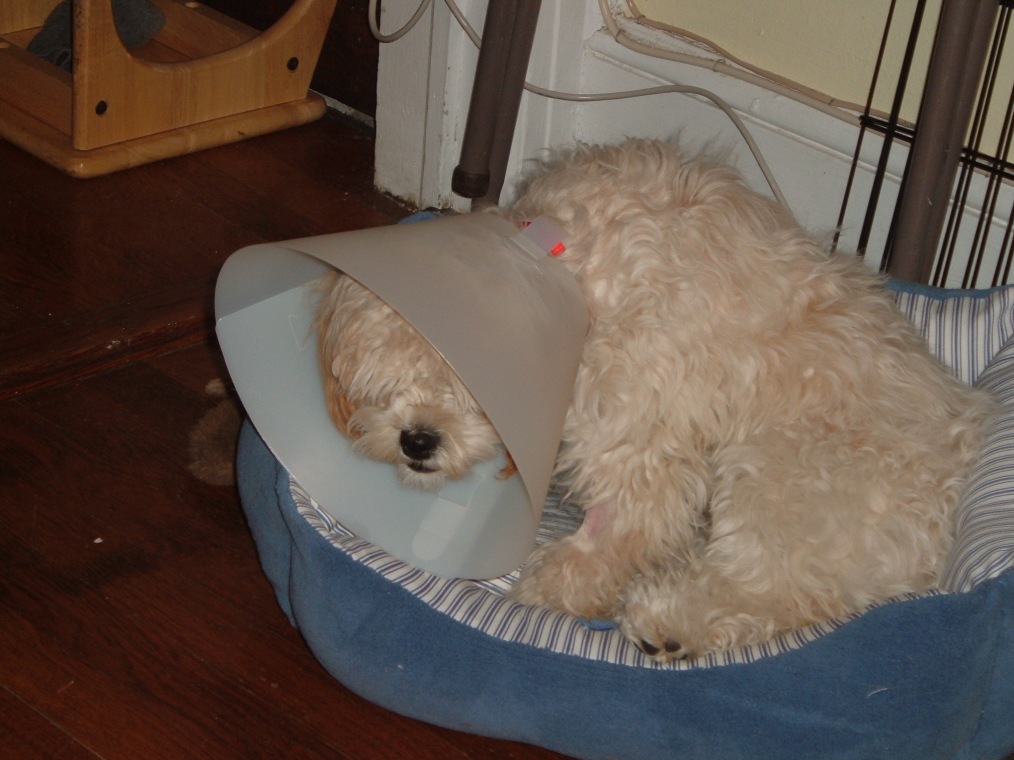 When Cricket was six months old, it was time for her to go to the vet to get spayed. She’d had all of her shots and reached the required weight and the earlier we got it done the less traumatic it would be for her, or so they said.

My previous dog, Dina, didn’t get spayed until she was eight years old, because my father forbade it. We had to wait until my parents split up and Dina came with me and mom before we could take her to the vet and even find out if the operation would be safe, or helpful at her age. She’d spent years having false pregnancies and hormonal mood swings that left her half crazed and hiding under beds. Finally having the operation meant that her second eight years were much calmer, and happier than her first eight.

I wanted to do everything right with Cricket and we had no plans to breed her, so the surgery was in her best interest, health and mood wise, but it still seemed wrong to make such a big life decision without her input. It seemed wrong to call such a surgery “being fixed,” as if humans would feel like they were improved by becoming sterile.

I was conflicted, but we decided to get the operation done anyway.

The long day started for me the night before the surgery, when we had to search out all of her treats and rawhides and put them away so she couldn’t sneak food after nine o’clock – because having food in her belly would make anesthesia dangerous. No one said she could die, but that’s how it reverberated in my head. I trusted the vet, and the girls who worked in his office, but I was still afraid. They might lose her special squeaky toy, or cut the wrong things out. Or they could return the wrong dog to me and I wouldn’t know the difference.

As soon as we’d dropped her off at the vet the next morning, I went home and started cleaning the apartment; the floors in particular, because Cricket liked to participate too much, chewing on my hands, fighting the broom, destroying the mop, and barking at the vacuum cleaner. This was my one chance to get the work done, unobstructed.

But with each passing hour, I felt younger and more anxious in the silence of no puppy. I didn’t feel like a warrior mother, ready to break down the walls of the animal hospital if they hurt my baby. I felt inexplicably helpless. Cricket was my fluffy, happy girl, full of life and full of piss and vinegar, and I was afraid that the surgery would change that about her, depress her, make her too much like me.

We called the vet at One thirty in the afternoon, to see how the surgery went, and they said she was fine and sitting up in her cage, but would need a few hours to recover before we could take her home. I should have felt relieved, but I didn’t. I couldn’t relax, or focus on much of anything. I grated sweet potatoes for a new latke recipe, walked to the library for knitting books, vacuumed again, but I kept thinking: I want puppy. Where is puppy?

We had to wait a while when we reached the vet’s office, because they’d found her chewing on her stitches and had to clean her up all over again, and add the plastic Elizabethan collar to stop her from reaching the stitches. When they brought her out, she pawed the collar off her head onto the floor. So that was a few more minutes of figuring out how to loop the plastic collar through her own collar to make it stay on and, finally, she was ready to come home.

I examined her in the backseat of the car while mom drove: her scar was raw, like meat, as if her skin was on inside out. The stitches were black.

She struggled walking into the house because she couldn’t see past the collar to figure out where the walls were. And she was exhausted. I carried her to her puppy bed, but even then, she couldn’t get comfortable.

But once the drugs wore off and her stitches started to heal, she was puppy all over again. She didn’t roll her eyes at me and point at her scar and say, Bad Mommy, the way I expected her to. She only hated me a little, and she milked it for a few weeks, asking for extra treats and scratchies and curling up with grandma whenever possible. And of course she healed. I’m just not sure I did.