Butterfly is diabetic, and she has created a ritual for her morning blood test. She sees that I am going to the shelf where her testing kit lives, and with great excitement she runs to the hallway. She makes sure that I can see her, and then runs a few feet away, and then she turns back to check on me, to make sure I’m following her. She makes a dance of it, turning back three or four times down the fifteen foot hallway, bouncing on her toes in between twirls. 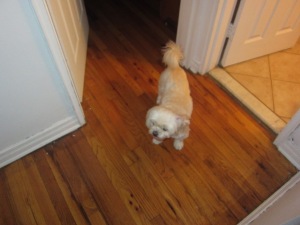 “Aren’t you coming to the bus stop, Mommy?”

Then she lands at her bus stop in Grandma’s room. And I mean lands. She flattens herself into a down position and waits for me to pick her up. Then I carry her back to the living room, sit her on my lap, and start the testing procedure.

At first, when it came time to pick up Butterfly for her blood tests, Cricket would escape to her apartment under the couch. She was very concerned that this blood testing idea would spread, like a virus, like a bath-giving, haircutting virus. But over time she started to notice that not only was Butterfly the only target for the needles, there was also a very reliable treat give-away after the test. So Cricket began to sit by my feet as Butterfly’s blood was tested. I even caught her sniffing the testing kit once, as if she could smell the chicken treats by association. 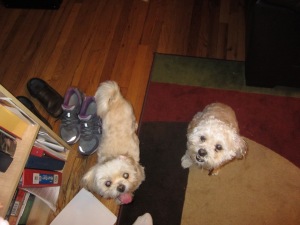 We take blood twice a day from Butterfly’s tail. We tried the veins in her ears, and her paw pads, and the callus on her elbow, but none of them worked, and then I saw a YouTube video of a dog getting her blood tested from her small cropped tail. Butterfly’s tail is long and skinny, so I wasn’t sure if it would work the same way, but there’s blood available every time and it doesn’t seem to bother her, much.

Her insulin shot goes into the scruff of her neck and usually doesn’t bother her either, but sometimes I hit the wrong spot, or maybe the cold temperature of the refrigerated insulin bothers her, and she flinches. But it’s over in a second and then she’s ready for treats. She never runs away or growls or tries to bite me. Thank God all of this isn’t going on with Cricket. I’d have no fingers left.

If Butterfly’s blood sugar is low, which it often is in the morning, she gets a special bone treat, made with whole wheat flour to raise her blood sugar just enough. Mom got this Bake-A-Bone toy for Mother’s day or her birthday this year from my brother’s family, along with books of recipes for special foods for dogs. I think Butterfly has been talking to their dog, Lilah, and trying to influence the gift choices over there.

But if the blood sugar is normal-ish, or high, the girls share a chicken treat. They know where the bag is. They go straight over to the book case and stare up at it. Cricket has even tried to climb the shelves, unsuccessfully. They pull out all of their circus dog tricks if the treats fail to come as quickly as desired. Even Butterfly has learned how to stand on her back legs with her front paws in prayer pose, though she can’t maintain the pose as long as Cricket can. Then Butterfly takes her share and runs to the hall to eat alone. And Cricket inhales her treat whole, coughs a bit, and then stares at me expectantly as if I never gave her a treat at all.

The other day, in the middle of the afternoon, Butterfly had a partial seizure. Her eyes started twitching, her legs wobbled, she walked in circles and couldn’t see clearly, and her body shook. When I calmed down, I tested her sugar and it was very low, the lowest it had ever been. We gave her maple syrup – applied to her gums the way the doctor told us to do, so she’d have no choice but to take it in – and within thirty seconds, she was herself again.         Her doctor warned us about listlessness and even coma, but he never mentioned partial seizures, so thank god for doctor Google.

And Now Butterfly is back to normal. I can be sitting on the couch, or at the computer, or trying to sleep, and she’ll come over as if something very exciting is about to happen. She’ll dip her head and smile at me, and then she’ll run. If I’m too slow, she waits for me, every step of the way, because she wants me to catch her. She wants to flatten out on the floor and get scooped up like a rag doll. It’s her favorite thing, chicken treats or not.

I am a fiction writer, a writing coach, and an obsessive chronicler of my dogs' lives.
View all posts by rachelmankowitz »
← The Neglected Cricket
Puppy Dreams →