A mezuzah is a totem, a sort of anti-goblin device slash symbol of Jewish identity that Jewish people are supposed to place on our doorways. The mezuzah itself is a rolled up parchment inside of a decorative case and the parchment comes from the bible and basically reminds us to love God, and believe in God, and keep the commandments, and pass it all on to our children. 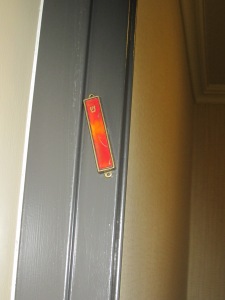 You’re supposed to kiss the mezuzah – or kiss your fingers and then touch the mezuzah – every time you enter or leave the room, but I don’t have the patience for that. I have my one mezuzah at the front door, and I notice it when I walk in, and it gives me a feeling of familiarity. I happen to think my mezuzah is pretty.

The only other thing we have in front of the apartment door is a red welcome mat that almost always has a few pieces of kibble on it. So, welcome, dogs live here. We also have a table out in the hall with plants on it, and there are plants outside the front door of our building, and a turtle made of painted rocks. So we have a few things that announce who we are – Jewish dog people with lots of plants and an interest in turtles.

When my brother’s family came to visit, my niece Lilah, the black lab, who had only been here once before, raced up the stairs and went straight to our door without anyone reminding her where to go. She knew which apartment smelled right. Eau de kibble sends the message. 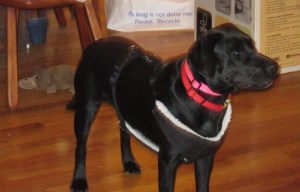 Lilah chasing Cricket in the snow.

But a mezuzah shouldn’t just be a sign to other Jews, as if only Jews should feel welcome in my home. I feel more like the mezuzah announces who I am, so that you will feel more comfortable telling me who you are.

I like symbols. An idea is elusive, but a physical symbol is visceral and concrete, and makes things easier to remember. I’ve considered dog related symbols for our front door too. The shelter where we adopted Butterfly gives out huge paw magnets that you can put on your fridge, and car stickers, and sweatshirts, and blankets, and on and on. But, by the time you get close enough to my door to see a sticker, you will have heard Cricket barking at you from inside, so the sticker would be kind of irrelevant.

I’m not comfortable wearing a star of David necklace. I had one, but I kept yanking at the chain until the chain broke, two or three times. Maybe the necklace felt too reminiscent of the yellow stars Jews had to wear during the holocaust, or maybe it’s just that the necklace I had came from my father’s mother, and she grossed me out.

I wear my Koru instead. It’s a New Zealand/Maori symbol of new birth – an unfurling fern – and I wear it to try to remind myself that I can start again every day. I don’t have to be stuck in the past, even if the past is the bad day I had yesterday. It’s not a religious or spiritual symbol for me, it’s a reminder, like a rubber band on your wrist (I tried the rubber band idea first, but it hurt too much).

My Koru, and hair.

I’m afraid to post this now, given the current situation in Israel. I feel vulnerable when I watch the news. When I heard about mass protests against Israel in Europe, and anti-Semitic slurs on college campuses, I couldn’t help but feel frightened.

My girls, and Ducky too.

I am a fiction writer, a writing coach, and an obsessive chronicler of my dogs' lives.
View all posts by rachelmankowitz »
← A Post about Sleep
Hairy Dogs →