RSS Feed
← To the Library we go
Butterfly and the Hairball →

The Battle Hymn of the Nap

Cricket is prone to fits of crazy digging. She’ll dig outside in the dirt, if she can, but most of the time she digs on the rug, on my bed, or under the couch. And there is a vocal accompaniment to what she’s doing with her paws. I would call it ululating, except that there’s a lack of musicality to Cricket’s version; her rhythms are chaotic, and her pitches unrecognizable. She sounds kind of like a high pitched car alarm on speed.

Very often, her crazy attacks of digging are part of her preparation for bedtime. Cricket is like a toddler who is exhausted, but enraged that she has to go to bed. She loses her mind, racing around in circles, picking up toys and growling and crying. She doesn’t want to be overtaken by sleep; it’s an awful fate that she has to fight off like the monster it is.

She does the same things whether it is a daytime nap or a nighttime nap: she will either do a running jump up onto my bed from the doorway, or stand next to my bed and try to jump from a standstill, which usually takes five or six tries; when she’s finally up on the bed, she starts digging at the sheet, and crawling under the blanket to dig in the dark; the digging speeds up and the ululating kicks in, and then she starts to push the blanket around, creating a fort; and then, finally, she falls asleep, in her fort.

Cricket in her fort.

Butterfly has a different bedtime ritual, which requires me to chase her around the apartment for some period of time, and then pick her up from the floor, and carry her to her blanket on my bed. Sometimes she is very excited and hops around the apartment, sticking her tongue out and smiling at me. Other times she is more of a little princess, waiting to be lifted and carried to her throne.

Sometimes, when I pick Butterfly up for nap time, something about the slight squeeze around her middle makes her fart. Cricket’s farts are silent and stinky, but Butterfly’s farts are musical. It’s a bit like the sound of the shofar on Rosh Hashanah, or a kazoo, played staccato. Once, when I picked Butterfly up to carry her to my room, Cricket was walking ahead of us, and Butterfly made one of her musical farts. Cricket turned around and sniffed her own butt, to see if that’s where the fart came from. 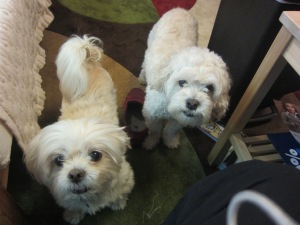 When Butterfly is really tired, she just topples. She’ll walk down the hall to my room, alone, and plop down on the rug, to let me know that I have kept her up too late. There’s no running or jumping or raging at the dying of the light, there’s just motionlessness.

When Cricket is in a particularly dastardly mood, she sees Butterfly resting comfortably on my bed and starts scheming. She’ll run to the front door and start barking, as if something very important is going on and she needs all hands on deck. Butterfly, being a loyal sister, she shakes herself awake and rushes down the doggy stairs to help Cricket in her time of need. Within seconds, Cricket runs back into my room, jumps up on the bed, and stretches out on Butterfly’s blanket, leaving Butterfly stranded on the floor, because she doesn’t know how to climb back up the doggy steps. 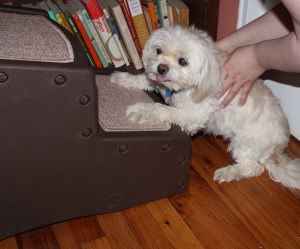 If this had happened only once or twice, I would give Cricket the benefit of the doubt, but it happens on a regular basis. Butterfly just accepts her fate, and goes to sleep on the rug, one ear up, ready to respond to her sister’s next call to arms, while Cricket snuggles in for a long, comfortable nap, on the bed.

I am a fiction writer, a writing coach, and an obsessive chronicler of my dogs' lives.
View all posts by rachelmankowitz »
← To the Library we go
Butterfly and the Hairball →