Why Don’t Dogs Have Gynecologists?

“What’s she talking about?”

I’m supposed to go for a mammogram this month. I went for my baseline last year, and the doctor wants me to go every year now, despite recommendations to the contrary out in the world. I almost fell down halfway through the test last year as they pressed each breast into the squeeze machine three times. How can this be the state of the art? Is someone under the impression that breasts can’t feel pain?

I’m afraid I’m not going to be able to push myself to go to the appointment, and my doctor will be mad at me for not doing it, and I will inevitably develop breast cancer and die and it will be my fault because I didn’t want to faint in the radiology office.

I’ve never heard of a gynecologist for dogs, though you never know what’s out there, somewhere. My dogs haven’t had to get mammograms. I can’t even imagine how that would work. Cricket thinks that having the goop removed from her eyes is the worst humiliation; can you imagine trying to squeeze some sensitive part of her anatomy until it is flat? 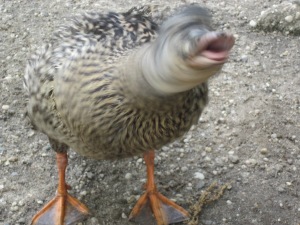 I wish I could be more like Cricket, and feel like I have the right to refuse these humiliating tests, or at least to bite the person who tries to perform them on me. I feel like women need to rise up.

The thing is, veterinarians go into veterinary medicine almost always because they love animals and have compassion for them. Whereas doctors for humans often go into medicine because of the steady income, the prestige, or an interest in science. And gynecology? I don’t think too many kids grow up dreaming of becoming gynecologists.

I went to my first gynecologist when I was in my late twenties. I had been putting it off to avoid the inevitable panic attack and having to talk to a stranger about my sexual abuse history. I told the doctor my story as quickly as possible, and she seemed sympathetic for a minute, but then she told me to get on with my life. She said that my health would be better once I had babies, because that’s what the female body is meant to do. And then she complained that my body made the internal exam “difficult.”

The next gynecologist seemed more down to earth. She listened to my spiel about sexual abuse, and promised to be careful with me, and asked questions. True to her word, she did her best to avoid hurting me during the internal exam itself, but as soon as I sat up, in my cloth gown, on the edge of the metal table, I started crying uncontrollably, and she said, “Are you sad that the exam is over?”

She meant to be funny, but her cluelessness for how that would sound to a sexual abuse survivor was bizarre. I don’t understand why female gynecologists are not more sensitive to this, given that the conservative estimate is that 1 out of 4 women were sexually abused before the age of 18. But, even if I had no abuse history, it would be normal for a woman on a table, being poked internally with a piece of metal, to be uncomfortable and self-conscious. And yet the doctors seem impatient with this.

My current gynecologist is pretty matter of fact. At the first exam, after a discussion, fully clothed, in her office, and changing into paper clothes and having to shimmy down the table, she tried the regular speculum and then said no, let me go get the one we use for the nuns.

She works in a large office, next door to a plastic surgeon, and around the corner from a cancer treatment center. It’s not comforting. It’s like a one stop shop for women: get birth control, have a baby, get cancer, get your breasts redone, get cancer again, go into remission, and then celebrate living a long life by getting a facelift.

I go to the gynecologist because I have to go, but I dread it all year. I’m not saying I’d rather be a female dog, but sometimes I wish I felt free to act like one.

I am a fiction writer, a writing coach, and an obsessive chronicler of my dogs' lives.
View all posts by rachelmankowitz »
← Cricket’s Commandments
The Cuckoo Clock →