RSS Feed
← I Finally got a Smartphone
Dance Therapy →

A few years ago, I started working on a children’s story about a clumsy bird, but I couldn’t figure out how to finish it. I knew who the main character was: if there was a tree or a power line or a roof in her way, Lola would smack into it. Her mom took her to every doctor she could find and the bird doctors did every possible test on Lola. They diagnosed her with bad eyesight, then partial deafness, attention deficit disorder, maybe a neurological movement disorder of unspecified origin, or bird seed intolerance, but nothing seemed to stick.

The last doctor Lola went to was a specialist in flying disorders. He squeezed Lola’s feet, and rotated her wings and had her fly to and from his medical nest twenty times. And then he stared into her eyes, with his wormy breath going up her nose, and said, “You’re fine, go away.”

The flight back home was long and Lola’s Mom had to tie a rope between them to avoid an accident along the way.

Of course Lola had an older brother, who was embarrassed to be seen with her. And mean girls in her flying class (aka gym), who made fun of her for her awkward flying technique and tendency to fall out of the sky.

There was a boy bird in Lola’s class who was taunted for being “as blind as a human,” because he couldn’t see where he was going as well as everyone else could. Lola was nice to him, thinking they were in the same situation and could offer each other support, but he resented her sympathy. He called her clumsy, and taunted her along with the rest of the class, just to feel like at least he wasn’t as low down on the social ladder as she was.

I kept looking for ways for Lola to save herself. She was an inventor, by necessity, and created parachutes and nets and trampolines out of whatever she could find in the garbage. She spent months in physical therapy with the seagull at the beach, who was a little too hard core. He made her stand on pebbles to stretch the webbing in her feet, and wrap her wings around the trunk of a tree, and then he’d drop her into freezing cold water to shock her brain, but nothing changed. And then she was sent to the wise goose, who worked at the median of the main road. He spoke in riddles, while walking in constantly changing patterns to help retrain her brain. It didn’t work, but at least with the goose Lola felt less self-conscious, if only because he wasn’t like anyone in her own community, and he didn’t laugh at her for being different. 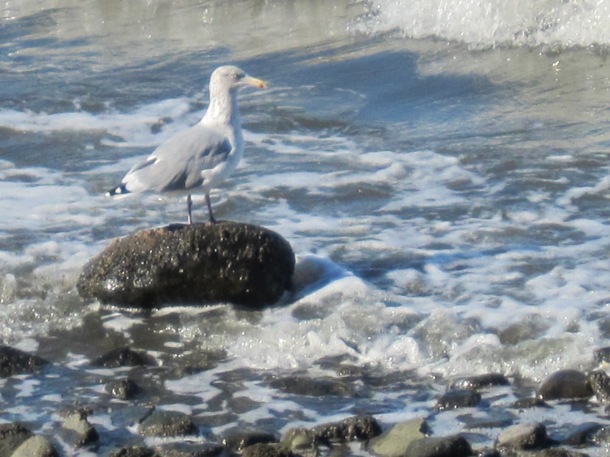 This bird is one hard core trainer

But what I really wanted was for there to be something in the bird world that would work better than in the human world. I wanted the elders of her community to come up with a non-stigmatizing way to help the disabled birds who lived amongst them. I imagined bird community conferences, with the elders sitting in the sacred tree, and the younger birds left to line up on the telephone wires, but I couldn’t figure out how to make the birds creative and compassionate enough to make the clumsy bird feel welcome.

I have this block against writing better endings for my characters than I have experienced for myself. It feels like lying in a way that fiction doesn’t usually feel like lying, to me. But I want better for Lola than to have to be in it alone, hitting up against walls that shouldn’t be there. I just don’t know how to get that for her.

I am a fiction writer, a writing coach, and an obsessive chronicler of my dogs' lives.
View all posts by rachelmankowitz »
← I Finally got a Smartphone
Dance Therapy →