Cricket, Protector of the Bed

Cricket is a protector by nature. She is a small, fluffy, guard dog, with teeth she’s not afraid to use. But she seemed to believe she had to protect my bed, from me.

My room in the old apartment was an attic, with a slanted ceiling, and lots of shadows. Cricket knew, long before I did, that mice were cowering in the invisible corners of the room, behind bookcases and storage boxes, in the recessed closet and behind the unused radiators. 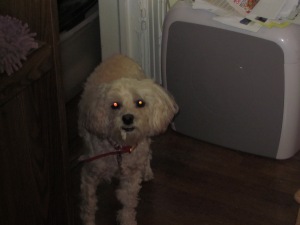 When I walked into my room, she would stand by the edge of the bed and lower herself into attack position. As I stepped closer to the bed, she would slink toward me and bare her teeth, and when I reached the two foot perimeter, she would attack. Bark! Bark! Bark! Grr! Until I was safely ensconced on the bed and no longer a threat. Then she would jump up and snuggle next to me.

The bed protecting persisted no matter what I tried to do to distract her. I threw toys to her, I told her to sit (which she did, and then she popped right back up), I said Ouch.

Heaven help me if I tried to change my clothes anywhere near her zone. I learned to change in the bathroom with the door closed.

I think I must have brought a lot of ghosts with me from my childhood home to that apartment. Cricket certainly thought so.

It’s possible that she had done some doggy voodoo to clear the monsters and ghosts from the bed, and when I went upstairs to go to sleep, I brought new ghosts with me, threatening to undo all of her ghost busting work, so she had to bark and snarl and snap to scare those ghosts away.

I tried hard not to take it personally. Once I was safely on the bed, the barking abruptly stopped and Cricket could jump up on the bed for a scratch or a snuggle. Maybe this was her version of tucking me in at night.

Cricket tucking me in, sort of. 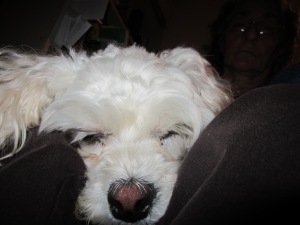 The fact is, I saw the shadows too. I worried about monsters under the bed, and ghosts in the closet. I just didn’t have the nerve to bark them away, like Cricket did.

In the new apartment, I never worry that there are monsters under the bed, or in the closets, or waiting outside the windows. It’s shocking to realize that they are gone, and that Cricket sees that they are gone, and has given up on protecting the bed. Partly, I’ve hedged my bets by keeping plastic storage boxes full of clothes under the bed so the monsters would have to be pretty skinny and dexterous to make their way in.

Every once in a while when I put my feet over the side of the bed, I’ll find Cricket there barking at me, and tugging at my socks, but it’s a mostly vestigial behavior. Her protective duties now seem to be focused on the front door of the apartment, where she makes sure that no dangerous creatures can steal their way inside on her watch.