Cricket is on Prozac

A few weeks ago, when I was getting fed up with the overwhelming balls of goop under Cricket’s eyes, I went to pick her up to address the problem and she bit my hand, twisting the skin with her teeth. The pain was extraordinary.

Cricket has a prescription for ACE, the doggy version of Xanax, for her trips to the groomer, but clearly, she needed more help. So for this year’s check up with her veterinarian, I planned to ask what else we could try.

I think this was Cricket’s first solo outing since we brought Butterfly home almost a year ago. When she realized that we were on our way to the car, without her sister, Cricket was jumping and skipping with glee. She loved being an only dog again, even for a little while.

Back when Cricket was an only puppy.

She wasn’t as thrilled when we reached the vet’s office, though. She sat on my lap, and then behind my legs, and then she jumped up on Grandma’s lap and started all over again.

There is a bird in the waiting room at the vet’s office who is as much of a scratchy glutton as Cricket. He’s a parrot. An African Grey, I think. He stands in his cage and rings a bell to get attention. When Cricket moved over to Grandma’s lap, I said Hello to the bird and he walked over to my side of the cage and bowed his head for scratching. It was a strange feeling to scratch through feathers. They were soft and small around his head, and I worried that I was pulling them off as I scratched. But when I backed off, he bit the cage and cried and re-bowed his head insistently. He was really quite demanding. And regal. He bowed his head with noblesse oblige, as if to say, I accept your tribute, oh, dog person. 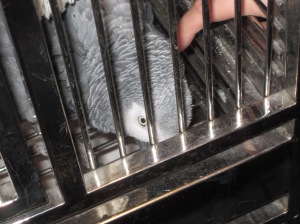 “You may scratch my neck.” 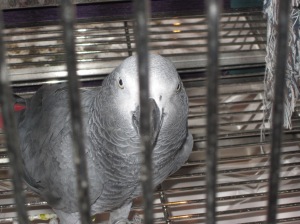 I had to leave him behind when we were called into the exam room, and he rang the bell to try and call me back. I was quickly distracted, though, because Cricket was busily looking for a place to hide, and when she couldn’t find one, she asked to be picked up. I tried to hold her in my arms, but she climbed behind my neck and stood on my shoulders, gripping my hair for dear life.

The vet is used to her, and her kind. He always has to call in one of the vet techs to hold Cricket in place while he takes her blood and gives her shots. God forbid they have to clip her nails or remove hair from her ears, but we didn’t have to deal with that trauma this time, so I won’t think about it.

When I asked the vet about Cricket’s anxiety issues, he recommended a trial of Prozac. I’ve been putting off asking for such a thing for years. I hoped training would help, or that Cricket would just grow out of it, or that Butterfly would help calm her down, but nothing has really worked.

I’ve gotten to the point where I’m less concerned about her behavior and more worried about how she feels. She doesn’t enjoy barking and being on guard all the time. She often looks grumpy and depressed, and worried. I’d love to be able to make a dent in that for her.

The vet said that, other than the crazy, Cricket is in wonderful health. All of the anxiety and barking certainly keeps her weight down.

When we got back home, Butterfly had to do a full sniffing investigation to find out where Cricket had been. There were a few odd smells, like the rubbing alcohol where the doctor took blood, and the faint smell of bird, but Butterfly was satisfied, both that Cricket was unharmed and that Butterfly had not missed out on anything good. 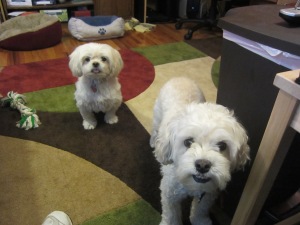 “Cricket has passed the smell test.”

Every morning now, Cricket takes her Prozac in a piece of sausage, and while she enjoys the sausage, I think what she likes most is that Butterfly doesn’t get a piece of her own. We’ve discovered that people food makes Butterfly pee in the house. Maybe if we could find a medication to stop the pee, Butterfly could have morning sausage treats too.