A few years ago, I collected a bunch of Cricket’s toys and put them into a bucket on a shelf under the TV. The plan was to switch out the toys from the bucket every week or two, so that she could have the benefit of all of her toys, without spreading them on the floor where I would trip over them. Of course, I got distracted and forgot about the bucket of toys a long time ago. At around the same time, I stopped taking Cricket for her three mile walks each day, and she definitely noticed the difference and has perfected her disappointed-with-Mommy face.

Recently, I watched a story about a man with a movement disorder who went to a special kind of occupational therapy, with not only a human therapist but also a doggy therapist. The exercises required the man to put treats into treat puzzles, in order to rebuild the strength and flexibility in his fingers. His reward was to watch the dog chasing after the toys and enjoying the treats. The smile on the man’s face when his knotted hands were successful at fitting the treats into the toys, and the dog ran across the room after the toys, was pure joy.

And it occurred to me that we might have some of those toys; not the flat puzzles with secret compartments, but the plastic toys in different shapes that would allow small amounts of treats out if Cricket could figure out how to make them bounce the right way. We’d bought a ton of toys for Cricket when she was an incorrigible puppy, in order to keep her from continuing to destroy the furniture with her sharp puppy teeth. And in the bottom of the bucket, under the everlasting chew toys, and the purple dinosaur that has dried into a husk of its former self, I found three treat puzzles of varying sizes and levels of difficulty. 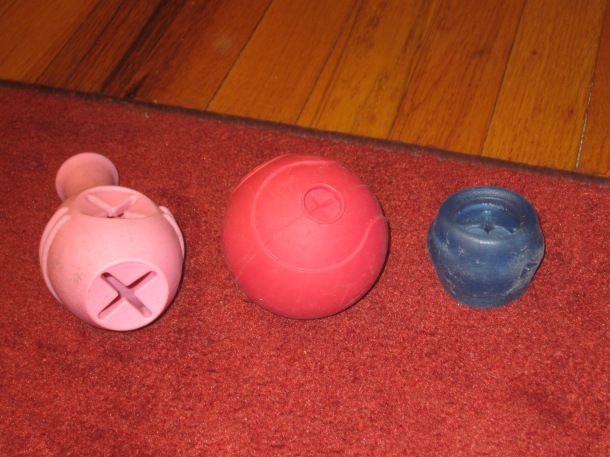 Cricket has been needing more attention and distraction since Butterfly died, and even more so since it’s been too cold for Grandma to take her for extended walks in the afternoon; those garbage cans up by the 7-11 were an endless source of fascination. So I was willing to try something new to keep her busy, and, hopefully, happy.

I had to do some significant cleaning on the old toys – boiling them with baking soda and rinsing thoroughly – before I could risk putting food in them again. For my first experiment I used the pink vase-shaped toy. I was worried that I’d made the pieces of Pupperoni too big, and Cricket would go straight past optimal frustration into the land of rage and disappointment, but, actually, she loved it, and was busy for hours. She was actually disappointed when I gave her next treat toy to play with, the red ball, and she was able to empty it within minutes. Cricket likes a challenge. 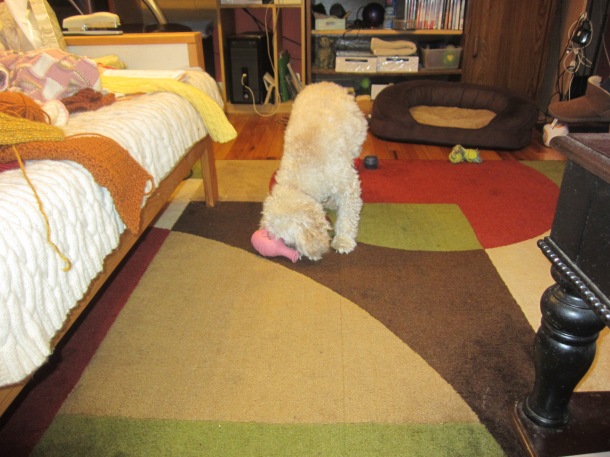 This is where Cricket uses her head. 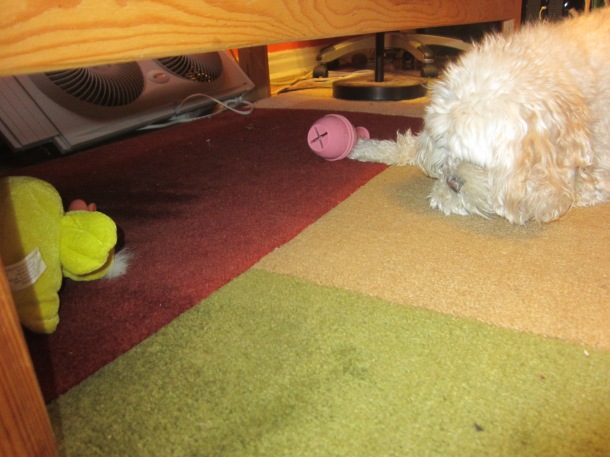 This is where Cricket guards her toy from the humans.

Now, if I try to let a day go by without filling the pink vase toy with treats, she gets grumpy, and insistent. She stands next to me as I fill up her toy and then she tosses it around the room, and hoards it under her couch, and does everything she can think of to make it give up its riches. I’m pretty sure that my face looks very much like that man in the occupational therapy video, full of joy, as I watch Cricket running after her toy and bouncing it into submission to get every last treat.

Now, if only I could figure out how to set up a drone to take her for walks when it’s too cold for me. Does anyone know if a drone can be programmed to pick up poop?