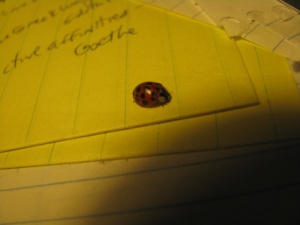 One day a few years ago, I noticed that I was being followed by ladybugs. There would be one on the wall behind my bed, then another one on my dresser, then out on the porch and on my wrist. I asked around, in case there was a surplus of ladybugs and everyone was having this experience and I was told, instead, that ladybugs are lucky.

Now, I have not been an especially lucky person. I don’t win contests or get discovered in malt shops. I gain weight easily and get injured easily. I tend to wish on eyelashes more than I should. But these ladybugs kept following me around.

A few weeks ago, there was a ladybug on my bedside table for twenty-four hours. At first, I thought it had come here to die. It was so still. I tried to move papers out from underneath it, and it didn’t move. But then mom nudged it with a finger, because she’s braver than I am, and it lifted its wings for a second and then settled back down. Maybe it liked having the light of my table lamp aimed at its back, maybe it was doing a little light reading, or maybe it had something it wanted to tell me.

I felt honored to be chosen like that. Honored to be the safe place for a ladybug to rest and recuperate or to pause before the next big journey. I wondered if my luck would change now that a ladybug had chosen me.

But in the research I did online it said the ladybug has to land on your body to bring good luck, and she didn’t do that. She stayed for twenty four hours and then disappeared.

Then, just recently, the ladybug returned, crawling up the length of my red comforter, looking like she fit right in. She walked right up onto my hand and then flew to my shoulder and tried to crawl up my neck and into my hair. That was a bit too creepy for me.

But is it the same lady bug? Is she persisting in trying to get her magic across to me? I would like to believe that. I would like to believe in the power of magical thinking, not just as an anti-depressant, but as an agent of change in the world. Just like prayer has been proven to have an effect, not just on the person who prays, but on the people she prays for, I want to believe the same about ladybugs. That just the act of wishing for and believing in luck can change the energy in the world, and change what happens next. 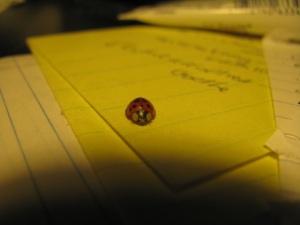 I am a fiction writer, a writing coach, and an obsessive chronicler of my dogs' lives.
View all posts by rachelmankowitz »
← Solomon, the dastardly Doberman
Delilah’s Puppies →