RSS Feed
← All Her Children
The Afternoon Nap →

We have two couches in our living room. The shiny new leather couch has no real underneath space, and Cricket finds this very upsetting. She will lie down under the stand-in-for-a-coffee-table, or, she will go to the other couch, the IKEA couch that used to be in my room in the old apartment. 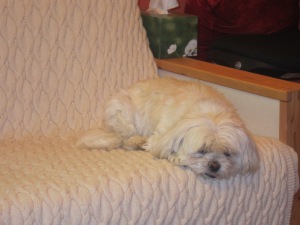 Butterfly on top of the IKEA couch, sniffing the Rachel-made blanket for comfort

Cricket has very strong feelings about enclosed spaces. She loves them. She can slither under things like a snake, using her paws for propulsion and bending her legs in at her sides like pretzels. She has an apartment under my bed, and one under Grandma’s bed, and one under the coffee table and one under the couch. These apartments are a good place to go when humans are trying to steal the goop from your eyes, or give you a bath. 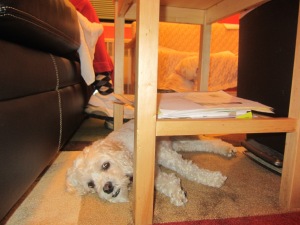 Cricket also discovered that while she can crawl under the IKEA couch, Butterfly has trouble scrunching down that low, which meant that Cricket could steal Butterfly’s chewies and hide them under the couch, where Butterfly couldn’t reach. But Cricket did not understand that, while she enjoys chewies, Butterfly is a chewie addict. And that addiction gave Butterfly the motivation to teach herself how to lower down, and scoot her shoulders under the couch, just enough to steal the chewie back. 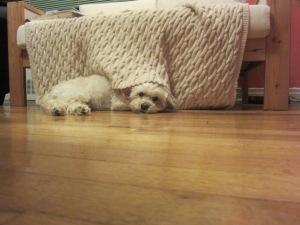 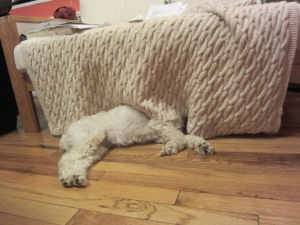 Cricket has lost her head

Butterfly’s head and trunk are much wider than Cricket’s, and she is much less flexible, so the first time she managed to retrieve a chewy from under that couch I cheered like I was at a sporting event. I was so proud, and she was so gleeful, and Cricket was glowering at both of us. I grew up with an older brother, so I know something about being smaller and weaker, and it was nice to see a little one prevail. 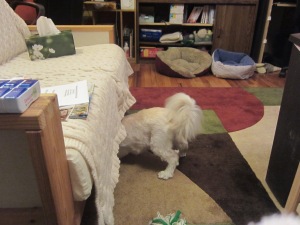 That is Butterfly’s tail!

In fact, Butterfly has taken to dropping her own chewy on the floor, running over to the couch, scrunching down, and stealing Cricket’s chewie, on principle.

I really shouldn’t enjoy this as much as I do.

I am a fiction writer, a writing coach, and an obsessive chronicler of my dogs' lives.
View all posts by rachelmankowitz »
← All Her Children
The Afternoon Nap →